Last week, SAP Business Warehouse  7.3. This is just the upbeat for the launch of the next big version of BW which is planned for later this year. This will provide major new features to the existing, more than 20000 active BW installations which make it one of the most widely adopted SAP products. I like to take this opportunity to highlight a few focus areas that shape this new version and that lay out the future direction.

First, let me sift through a notion that many find helpful once they have thought about it, namely EDW = DB + X. This intends to state that an enterprise data warehouse (EDW) sits on top of a (typically relational) database (DB) but requires additional software to manage the data layers inside the data warehouse, the processes incl. scheduling, the models, the mappings, the consistency mechanisms etc. That software – referred to as “X” – can consist of a mix of tools (ETL tool, data modeling tools like ERwin, generated or own programs and scripts, e.g. for extraction, a scheduler, an OLAP engine, …) or it can be a single package like BW. This means that BW is not the database but the software managing the EDW and its underlying semantics. 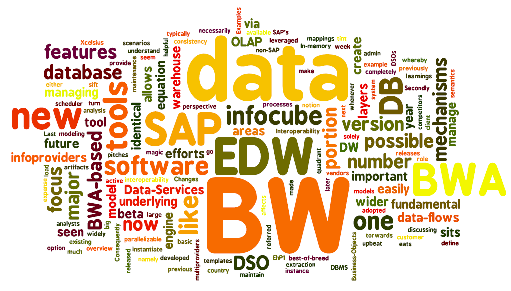 In BW 7.3, this role becomes more and more apparent which, in turn, is also the basic tint for its future. I believe that this is important to understand as analysts and competitors seem to focus completely on the database when discussing the EDW topic. Gartner’s magic quadrant on DW DBMS as an instance of such an analysis; another is the marketing pitches of DB vendors who have specialized on data warehousing like Teradata, Netezza, Greenplum and the like. By the way: last year, I did describe Comparing SAP BW and an Oracle DW which underlines the significance of “X” in the equation above.

But let’s focus on BW 7.3. From my perspective, there is 3 fundamental investment areas in the new release:

This is meant to be a brief and not necessarily exhaustive overview of BW 7.3. A more detailed list of the features can be found SAP Business Warehouse  7.3. Over the course of the next weeks and months the development team will blog on a variety of specific BW 7.3 features. This links can be found SAP BW Developers SDN Blog Series Accompanying the BW 7.3 Ramp-Up Phase.

Witalij Rudnicki
August 19, 2010 at 3:41 pm
Hi Thomas. I have questions going beyond BW7.3. Hope you can share some information on these:
1/ Coming NetWeaver support for Sybase was announced today. Will it be ASU or IQ in case of BW?
2/ Are there plans to allow BW modeling and reverse engineering through Sybase PowerDesigner? Current BW metadata exchange through OMG CWM XML is pretty limited.
3/ In the light of today's announcement for new SAP mobile platform, what are the plans to allow mobile access to BW for IT - if not for design-time, then at least to run-time components. Would be nice to be able to have mobile access to BW to monitor and troubleshoot starting from RSA1->Administration->Monitors.

Former Member
September 7, 2010 at 11:19 pm
hi,
could you please share more details about Data flow copy tool functionality?
could i get detailed document on same ?

recently I got the message from someone who attend a SAP training that in future in-memory will the only medium to access data.

I think that you have to offer the customer the possiblity to use the memory technology they want to use, this should include:

In my current project we want to use virtual infoprovider in order to access parallel files.

Witalij Rudnicki
October 3, 2010 at 9:38 pm
Hi Guido,
I believe there is a lot of hype on the market leading to missunderstanding.
1/ If you saw Hasso Plattner talking about in-memory, he was talking about NewDB, which is Database, so there is not distinction between your first and second points
2/ "in-memory" is only one of features of SAP NewDB, other are columnar storage (hybrid with row-based storage), so it will be as fast or faster as NLS, that is using (at least in case of IQ-based PBS NLS) columnar storage as well
3/ VirtualProviders are not connected to BW's datastorage at all; if you base them on UDConnect you can read data from almost any external source with JDBC driver and I do not think SAP (I am not SAP employee) is going to remove this feature.
From my side I'd like to ask, what parallel files are you using?
Cheers,
-Vitaliy

I realised this is a bit of an old blog, but I'm curious about your comment 2/ about the performance of the NewDB platform for BW compared to NLS based on IQ.

Do you have any detailed information on this? e.g. comparative performance benchmarks etc.

Is there any direct Upgrade path that exists from BW 3.5 to 7.3. Or the only option we have is to first upgrade to 7.x and then move onto 7.3?

Can you please share any document / Link / Upgrade Guide which talks about the pre-requisites and other requiste details for 3.5 top 7.3?

Thomas Zurek
Blog Post Author
November 16, 2010 at 3:57 am
Sunil, I've been told that these will be publically available only close to start of ramp-up.