Have you ever had this problem?  You need to analyze a bug, or you want to find out how an application works. And you don’t know where exactly to set a breakpoint. So you start the ABAP Debugger and start stepping through the code.

And you keep on stepping through the code, endlessly, without reaching any of the application logic in which you are interested. ABAP applications often make use of application frameworks or technical infrastructures like ESI, Web Dynpro, or ALV. Finding your way through this infrastructure coding in the debugger to your own application coding can be time-consuming and inefficient.

With NetWeaver 7.0 EHP2, which is delivered with Enhancement Package 5 of SAP ERP, ABAP brings you an elegant solution to the problem of reaching the code you want to debug:  layer-aware debugging.

You can define simple software layers either ad hoc, on the fly in the ABAP Debugger. Or you can define re-usable, more flexible layers as object sets in so-called SLAD profiles (Software Layer-Aware Debugging) in transaction SLAD.

You can vary software layers along these dimensions:

Here’s how you can use layer-aware debugging on the fly in the New ABAP Debugger. Our example is an ABAP Web Dynpro application. We want to skip all of the ABAP Web Dynpro code and jump right to the GRMG application code in package DSWP_MON_GRMG.

Here’s how to proceed:

Direct, ad hoc layer definitions in the debugger are convenient for a quick debugging session. But often you can save yourself time by defining re-usable layer-aware object sets and profiles in the SLAD-Cockpit, transaction SLAD (Software Layer-Aware Debugging).

Let’s say that it is your turn in support. With an SLAD profile, you do not need to enter a list of your packages in an ad-hoc software layer every time that you start the debugger. And only with an SLAD profile can you fine-tune the behavior of the debugger by referencing multiple object sets with differing visibility and debugger-behavior settings.

Here’s how to define object sets and profiles in transaction SLAD.

Notes: How to Find Out What to Include in a Software Layer

If you are really lucky, you know exactly where to set a breakpoint in order to debug a problem.  In this case, you don’t need layer-aware debugging. You can stop in the debugger exactly at the logic you want to see.

If you kind of lucky, then you are working with your own code or code that belongs to your project.   You probably know the packages and programs that contain your code.  And you can define a software layer consisting of these entities. This kind of positive list of interesting code is optimal; a software layer defined this way lets you jump right to your code and also lets you skip over infrastructure code that may be intermingled in your code.

But what do you do if you really don’t know the software that you are about to debug? How can you find out what to include in a software layer that you define for layer-aware debugging? Maybe you can ask someone who knows. Perhaps you are working on a problem involving a customer’s development – then you can ask about the packages and other components that the customer uses.

But if you really are unlucky and do not even have a contact person who knows the code, here are two good ways to find out what to include in a ‘visible’ software layer:

The information in these traces lets you assign trace entries to software components pretty easily. You can then define a software layer on the basis of package assignments or the objects in the traces themselves.  The traces may even show you exactly where to set a breakpoint.

Finding Packages with the SLAD Component to Development Package Mapping

If you know the component that you want to specify in a SLAD object set, then you can use the package select in the Object Set editor to find out which packages belong to the component.  Here’s how to do this: 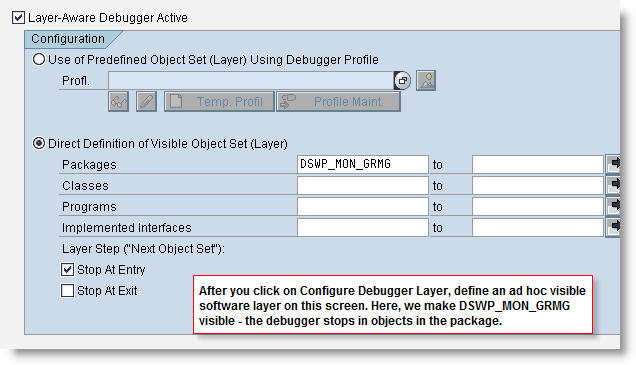 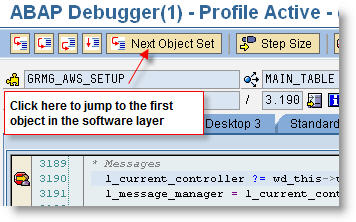 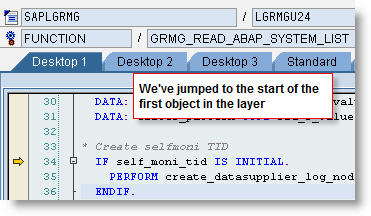 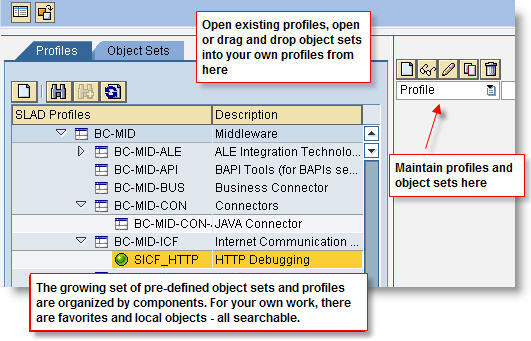 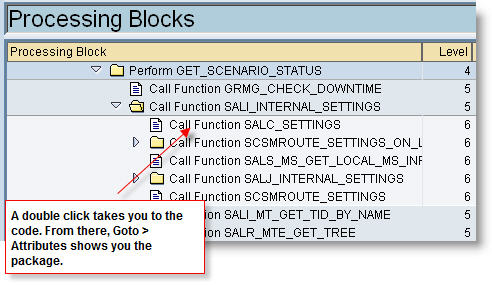 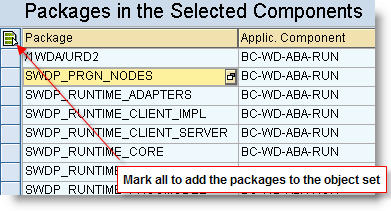 Former Member
July 28, 2010 at 1:36 am
I completely agree with Stephen.  This looks like wonderful functionality.  But it will take a while to get to my company.  Possibly a couple of years.

BUT I'll add this to my book of tricks for later.   I may actually remember that I have something on the "new" debugger. ("old" debugger to many other people.)

The nice programming features of EHP2 will come out with ERP5 - there is also a Mini-Basis planned as I understand for release in October. You might want to check in the service marketplace, whether a download is available.

Former Member
July 28, 2010 at 3:16 am
This is a really good blog entry with extremely valuable information. Thank you very much.

Satinder Singh
August 15, 2010 at 1:03 am
I was told that there is a better replace functionality in the new SLAD. You can defined the replace rules in the profile and then let the code execute. This becomes handy especially when you are debugging std SAP code and you want to bypass on sy-subrc condition.

Can you please add more details on that also ?

I think you may be thinking about debugger scripting, which also comes with EHP2 and which we also will be profiling. In a debugger script, you can automate anything that you can do in the debugger (and then some). You can, for example, have a script that automates the replacement of the SY-SUBRC just set in your debugger session. We don't currently have a way to trigger the automatic execution of a script on entry to or exit from a layer, but that is perhaps worth thinking about.

Look nice. But when I tried to use for for debugging with "package SRBAM*" or class "CL_RBAM*" is did never stop (tested in the ByDesign system AJP with the BO test shell SESFTS). Any ideas?

Wildcards are acceptable to SLAD. Did you use the Next Object Set button to continue debugging? The Continue function does not know about layers and skips right over layer boundaries.

Peter Dell
August 18, 2010 at 3:49 am
I was expecting it work work like breakpoints, it stops at the first condition, depending if layer aware debugging is enabled. But instead I have to enter the debugger screen with every roundtrip first, then I can press "Next Object Step" - then it works fine.