“Be the change that you want to see in the World!”

The blog title is very profound statement from a very profound activist, Mahatma Gandhi. It’s even more significant to me because I live in South Africa (which is where Gandhi spent many years of his activist life), Gandhi is of Indian heritage (much like myself) and he’s one of the many leaders (like Nelson Mandela) who fought tirelessly for the very freedoms I enjoy today in South Africa.

The 2010 FIFA World cup has graced South Africa’s shores and it left a legacy on a nation once dvivided in so many aspects. For a fleeting moment in time (a month to be precise) Africa united and you could feel the pulse of a continent destined for great things. The sceptics (particularly some sensationalist journalists) should really be putting out retractions (for adopting a ‘South Africa can’t do it’ stance & for depicting South Africa as the crime capital of the world) but that might be a bit too much humble pie all rolled up in one…As it turns out, South Africa delivered the World Cup with the greatest of pride & professionalism & the hundreds of thousands of fans that descended on the Southern tip of Africa regardless of baseless reports are much more wiser (and happier) for having done so. So what’s left behind? Loads of world class infrastructure, a very proud nation united, a philanthropic mentality, a wealth of energy to be harnessed, a very strong sense of belief, the ability to host any event the world has to offer and a real eye opener for foreign investors. Those are just some of the benefits but one of the biggest highlights for me was during the closing ceremony when the World was graced by the presence of Nelson Mandela. This is a man that spent 67 years of his life dedicated to social injustices & oppression of one by another & probably a key contributing factor as to why we were able to enjoy a World Cup on South African soil in our lifetime. 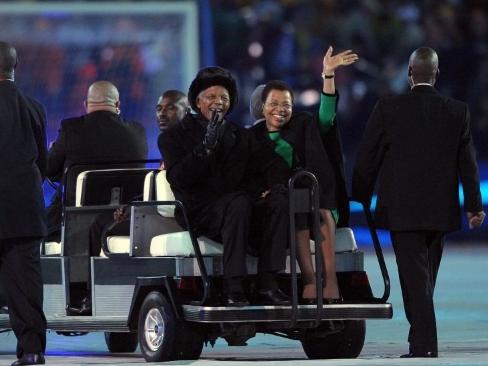 On Sunday (18th July 2010), people all over the world celebrated Nelson Mandela’s 92nd birthday. The way we celebrate it here in South Africa is by giving 67 minutes (for the 67 years that Nelson Mandela spent of his time so that South Africa can be free) of our time to some charitable course or organisation or just trying to make a difference by helping someone else or something else less fortunate than ourselves. People around the world are also starting to follow this tradition & I encourage everyone that reads this blog to try something similar in your very own community, a little goes a long way & just maybe, you could be helping a future world leader that could become a potential game changer like these leaders that I aspire towards. Which brings me to my next point…

The 1Goal initiative is still relatively new & began with the 2010 World Cup in South Africa. This is slowly picking up steam with hoardes of celebrities & soccer starts supporting the cause. You don’t have to part with any cash with this one, just add your name in support. There are some abitious targets with this initiative but I believe…

Former Member
July 21, 2010 at 12:54 am
Excellent blog Trevor, thanks for raising awareness

Former Member
July 21, 2010 at 4:18 am
Well done Trevor! Somebody who's aware of the BIG picture, that's showing beyond our desktop-bound (minute) problems..

Marilyn Pratt
July 27, 2010 at 12:14 pm
Working on Crisis Camp Haiti during the first quarter inspired me to think that our developer community can engage further in "change the world" activities via their skills and talents.  Have some evil plans that I am looking forward to sharing with you and others Trevor.  Thanks for always being a stand for these topics.