Count me in: Why I, too, believe in ASUG Influence Councils

I followed with interest the recent debate about the ASUG Influence model, which started with Why I believe in the power of ASUG Influence Councils Part 2 – The ASUG UI Influence Council about the User Interface Technology council which she is leading. Whether or not you agree with the changes requested by the council members, the fact is that, with clearly articulated goals and good leadership, Influence Councils can be an effective way for groups of customers to give SAP feedback on their solutions, and for SAP to adapt their solutions to better serve their customers, a win all around. Sure, it is not the only way, but it beats some of the alternatives.

Take, for example, this case. Maybe you were there, at SAP TechEd 2007 in Las Vegas, when attendees were given the opportunity to Ask the Executives a question. I did it on a lark, never really expecting my question to make the cut. But lo and behold, at the keynote session, there I was, up on the big screen, earnestly making my case. 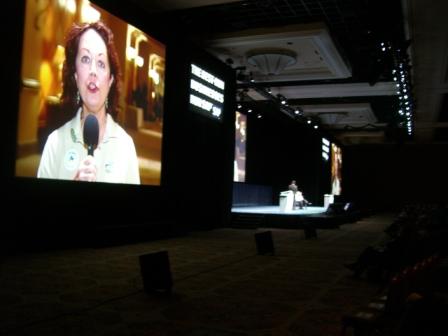 The gist of my question was, when is SAP going to do something about all the multitude of authorization concepts, a new concept being unveiled with every new SAP solution, which increases both the cost of providing 24/7 support and the risks associated with a security breakdown. I have to give SAP CTO Vishal Sikka credit; he acknowledged my concern and smoothly segued into a description of the benefits of SAP’s then-new Identity Management Solution. While he had good things to offer to security administrators for improving the tools for our work, that solution does not really address the issue.

Fast forward nearly three years, and we are all looking forward to SAP TechEd 2010. Numerous times over the past three years, my colleagues from the world of SAP security support have reminded me about that question and that concern, most recently my fellow SAP Mentor and ASUG volunteer friend, Tammy Powlas. Additionally I’ve seen it come up in roadmap presentations given by SAP personnel, where “harmonized authorization concept” is somewere off in the vague distant future. The thing is, without the strength of a group of customers uniting to express a concern and request changes in SAP solutions, I suspect that three more years from now, we may still be lamenting an unchanged situation.

Contrast that to the situation a few years back when a group of SAP customers banded together with concerns about the Central User Administration product. An ASUG Influence Council delivered change requirements to SAP, which eventually made their way into the solution. Even though CUA is being replaced by newer technologies, it was great to see the influence process deliver a sucessful result.

ASUG Influence Councils are a way for SAP customers to present a united voice in the future direction of SAP solutions. A new Security Influence Council is launching on July 21, with several SAP solutions  targeted for potential changes.  This council will have a working session at TechEd in Las Vegas. I’m not sure when the issue of the ever-expanding list of authorization concepts might come up for discussion, but I am confident that SAP product managers will take our eventual recommendations under consideration and give us a fair hearing.

Tammy Powlas
July 20, 2010 at 2:14 am
I have thought more about the lack of authorization harmonization and how it could impact the internal controls.  For example, to deploy a BW report on the portal, you need to look at BW analysis authorizations, portal UME, and if there's a drill back to ECC you have to consider those authorizations as well.  It is very complex!  Will the individual checking the segregation of duties understand everything all the jumps?

Good luck with your influence council!  I look forward to hearing about the progress.

Former Member
Blog Post Author
July 20, 2010 at 3:53 am
Tammy,
Yes indeed, segregation of duties rules for access in multiple SAP components, or SAP and third party solutions, can be exceptionally complex, and with all of these different authorization concepts, it is increasingly unlikely that any one member of the security team is expert in all of them. Depending on the complexity of your landscape and the number of security resources, it's possible that you're doing pretty well if you have a main point person and a backup up to speed. And when one of these more obscure authorizations breaks down after an OSS note goes to production over a holiday weekend, good luck to the poor sod who is on call.

As for this phase of the council, we have several solutions in scope, so our council has some exciting work ahead, and very likely a second phase will follow to pick up with additional solutions and concerns. I am confident that we will have some positive results to report once it's over.

Former Member
July 20, 2010 at 6:44 am
I know we are working hard on standing up the Influence program within the BusinessObjects suite.  Glad to know there is hope yet!

Another informative and interesting post. I mostly agree, but not entirely. Although the ASUG Influence Councils take feedback from a global audience they are still USA-centric - I wouldn't say that they are "a way for SAP customers to present a unified voice" because ASUG doesn't represent all SAP customers.
An example of this is that Karin published the full results of the ASUG UI Council report on the ASUG website - not publicly. Now I'm sure Karin would not have an issue sending me/anyone a copy of the report. What I want to point out is that ASUG is not as inclusive as you might believe.

That all said, I think Karin et al did a fantastic job, the value of their work is without question. SAP certainly pay plenty of notice to ASUG Influence Councils. My only wish is that the councils could somehow remove themselves from the tie in to ASUG and be more global.

Former Member
Blog Post Author
July 21, 2010 at 6:04 am
Chris,
Perhaps your confusion is due to a quirk of American English, but I am happy to elaborate. I unequivocally stand by my statement that ASUG Influence Councils are "a way for SAP customers to present a unified voice". I did not say that the customer group is worldwide or all-inclusive. It is a voice of a group of customers united in an endeavor of common interest. "Unified" and "comprehensive" are not synonyms in my American English thesaurus program; perhaps they are in yours, but thank you for the opportunity to clarify and I am sorry for the confusion.

Perhaps you are not aware that ASUG is a not for profit organization. Its community is not funded with corporate profits, licensing fees, consulting income, and other forms of income such as that of SAP and other for profit entities. ASUG does get support from SAP by way of SAP personnel working on ASUG initiatives, but ASUG is an independent organization, not a division of SAP. ASUG's continued existence is contingent on membership income and income from events such as the ASUG conferences.

Participation in Influence Councils is a benefit of ASUG Installation membership. If ASUG were to start giving away its benefits, the incentive for organizations to pay membership dues would be reduced, and its business model would be weakened.

It puzzles me why some people seem to think that ASUG should consider itself obligated to give away its membership benefits to non members, even though in one aspect it already does: all SAP customers can potentially benefit from the work that ASUG members do on Influence Councils. The solution enhancements and improvements that are the result of our long months of work are there for any SAP customers, so to non members, you're welcome in advance.

Thanks again for your comments,
Gretchen

Chris Paine
July 21, 2010 at 2:20 pm
Hi Gretchen,
Thanks - I was reading "a unified voice" for SAP Customers to mean a single all encompassing voice - which it seems was not the intent - which did lead to the confusion.

I didn't think that Karin published the _results_ of the influence council report to ASUG - including the responses to SAP (covered by the NDA) but just the results of the survey (of ASUG members and also non-ASUG member - and even taking feedback from SCN!). If, indeed, by being a member of ASUG you would have access to the replies from SAP, it would indeed be a powerful reason to join - for any organisation using SAP, not just those located in North America.

Which comes back to the point I was trying to make, probably very badly. This sort of influence, although very valuable for all of us (thank you, in retrospect 🙂 should be available globally and not restricted to just one (very powerful and very well organised SAP User Group community). Initiatives like the Certification 5 have also, I believe, been very well respected by SAP and the community and have raised the profile of the particular area that they were working in - but have published publicly.

I hope you can see my point - I'm not trying to play down the excellent work that the ASUG Influence Councils do, but I would wish for an alternative (more public) channel for a similar format for more global participation.

Thanks for you reply - it certainly cleared up a lot of the confusion I was having. Good luck with your forthcoming Influence Council - I am sure you will do all of us a huge favour by highlighting those problems you mentioned with SAP.

Since you are so interested in influence activities outside North America, I suggest that you survey your fellow members of SAUG (you *are* active in SAUG, I hope?) and get an influence program started, or a new council underway. As you may know, SAUG is a member of SUGEN, which coordinates activities among the member user groups, including influence.

So actually, there already *are* possibilities for influence opportunities outside North America. No, they are not open to all comers; it takes work and resources to keep an influence program going, and the saying "the best things in life are free" notwithstanding, an effective influence program takes tools, people, and organizational support, and again we come to the value proposition of user group membership.

Good luck! We will look forward to hearing about *your* influence activities.

Chris Paine
July 22, 2010 at 3:09 pm
Thank you Gretchen. I will investigate how SAUG could be involved more in these sorts of activities.  Working for a company which is both a customer of, and implementer of SAP solutions we/I have to carefully balance our involvement with user groups - we don't want to be seen to be involving ourselves purely to get further implementation work. Which I hope would be quite clear was not the case here - still we have to tread a finer line than if we were customer only.

Former Member
Blog Post Author
July 23, 2010 at 3:48 am
Chris,
It may be different with SAUG but at ASUG, when a member organization is both an SAP customer/installation and an SI or other Partner, participation in Influence is possible for personnel on the SAP user side of the house. So for those who are consultants, my suggestion is to find someone on the SAP support side of your organization who shares your interest.

Thanks for taking the time to post your questions. I hope that other readers have also learned from our dialogue and will consider taking the plunge into Influence!