This was one of the last sessions of the day at SAP Inside Track Newtown Square (#SAPITNSQ). Special thanks to Laure Cetin for re-recording this session.

In this session, Jeevan Ravindran, InfoElixir provided a “Broadcasting 101” overview, an advanced session, discussed ways around shortcomings, and discussed Security around broadcasting.

If you are not familiar with Information Broadcasting I highly recommend Eric Schemer’s e-learning session – click here.

Well, you want to ensure the right information gets to the right people at the right time.

My “Broadcast News” Story
I presented an Information Broadcasting session for ASUG almost 2 years ago.  My experience with it started in 2007, when where I worked at the time we had just gone live with BW.  Our users initially were not happy with the system as the data was not real time.  Then one Friday morning, shortly after go live, I went over to see them, I showed them how to do some simple broadcasts (for only 30 minutes!), and BAM (as Emeril says) they were scheduling broadcasts, doing adhoc broadcasts, all around the company and everywhere.  These broadcasts became a key part of the procurement processes.  I also used Broadcasting to alert myself for data loads from process chains.  Thanks to Information Broadcasting, our BW projects took off and made BW a huge success where I last worked.

Jeevan’s Session
That said, Jeevan takes Information Broadcasting to a whole new level and then some in this session.

With basic broadcasting “we” determine the recipients ahead of time by scheduling or ad hoc broadcasting.  We can set up exceptions, filters, and schedules.  Jeevan mentioned that broadcasting by exception is not available from workbooks.

He reviews the 4 scheduling options for broadcasts:

Option 1: Immediately after the data load

We can include an “event” in the process chain to only execute the broadcast after a successful data load – this is handy for checking data loads, in my opinion.  Jeevan says to use this sparingly as you could use up system resources by having the broadcasts run all at once.

Option 2: At a pre-determined time slot
You can also schedule broadcasts to run at predefined times using program RSRD_BROADCAST_FOR_TIMEPOINT and schedule the job with prefix TP_BROADCASTING_*

Option 3: You specify the date/time scheduling

Jeevan also reviews Broadcast Monitoring and Administration – confession time – I haven’t done, but probably should.  The transaction to do this RSRD_ADMIN you can get via RSA1.  This transaction can also be used to display broadcast schedules using program RSRD_ADMIN_REGISTRATION.  Transaction code RSRD_LOG allows you to display broadcast logs.  The webcast offers utility programs to clean up orphan schedules.  He also reviews how to set up workbook broadcasting setting up the precalculation server.

Jeevan also discusses Information Broadcasting security.  You may want to consider looking at the SCOT transaction so you only broadcast to those within your company’s e-mail domain.  Also, if you are not careful, you can broadcast under someone else’s ID/authorization – check S_RS_ADMWB.

I hope you can check out this valuable recording; Jeevan is also conducting an ASUG webcast on September 22nd.

Thanks again to Jeevan and Laure for a great session.  Because I couldn’t find any pictures of Jeevan at NSQ, here’s a picture of Laure, doing heroic work of moderating many sessions that day (photo courtesy of Craig Cmehil’s Flickr): 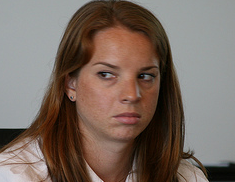 Former Member
July 19, 2010 at 6:02 am
Thank you very much for posting an expert review of my session, Tammy. I really appreciate it. It was a pleasure meeting you at SAP Inside Track event.

Laure Cetin
July 19, 2010 at 4:22 pm
Jeevan,
Thank you! I can say it was a good session, I heard it twice 😉 More seriously (though not as serious as on this picture above): participating in events such as the Inside Track NSQ, seeing the passion and dedication of our community members, this makes it a lot of much fun.
Thanks Tammy for highlighting this session and blogging about it.
Laure

This helps us to learn it more easily, Thanks