The article illustrated in this blog is featuring the SAP Mentors and SAP Mentor @mgillet. It is provided to illustrate the blog and is provided as a courtesy copy, under permission. The copyrights belong to their respective owners .

The views and opinions expressed here are mine and might not necessarily reflect SAP AG’s views.

Where it all began …

Long before I was appointed SAP Mentors in March 2009, I was already singing the praises of the Communities throughout many channels.

Throughout this blog post I wanted to share with you how, in my humble opinion, how we could use the local press to promote the SAP Communities and the SAP Mentors initiative locally. I have started doing the needful for my beautiful country : Belgium and by extension, Luxemburg (also known as the BELUX) and in this case extended to our friendly neighbors : France.

Use local event to promote SAP Communities and SAP Mentors

SAP World tour stopped in Brussels at the SAP Lounge, headquarters of SAPience (SAP Belgian User Group). Believe it or not but a SAP Ambassador and a SAP Mentor were onsite to share the passion and the ‘love’ regarding Communities involvments and much more…

There are only three (3!) SAP Ambassadors in the World (compared to the 90+ SAP Mentors), Les Hayman is one of them.

Who is Les Hayman ?

Les Hayman is SAP Ambassador within the office of the CEO. He is responsible for representing the interests of SAP’s board and those of SAP’s eco-system of customers and partners in government and industry think-tanks and other discussion and decision forums globally.

He is a particularly vocal supporter of initiatives to drive innovation in Europe so that European companies can compete on the global stage. He brings to bear SAP’s 30+ years’ experience in building and maintaining a global development network and corporate infrastructure to this debate, as well as his own personal experience of doing business throughout the globe, through his tenure as Chairman of SAP’s EMEA region and, prior to this, as President and CEO for SAP in the Asia-Pacific region. Les was appointed to the SAP Extended Board in 1999.

As Les was also Head of SAP Global Human Resources, from February 2003 to May 2005, responsible for all of SAP’s Human Resources activities worldwide; he is a very nice grasp of Human Capital Management issues at hand in these hectic times.

I was fortunate to meet already Les at SAP HR Conference held in 2008, in Amsterdam by Wispubs. As I was not appointed SAP Mentor at the time, I felt it was nice for us to meet once more after his keynote speach during the SAP World Tour stop in Brussels.

I was able to quickly brief him on the SAP Ambassadors ‘extended family’ (cousins ?) known as the SAP Mentors. 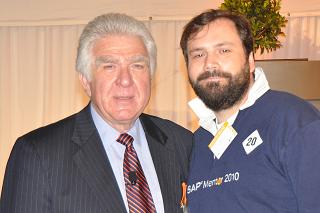 The full pictures feed from the event is available here.

Through a twitter follower, I made the acquaintance of the Associate Dean for research at the Rouen Business School. They are organizing workshops and debates tackling today’s challenges for companies. The workshop I was invited to was impact of Web2.0 and the Human Resources (in french ‘Réseaux Sociaux, Web 2.0 et GRH’). Indeed  in today’s business world, using new job description such as Community Manager and other tool is not a nice to have but an essential tool to be apprehended and usely wisely. This event was organized by ANVIE which is setting up on regular basis such ‘working workshops’ or ‘business get together’ in order to further investigate or discuss ‘hot topics and trends’.

They were keen to know more about SAP Communities as well as the SAP Mentors as SAP is clearly a leader in that field. Although outside of Belgium (indeed we do miss French SAP Mentors as well), I was invited to Paris for a 90’ presentation in their workshop.

Using my own SAP Mentor experience as well as the facts and figures from Mark Yolton. More facts can be found under Mark Yolton’s blog entry “Powered by YOU: SCN By The Numbers“.

Full document (in french, c’est la vie) can be viewed here (or click on thumbnail hereunder) 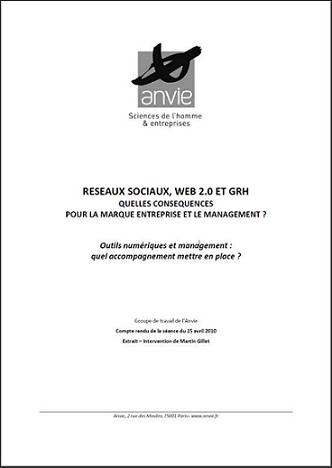 As we speak, in my humble opinion, it should be an undisputed fact that SAP is leading not only in the sotfware industry but also in the dynamic Communities set for collaboration around all business areas.

Continue the adventure by getting (free) access to SAP Communities.