Guidelines How to promote SAP Communities and SAP Mentors

“Guidelines How to promote SAP Communitie and SAP Mentors”

Disclaimer : All articles illustrated in this blog are featuring the SAP Mentors and SAP Mentor @mgillet. They are provided to illustrate the blog and are provided as a courtesy copy. The copyrights belong to their respective owners as mentionned in each chapter.

The views and opinions expressed here are mine and might not necessarily reflect SAP AG’s views.

Where it all began…

Long before I was appointed SAP Mentors in March 2009, I was already singing the praises of the Communities throughout many channels.

I did at the time started a document presenting the SAP Mentors in local language : French ! ‘Que sont les SAP Mentors’ ? which can be viewed through slideshare.

Purpose of this blog entry

Throughout this blog post I wanted to share with you how, in my humble opinion, some consolidated guidelines how to promote the SAP Communities and the SAP Mentors initiative locally. I have started doing the needful for my beautiful country : Belgium and by extension, the Luxemburg (also known as BELUX). I also ‘invaded’ France for a workshop requesting a french speaking for delivering the SAP Communities and SAP Mentors message.

For your convenience, I have wrap up the different actions in a quick ‘readable’ hand user ‘manual’. Indeed, I didn’t want this blog entry to be so called ‘overwhelming’. Each chapters is pointing to a more detailed blog entry, shall you be keen to have the full uncut story

Perhaps these achievements could serve as a ‘Howto Guide’ for other Mentors of Community geeks and enthusiasts to promote SAP Communities and SAP Mentors locally in your own country. I’m open minded, shall you have other ideas ‘Howto’ promote these, please do chime in and comment !

Well, I didn’t have any formal strategy, I was aiming at sharing as much as possible the information to my SAP Peers and colleagues, through whatever suitable channel I could use and/or reach out to.

Someone said once ‘In SAP world, it’s not so much about what you know about SAP Products, it’s who you know at SAP’. Well I trust same principle could be re-used in professional life. I have therefore used my own network in order to accomplish the following achievements described hereunder.

Executive summary for readers on the run

To begin with, shall you be in on the run, you can view my presentation “How to promote SAP Communities and the SAP Mentors initiative locally entert(r)ained at SAP Inside Track London” Last June 2010. It is a quick introduction/wrap up regarding the actions undertaken. 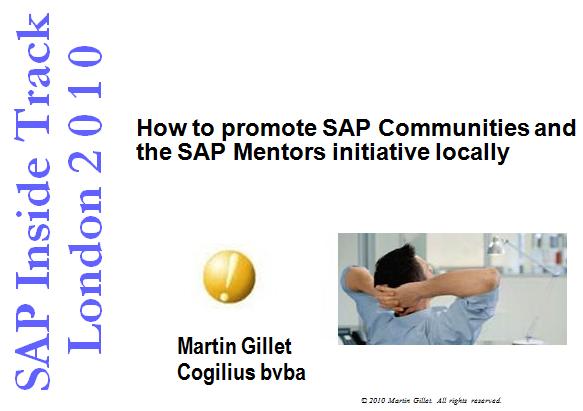 I have broadcast the key message throughout different press publications :

In this main french speaker newspaper ‘Le Soir’, I was fortunate through Linkedin to meet one of the journalist writing for the weekend publication (‘References‘) which features an Employment section as well as testimonies.

(According to statistics provided by external provider CIM, here are the newspaper coverage facts “Public results of Readership Survey 2008-2009, Copyright CIM” which has one of the widest coverage in Belgium.)

As I’m currently to only Belgian SAP Mentors, I used that fact to sneak into the main well known Belgian French speaking newspaper ‘Le Soir’. An article was published durint the weekend of December 5th-6th, 2009 , in the section ‘References’ topic ‘Enterprise 2.0’ (which is more or less equal to the Business section) over the weekend which means a larger potential audience.

I proudly introduced the SAP Mentors to all Belgian French speakers readers, quoting Mark Finnern and Craig Cmehil as illustrated in the two figures here under.

The full french speaking article can be viewed here.

It is always nice to be published in a general newspaper but in order to expand the maximum coverage, especially to ICT geeks and all users type of SAP, I also wanted to share the news through professional magazines, such as Datanews. I was fortunate to engage some talks and wild ideas with belgian journalist through networking.

Datanews publishes a weekly magazine, in which, I managed to get into the ‘Careers’ Page, promoting the SAP Communities and the SAP Mentors. For the record, as Belgium is mainly speaking French and Dutch , the cherry on the pie came from the publication being translated and published in French and Dutch !

This summer, it was a bit different as I got a request from a journalist writing for the RH Tribune. The RH tribune is a key leader in providing specialized information to Human Resources professionals here in Belgium, to the french and dutch speakers communities.

The journalist wanted to know ‘my’ experience and views on alternative learning tools such as the ‘Virtual Learning Classes’ (powered by Adobe Connect technology) held at SAP Education Centers.

To my knowledge, in Belgium, the VLC are not quite picking up (probably the olf ‘european fashion way’ compared to the US diving into new technologies channels) so I also introduced the public SAP Mentor Monday (and replays) which is using the Adobe Connect technology.

My views and comments were introduced in the July monthly edition, in their Alternative Learning subject. The interview was held in Dutch and the article was wrap up in Dutch as well.

Being a SAPMentor does opens some doors, especially at events like TechED, SAPPHIRE and SAP Inside Track. But once you returned from the promised community land, in your own country and although it might sounds silly at first I found SAP Belux to lack awaress . I it seems that most local SAP, although some individuals might be aware, are not familiar with the term SAP Communities and even less with SAP Mentors …

Having training skills in my skills set, I was keen to educate and share the good news with SAP BELUX, doing the needful as usual.

Now that hopefully most local SAP Belux colleagues have been duly briefed about SAP Communities and the SAP Mentors, why don’t we also add these news to the local SAP BELUX Website ?

I had the chance to have the Marketing Intelligence / Head Coordinator BeLux on my side as she was enthusiastic with the whole idea. It first started with a trainee that gathered the required information then Marketing Intelligence / Head Coordinator BeLux Manager took over and within a few days, all the new content was online !

> The full detailed uncut story ‘Make local SAP aware that Communities and SAP Mentors exist and do matter !‘ is here.

Channel 3 : SAP Inside Track : Get your local event popping up !

SAP Inside Tracks are important links between SAP peers and community members. These formal get together are a great way to share knowledge through sessions that attendees themselves submit to their peers. I’d say it is almost a must to host one at least once a year in your country if you want, ditto Mark Finnern, to ‘assemble your tribe’.

Ever since my first SAP Inside Track in London, I was kinda ‘jealous’ that my beautiful land didn’t have one scheduled in beautiful Brussels. Since 2010, SAP Inside Tracks have been popping up like spring flowers. I had already spotted a great facility powered by SAP Belux, known as SAP Lounge. It was just a matter of finding/taking the time to find in my network the right individuals at SAP to endorse and support such an event. It took me a little over a year to gather all information and meet the right persons in order to get them convinced of such a great event.

In June 2010, SAP Inside Track Brussels (hashtag #sitbru) was on track and scheduled for Friday September 10th 2010 !

Call for speakers is still open : Register your session here .

Attendees are welcome to join us and can register using this form.

SAP World tour stopped in Brussels at the SAP Lounge, headquarters of SAPience (SAP Belgian User Group). Believe it or not but a SAP Ambassador and a SAP Mentor were onsite to share the passion and the ‘love’ regarding Communities involvments and much more…

There are only three (3!) SAP Ambassadors in the World (compared to the 90+ SAP Mentors), Les Hayman is one of them.

Through a twitter follower, I made the acquaintance of the Associate Dean for research at the Rouen Business School. They are organizing workshops and debates tackling today’s challenges for companies. The workshop I was invited to was impact of Web2.0 and the Human Resources (in french ‘Réseaux Sociaux, Web 2.0 et GRH’). Indeed  in today’s business world, using new job description such as Community Manager and other tool is not a nice to have but an essential tool to be apprehended and usely wisely. This event was organized by ANVIE which is setting up on regular basis such ‘working workshops’ or ‘business get together’ in order to further investigate or discuss ‘hot topics and trends’.

They were keen to know more about SAP Communities as well as the SAP Mentors as SAP is clearly a leader in that field. Although outside of Belgium (indeed we do miss French SAP Mentors as well), I was invited to Paris for a 90’ presentation in their workshop.

Using my own SAP Mentor experience as well as the facts and figures from Mark Yolton. More facts can be found under Mark Yolton’s blog entry “Powered by YOU: SCN By The Numbers“.

Well ‘pictures are worth a thousand word’. Like other users I follow on twitter, I managed to received a decent camera and got the photograph addiction.

I shot lots of SAP Communities and SAP Mentors whereabouts, at TechEd Phoenix and Vienna last year in 2009; in 2010 : at SAPPHIRE this year in Orlando (so far over 1275 views), SAP World Tour’s pit stop in Belgium (so far over 300 views) or during SAP Inside Track Bonn (so far no views as merged from FB 🙂 ) and SAP Inside Track London (so far over 340 views) etc and counting !

I trust this visual communication channel also speak for themselves and are giving a positive feedback to the Communities members and other people not yet involved with them.

Well, throughout these examples, I have shown that it is not impossible, throughout networking or personal requests, to reach the right individuals and share the message regarding SAP Communities and SAP Mentors.

I hope this will lead to sequels but also it will inspire other people amongst the Communities ‘geeks’ and fans, to promote our Communities and the SAP Mentors amongst their local user groups, audiences and communities as well.

Who’s next for taking up the challenge ?

My five cents to this great ongoing adventure.

Former Member
July 15, 2010 at 8:29 am
This WIKI SAP Community my way should help promote SCN - at least internally.  I think I'll give the link via e-mail to people as well.  It's great to watch these presentations.  (And they have some great ideas.)

Nice blog - I was wondering how to get more people here.  I just tend to tell them about it, and the advantages.