Mapping our scenario to CORA

The following picture shows the mapping of our ROA application onto  the CORA model. 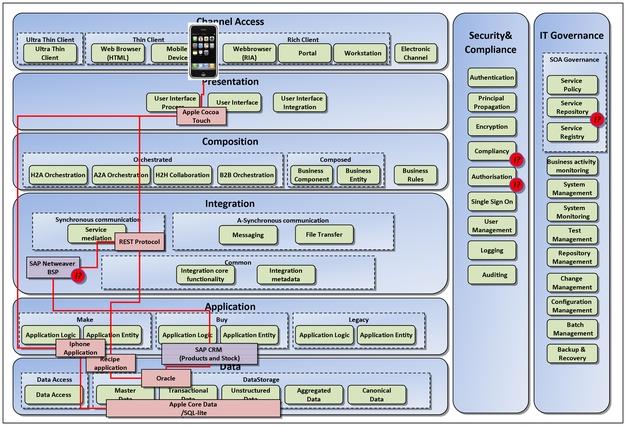 The App is the core of our scenario, as it is the part our  end-user sees and interacts with. The App will run on the Apple iPhone  device and utilizes the Apple Cocoa Touch and Apple Core Data frameworks  for its UI and Data layer. The only data that is stored on the device  is a user profile containing allergy information for that particular  user: the user can tell the App what substances or products he is  allergic to.

All other information is available through the REST protocol. The App  communicates with two separate resources: a system delivering recipes  and allergy information and a SAP CRM system that supplies information  on products and stocks. In comparison to the user allergy profile (which  is very suitable to store on the users device) the amount of these  types of data is usually large and will change more often. They are  therefore stored as server based resources.

The Question mark boxes show problem areas or areas that needed more  investigation. Some important ones are:

After we performed the mapping we discovered some new things about  our scenario we hadn’t noticed before creating the CORA mapping:

Benefits from the CORA model

It was because of performing the mapping to the CORA model that we  realized we wouldn’t get rich. Besides this it provided us with great  insight and it was therefore a great benefit to use this model. In more  general terms, the advantages are:

Our first next step is to finalize to a 1.0 version of the App, even  though probably it can never be released for commercial purposes for the  reasons outlined in the Findings section.  We want to do this because  the App will still be very useful as a demo instrument, showing  possibilities and illustrating our lessons learned. And besides, we  still think the idea is brilliant and deserves to be developed!

For the 2.0 version an interesting decision pops up. With the  intention to obtain the recipes from a generic service (i.e. as a  resource) we need to decide where to do the translation from the  ingredients stated in the recipe into actual products.  We can do this  in SAP or in the iPhone or possibly entirely somewhere else.

The CORA model actually does not provide direct guidelines on where  to implement business logic: it describes where it can exist, but  does not explicitly state where it should be placed.  It would  actually be a great addition to CORA if it would also help guide  functional decisions. Perhaps in CORA 2.0?

Ir. Wilco Menge is working  at Capgemini as an SAP software developer and technologist  extraordinaire.