This blog is a co-operation with my colleague Jan Kritter from the DB6 performance team. This time we will explain the difference between an explain plan with parameter markers and values. Furthermore an outlook on the test execution will be shown.

You may want to read these two overview blogs first:

Whether the data distribution statistics for a table are in place or not can be checked with this SQL statement (to be executed in ST04 – Diagnostics – SQL Command Line or from the DB2 command line):

If you get a result set, you have data distribution statistics.

Let’s take the table DD02L as an example. The DD02L table stores all SAP tables. We have a field called AS4LOCAL which holds the activation status for each table. In my system the distribution is as follows (for this result I create a table in SE11 but did not activate it):

Only 1 entry has status ‘N’ (entry edited, but not activated) all other are ‘A’ (entry activated or generated in this form). With data distribution statistics the DB6 optimizer is aware of this data skew.

We trace and analyze the execution with ST05. 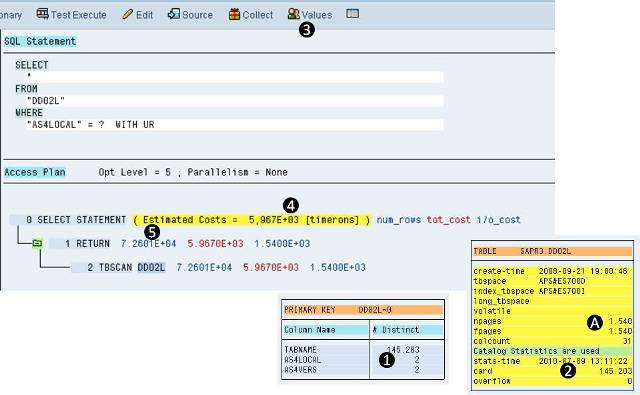 In the execution plan we can see that the estimated cost is 5967 (bullet 4 in figure 1) and the estimated rows is 72601 (bullet 5 in figure 1). Furthermore a full table scan (TBSCAN) is executed to run this query.

In the statement text you can see that the where condition is:

This is the parameter marker that is used by the optimizer to come up with the execution plan (access plan). Although the data distribution is known the optimizer expects 72601 rows as a result set since it is NOT aware WHICH of the two existing values (see bullet 1 in figure 1) A or N are used for the execution because the parameter marker (“?”) is used to build a plan as is typically the case for dynamic statements.

Now let’s click on the “Values” button (bullet 3 in figure 1) to see the estimated plan if we give the additional information regarding the data distribution to the optimizer.

Now the optimizer has all the information needed to come up with a better plan.

Instead of a full table scan (TBSCAN) we get an index range scan (IXSCAN with 0 columns). Although we don’t have an index that starts with the column AS4LOCAL the optimizer decides to do use index DD02L~1 which has AS4LOCAL in the second position. This is done because the index has less pages (nleaf 88, see bullet 7 in figure 2) than the table (npages = 1540; see bullet A in figure 1). This means less I/O with the IXSCAN.

Test execution on the database

Now let’s compare the effects. In order to let the database know the values we have to use the “SUBSTITUTE LITERALS” hint.

In order to compare them we change our program to:

As always with hints, only use them if there is no other chance of tuning the SQL statement and verify well that they do not have undesired side effects.

We execute it before we trace it (this is done to fill all the caches). The second execution is then traced in an SQL trace: 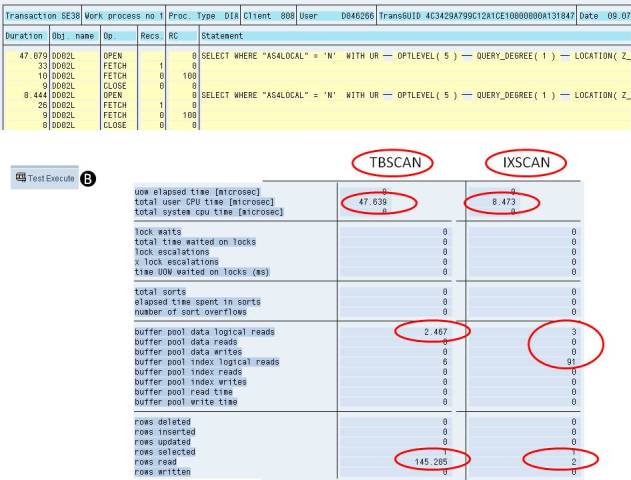 The first execution takes 47 milliseconds (using a TBSCAN) when the data is cached.

The second execution takes 8 milliseconds (using an IXSCAN) when the data is cached.

With the “Value” button in DB6 you can quickly check if a better execution plan is used if the optimizer had more information as values instead of parameter markers often reveal that the optimizer decides on a suboptimal access plan because of data skew. The results that are achieved are sometimes much better if we provide this additional information to the optimizer.