What Makes It Tick?

I’m not sure why you would ever want to, or if the thought ever crossed your mind before, but being insatiably curious about technology I support, I was moved to pull apart the infamous BIAR file and find out what makes it tick. I was the kind of kid that would take things apart to see how they worked and then try to put them back together again. Many clock radios, boom boxes, and vacuum cleaners met their doom at my young hands.

What is a BIAR file?

I guess I should start by explaining what a BIAR file is. The acronym stands for Business Intelligence ARchive, and is basically a proprietary zip file used to move Business Intelligence content from one BusinessObjects Enterprise Server to another. If you talk to our SAP BOBJ friends in Vancouver, they pronounce this as a “BEER” file. I find it hard to argue with that notion, being a big fan of the golden sudsy goodness myself, but down here in these parts we prounounce it “BYAR” like the IRE that it raises from time to time. We are told that this file is only readable by the Import Wizard. But it was the Import Wizard’s inability to read a BIAR file once that activated my youthful desire to pull it apart and figure out the puzzle.

What exactly is the problem here?

I had a BIAR file with about 50 reports and 11 universes with the associated groups and security that was ready to move from Development to QA testing. I opened the Import Wizard, selected the BIAR file, and when I went to open it up to select what content to deploy, it appeared empty. But the BIAR file had a size greater than zero bytes on my disk (it was a couple of megabytes) so I knew it wasn’t really empty. Refusing to accept the fact that it was “just corrupt” I decided to try and dive in and see what was going on. Let me caution the reader here that this is not supported by SAP, and I do not recommend making any changes to the BIAR file in any way. Doing so will corrupt it and render it useless. (Yes, I tried).

Get out the Hammer and Screwdriver

I found that an archive tool is able to read the BIAR file and show you what it contains. You have to right-click on the BIAR file and select “Open With…” and pick your archiver tool. I used WinRAR, which is my personal favorite.

I opened up the BIAR file and here is what I found: 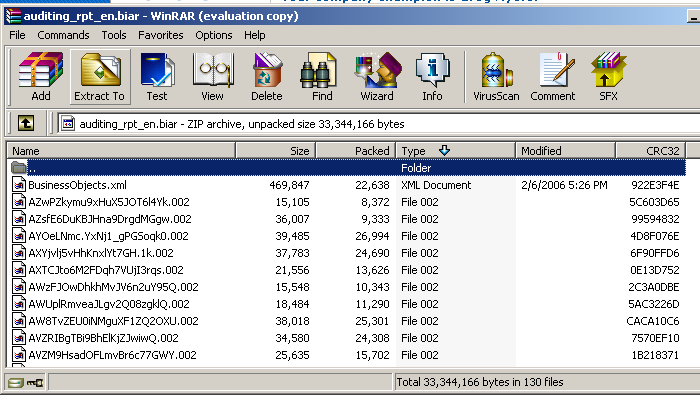 You’ll notice that the first file is BusinessObjects.xml followed by a bunch of files that have gobbeltygook names and file extensions.

The XML file is the manifest for this BIAR file, and you can open it and see what the contents are supposed to be. It looks like this:

Basically the top few lines declare the types of objects that are contained in this archive (Webi, Crystal, Universes, Connections, etc.) and further down it declares each object that is in the BIAR file and which one of those gobbeltygook binary files contains the actual object for the Import Wizard to go and get.

Putting it back together

And that’s really it. It’s not as mysterious once you pull the top off and look inside.

Now I’m sure you’re wondering what became of my “empty” BIAR file. Thankfully, that is a simple answer, despite the fact it took several hours and pulling apart several other BIAR files to compare it with. I had created the BIAR file over WiFi and over the VPN. I finally found that my empty BIAR file was all gobbeltygook and no manifest. So the Import Wizard had no idea how to read all of that binary content, which was making up the disk mass. Apparently I was the victim of some packet loss. Now as a result, I always try to make and deploy my BIAR files while in the office connected directly to the LAN, or from a server in the Data Center using Remote Desktop.

And that’s it for this round. I hope you enjoyed being destructive!

Marilyn Pratt
June 23, 2010 at 3:46 pm
Although not at all familiar with BIAR files, for a BOBJ newbie like myself this made clear good reading.
Glad you took the blogging challenge and decided to share here.
Thanks!

Former Member
June 24, 2010 at 3:04 am
I may have to go pull apart a couple of BIAR files and check this out.  I'm curious about what information is in the XML.

Oh, and we pronounce it BEER (as in free) here.  I don't think I've ever heard the BYAR pronunciation.  I have spoken to a number of people who had trouble figuring out that I meant BIAR when I said BEER, though.

Former Member
June 24, 2010 at 12:02 pm
Good Job Greg! I have played with the BIAR file myself and found it pretty cool that at least you can go in to the XML file and check if your important objects made it in.

I would say though that the BIAR file is not the most reliable ways of migration stuff...sadly still! I am hoping that XI 3.x has made it better!