In our previous blogs, we have covered the following topics:

A business combination is defined as a transaction in which an acquirer obtains control of an acquiree. In other words, IFRS 3 only addresses first consolidation of a subsidiary. However, principles prescribed by IAS 28 for the first consolidation of an associate are similar. The acquisition of a joint control in a joint-venture is not explicitly addressed by IFRS. Groups usually apply the same principles as those for subsidiaries.

According to IFRS 3, each business combination should be accounted for using the acquisition method (sometimes referred to as purchase accounting).

First consolidation of an entity

The acquirer should recognize, separately from goodwill, the identifiable assets acquired and the liabilities assumed and measure them at their acquisition-date fair values. It may result in recognizing some assets and liabilities that the acquiree had not previously recognized in its financial statements (for example, intangible assets such as brand name or customer relationship). These acquisition-date fair values become the initial carrying values of the acquired assets and liabilities in the consolidated financial statements.

When NCI are measured at fair value, the difference between this amount and their proportionate share of the identifiable net assets is recognized as goodwill (see below).

Goodwill or gain from a bargain purchase

According to IFRS 3 revised, goodwill or gain from a bargain purchase is calculated as follows: 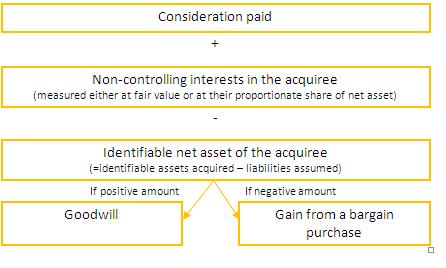 In the starter kit, goodwill and gain from a bargain purchase are booked automatically in the consolidated balance sheet based on declarations made by manual journal entries. These entries are posted on dedicated technical accounts (XA1310 for goodwill, XA1300 for bargain purchase), with a breakdown per share used to identify the owner company. This breakdown by share is also used to identify the amount of goodwill related to NCI if the fair value method is chosen.

According to IFRS 3, this operation is similarly treated as if the interest in the associate was disposed of and a controlling interest in a subsidiary was acquired.

Therefore, the different stages are the following:

In the starter kit, a change from equity method to full consolidation is handled as follows:

Any goodwill existing at opening (and included in the carrying amount of the investment in associate) is not reloaded on the new method flow. Indeed, it is part of the carrying amount of the previously held interest and is, therefore, taken into account to calculate the profit on “disposal”. A new goodwill has to be calculated as part of the acquisition method process and declared by a manual journal entry using the new method flow.

Accumulated OCI at opening is automatically reclassified to retained earnings on the new method flow, as for incoming entities. Reclassification adjustments displayed in the comprehensive income take into account the old method flow because change in consolidation method is handled as if the associate was disposed of.

Manual journal entries are necessary to:

Same as above for an associate becoming a subsidiary.

This operation should be similarly treated as if the interest in the joint-venture was disposed of and a controlling interest in a subsidiary was acquired.

This blog was the last one of the series. For more information about how IFRS (including standards that are not addressed in this series of blogs) have been taken into account in SAP BusinessObjects Financial Consolidation, starter kit for IFRS, a comprehensive paper is now available here.