A few weeks ago my management staff had the pleasure of visiting Altimeter Group‘s R “Ray” Wang and Jeremiah Owyang at “the Hangar” for a briefing on SAP EcoHub and SAP Community Network. As always, it was great talking with these guys about our ecosystem strategy and as an added bonus, we each received advance copies of Altimeter founder Charlene Li‘s new book, “Open Leadership: How Social Technology Can Transform the Way You Lead,” a follow up to her best-selling “Groundswell.”

“Leadership takes on a different dimension in a connected, networked world – that of being a catalyst
for change both outside and inside the organization.”

As social technologies transform the business landscape, consumers and even employees are urging executive leadership to be more open – open-minded about new business practices, open and honest communication to employees, open and direct communication with the public, open to new innovations, open to risk-taking and failure…It’s a difficult shift to make both culturally and personally, and this book is aimed at helping leaders assess their readiness to develop an “open strategy” that works for them and their organizations. Charlene defines “Open Leadership” as: having the confidence and humility to give up the need to be in control while inspiring commitment from people to accomplish goals.

Now, there still need to be controls to prevent total chaos – at SAP, we think of this as “orchestration.” So how does an open organization balance that openness with the necessary discipline to achieve its goals? Or as Charlene puts it, how can you be open while still running a tight ship? Well, last year, she had the opportunity to stay aboard a US Navy aircraft carrier, the USS Nimitz, through the same program that invited me and other social media enthusiasts aboard the USS Lincoln. The fact that the US Navy – charged with protecting and defending the United States and its allies – would open its doors to bloggers and other influencers, and encourage us to talk to anyone to get their unfiltered perspective is pretty extraordinary. 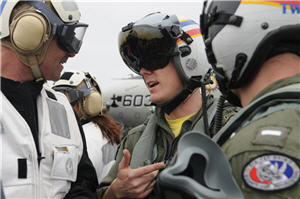 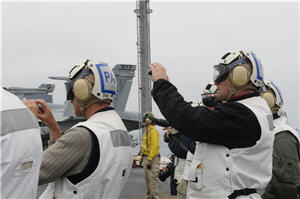 Yet each sailor undergoes intense training, so the commanding officers have confidence that they know what they can and can’t discuss with visitors. Additionally, their commitment to the Navy’s purpose, combined with the direct correlation between their role and this mission, provides guardrails to the open environment – or, as Charlene prefers, establishes a “covenant” between the sailors and their leaders. As such, the leaders are comfortable giving up an element of control.

“The reason to get proactive about giving up control is that by doing so you can actually regain some semblance of control. It seems counterintuitive, but the act of engaging people, of accepting that they have power, can actually put you in a position to counter negative behavior. In fact, it’s the only real chance you have of being able to influence the outcome.”

The chain of command is changing

Traditional executives have a tendency to view social media with skepticism, either as simply a fad or as a potential threat. But we’re learning that you can’t just ignore it – it’s part of the changing dynamics in the business world, helping accelerate the push for organizations to be more open and engaging with their ecosystems (if you have a few minutes, check out the refreshed Socialnomics video with powerful stats).

“Two things have happened to put pressure on [the traditional clear chain of command] mode. First, the parameters of success have changed from process control to innovation. You can’t simply “Six Sigma” your way into new markets. Instead, organizations need to develop the organizational flexibility to adapt to fast-changing markets. Second, businesses are now more likely to be delivering services than manufacturing objects. A skilled and motivated workforce on the front lines quickly chafes under strict limitations and hierarchies, unable to do what they think is needed because of headquarters’ disconnected notions of what really works in the market.”

At SAP, we’re fortunate to have the trusted SCN community, our SAP Mentors, and platforms like Idea Place and Code Exchange where you – our community members – help us identify market changes and test what really works. And if we can’t move fast enough or are not able to step in, our ecosystem is able to fill the gaps with custom extensions and solutions to fill specific needs. Now, extending this culture of openness and evangelizing the benefits to the rest of the global company is a significant culture shift (both historic corporate culture as well as country-specific cultural instincts). My colleague Jonathan Becher, EVP in SAP’s marketing organization, recently wrote a blog post about changing the culture in his new group by giving up control. Though his “open strategy” was on a small, internally restricted scale, it still reflects the four underlying objectives Charlene lays out: Learn, Dialog, Support, Innovate. Jonathan was open to learning about dynamics and working styles of his group, opened up dialogues empowering his direct reports, and publicly supported their decisions. This created healthy and productive working relationships, laying the groundwork to foster creativity and innovative approaches.

The ROI of being open

Moving toward an open and transparent model is a risk, with the potential of some very public failures along the way.  Charlene spends an entire chapter devoted to “the failure imperative.” An important part of being an open leader and cultivating an open environmentis being comfortable with taking responsible risks, and supportive if those risks don’t pay off. Most importantly, use failures as an opportunity to strengthen relationships and build a culture of trust that encourages risk-taking – build in worst-case scenarios, and if the risk doesn’t pay off, be sure that your post-mortem includes what you’ve learned to do the next time.

It’s harder for more established organizations like SAP, and individual employees, to become comfortable taking risks, unlike most Silicon Valley startups which are based on risks. (Charlene references Google’s motto of “fail fast, fail smart” – an attitude which is critical to nurturing its innovative culture… and a favorite in my own team is: “fail forward faster.”)  SAP took a big leap of faith back in 2003 in deciding to create SAP Developer Network (SDN), then committing to support it and build it out over the next few years to what is now a collection of communities, or SAP Community Network (SCN). The ROI of this open community, and later integrating multiple Web 2.0 and social media tools, might not have been immediately apparent, but Charlene lays out four clear benefits of open-driven objectives:

Simply by creating SDN, we committed to having an open strategy seven years ago. As a company, we’ve certainly experienced each one of these benefits, and we know that our individual members, our customers, partners, and others in the ecosystem have Building Community: Demonstrating Benefits & ROI, both tangible and intangible.

No matter your role in your organization, I recommend picking up a copy of “Open Leadership” and seeing how you can effect change and transform your company as a collaborative and inspired leader.

Former Member
May 30, 2010 at 11:20 am
Great post, great insight, I'm convinced that this open leadership takes your community, as usual, one step ahead. Really looking forward to see this OPEN philosophy changing the LEADERSHIP paradigm across all organizations.