ASUG/SAPPHIRENOW – the swell is building

Up bright and early on Monday, May 17.  The Calendar looks like this: 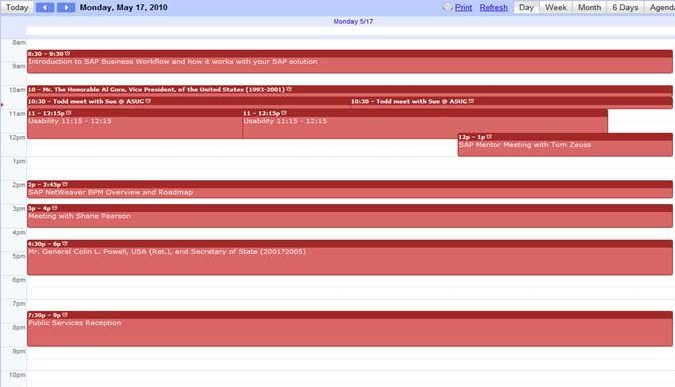 First up, Ginger Gatling delivered her usual outstanding performance to a packed room at 8:30 – SAPBusiness Workflow and how it will work for you.  Ginger brings so much energy to her presentations – nobody is *ever* bored.  Plus, the presentation material was so relevant.  People – about 150 of them – want to know ‘if/when/how should I use SAP Workflow to improve my processes’.  Ginger always delivers.  If you missed her presentation, ASUG members can download from the ASUG web site. But here is one informative slide… 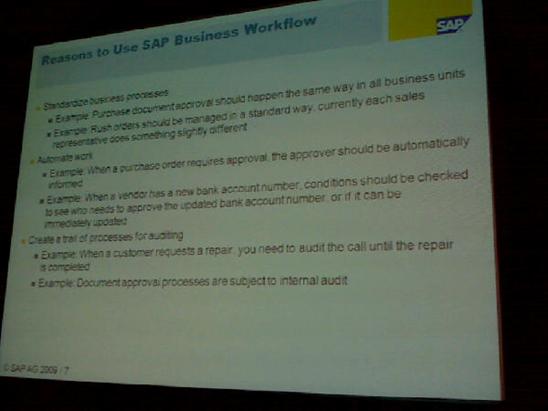 Next up, Keynote speakers Richard Branson and the Honorable Al Gore.  They were both very inspiring – is vastly different ways.

You can see their speeches here.  One thing I will add, on a personal note.  It has often been said (here in the United States) that Al Gore is a boring speaker.  This could not be further from the truth.  He totally owned that room.

Next up, I trucked on off to a Usability Session.  This is a customer’s unique opportunity to provide feedback to SAP on a variety of topics.  In my case, the topic was SAP.COM.  I must admit, having been working with SAP for so long, I don’t need to go to SAP.COM very often.  Still, I found this to be an enlightening hour – putting on my N00b glasses to see how the site would look to someone else.

Other end of the convention center – SAPMentor Meeting with Tom Zeuss.  Arrived a wee bit late and also hungry.  But I was intrigued enough to stay, and then find lunch after that.

One regret on Monday is that I did not get to Michael Hill’s session on the Roadmap for BPM.  If anyone was there, perhaps you will share your impressions?  Michael is a great guy – very very smart – and he’s just all about BPM, so I would be interested to hear your thoughts.

Meanwhile, Peter McNulty had come thru for me BIG TIME, finagling a meeting with Shane Pearson on the first day of Sapphire!  Go, Peter, Go!  He came, accompanied by Ginger Gatling and Dominicus Van Asten of Coca-Cola.  Coca-Cola is a huge SAP implementation (you can imagine) and also, a huge user of SAP Workflow.  Our goal was to meet with Shane, and show him some facts about our community – and get some feedback on how to proceed with establishing point-of-contact with SAP again, and to make use of the Workflow Survey.

This meeting showed the power of SAP’s commitment to the ASUG groups.  I am certain it would not have happened otherwise.  Shane is new to the job, although he had worked for SAP a few (cough) years ago.  He was pleasantly surprised to find that the SAP Business Workflow community is alive and going strong.  We’ll be following up soon, I hope.

Next up, another Key Note – this time with Bridgette Chambers and Anthony Bosco of ASUG.  Bridgette has joined ASUG  last year – after ASUG has admittedly had some serious growing pains.  She totally understands what ASUG volunteers always strive for – to bring the voice of the customer to bear – and seems committed to helping us achieve this goal.

General Colin Powell spoke next.  For whatever reason, I can’t locate the recording of his keynote.  Maybe someone can help me locate it?

The Vendor Floor was open and ready for business!  This meant the beverages were flowing and the appetizers were tasty.  Many people – who still had energy – were talking seriously with SAP Partners.  Others were wandering about, or just relaxing and sharing some thoughts on the day.

Finally, I headed to the Peabody for the Public Services reception.  I really wanted to catch up with some other public sector friends.  Soon though, I began to tire, and really just wanted some peace and quiet.  Headed back to my room and called it a day.

All in all, my most impressive moments were (not in any particular order):

1) The crowd of people who showed up at 8:30 to learn about SAP Workflow from Ginger Gatling,

3) The meeting with Shane Pearson – and with such strong supporters as Peter McNulty, Ginger Gatling, and Dominicus Van Asten.

Oh, that big wave I talked about earlier?  We are surfing it – it’s huge, it’s ASUG, it’s SAPPHIRE NOW, and it’s fun!

Laure Cetin
May 24, 2010 at 4:26 pm
Hi Sue,
I attended Ginger's presentation at 8:30 (hehe) and saw you and your energy, but right after the session finished you were already busy talking with some members of the audience. You're popular 😉 I thought I would see you another time, how wrong was I! Sorry I missed you at Sapphire, I would have loved to get to know you in person. Well, that will be another time.
As for Colin Powell's keynote, it was not recorded and therefore it is not available for replay 🙁
Cheers,
Laure

Susan Keohan
Blog Post Author
May 24, 2010 at 5:25 pm
Hi Laure,
So glad to hear you were at Ginger's presentation - she really rocks.  We will  have to plan to meet up sometime soon... perhaps in October?

Thanks for the kind words,
Sue