In Search of a Methodology for Social BPM

Social BPM: Definitions and Dissensions is the current rage amongst BPM vendors – many of which are promoting platforms – usually cloud-based – in which increased participation in process design using WEB 2.0 technology is the main goal.

For process improvement projects using more traditional technologies, there are a variety of methodologies available including the latest incarnation of SAP’s AcceleratedSAP (ASAP) Methodology and Business Add-Ons which now includes BPM. For Social BPM, however, the relative newness of technology and its different collaborative style begs the question: Is the use of existing process methodologies appropriate? Or are new methodologies necessary?  Is a structured methodology for such environments even desirable or is it indeed counterproductive?

Note:In this blog, I’m using a relatively broad definition of “methodology” to include not only project structure (lifecycle, steps, etc.) but also the tools necessary to perform a particular type of project.

In Web 2.0 environments / tools, the collaborative style is more often informal.  The use of a wiki, for example, is usually chaotic – users can add content (new pages, links, etc.) as they wish – wherever they wish. Such interactions, however, are isolated incidents without a real structure – there might not even been a common goal for their collaboration. A process improvement project – regardless of what technology is involved – has the implicit goal of improving a process.   This goal leads to the selection of particular types of tools to support participants.

Usually, a central component of Social BPM environments is a process modeling capability.  The modeling functionality in these environments is simplistic in order to allow the participation of individuals who might not have the ability / experience to use more advanced modeling tools.   SAP’s Gravity – Collaborative Business Process Modelling within Google Wave  is one modeling tool that demonstrates this more collaborative style and currently runs in StreamWork and GoogleWave.

There are a variety of questions regarding the usage of such modeling tools in collaborative environments- the most important being: “where do they fit into the project lifecycle? Do you just start modeling the process –  do you start from scratch?”  If you watch the initial Gravity video from GoogleWave, users start modeling after exchanging a few messages in a wave. This behavior might not always be the ideal choice.  Such activities are similar to those of developers who want to start coding immediately when they get an assignment – regardless of whether there is a design specification or not. There is that easy gratification after compiling that initial code and seeing that newly produced code manifested into a “living” creation – maybe it doesn’t work correctly but it runs. With the use of process modeling tools in Social BPM environments, you often find a similar problem.

Based on the assumption that other types of tools are probably useful in Social BPM projects, what sorts of tools may be helpful?

The importance of textual process descriptions

One such tool may be the simple textual description of the process, the steps necessary and the roles involved.   Before an agreement on such fundamental issues exists, further process collaboration is usually counterproductive.  Participants may assume that they are talking about the same roles involved in a process when they actually are referring to slightly different incantations of the same role. Of course, such differences may be discovered during modeling but at that point, there are so many other distractions in the process model that the ability to quickly identify such differences is no longer an easy task.

Thus, it is often useful to first start with a textual description of the process before moving to a model.  That way a fundamental agreement is present before advancing to further steps in a project.

Once this textual description exists, the next step is often the creation of the process model. This transition of text to model, however, may be time-consuming and may lead to discrepancies.

What if this textual description could automatically generate process models?

That is exactly what RavenCloud does.

I heard about RavenCloud via a blog by fellow SAP Mentor and analyst Sandy Kemsley and was immediately fascinated by it.

Based upon Ravenflow’s patented natural language engine, RAVEN Cloud analyzes a written description of a business process and identifies the participants in the process, the functions they perform, and the objects they handle.  It also highlights any logical errors or gaps in the process, so the user can immediately see where things need to be adjusted.  Once those issues are corrected, RAVEN Cloud automatically converts the text to a process diagram users can have emailed to them.

With RavenCloud, participants can quickly transform those textual descriptions into process models.  Ideally, these descriptions would be created via wikis.

This tool would be ideal in Social BPM projects where the AS-IS project description already exists in textual form. With RavenCloud, users could take this textual description and quickly generate a process diagram.  The generated model could then be used in further discussions of the process or the resulting BPMN model may be used directly in BPM engines. 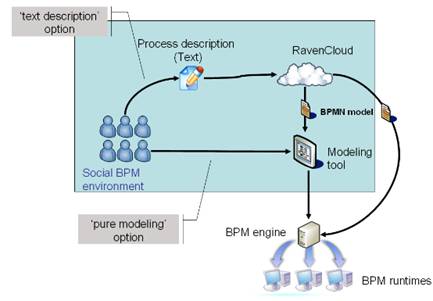 The latest version of the BPX Community Project is just getting started and as Owen Pettiford recently described in his BPM and Social Media – Another BPX Community Project, this time we are examining StreamWork as the collaborative environment to perform a process improvement project. Although the latest AcceleratedSAP (ASAP) Methodology and Business Add-Ons now includes processes, our intention is look at a more collaborative / less formal effort.

At the SapphireNow, StreamWork played a prominent role in the event and was described in press conferences and keynotes as a sign of the new innovative SAP. Indeed, when Co-CEO Jim Hagemann-Snabe met with SAPMentors at the event’s GC Reception, his first question was “Have you tried StreamWork and what do you think of it”.

In Sigurd Rinde’s blog describing his impressions of the SapphireNow, he reflects on StreamWork and the role of process in this application:

The first signs that SAP is slowly eying the BRP market can be seen in the launch of products like Streamwork. Too bad though that their first stab do not have process as the core (still only DIY manual process) – dear SAP, please make note of the P in BRP!

The new version of BPX Community Project deals with the dilemma and the following topics:

Through a series of scenes – each representing a different aspect of this combination -, this interaction will be examined.  Each scene will be based on the interactions between specific project roles (process expert, developer, etc.).  These scenes are short (take place over a matter of weeks) and focus on the particular goal of that scene.

Note: Some may say that StreamWork isn’t a Social BPM environment but rather a collaborative decision-making environment.  I think this is largely a definitional issue. One goal of this version of the BPX Community Project is to test the theory that StreamWork can be used for such process improvement projects.

Details from the latest incarnation of the BPX Community Project

As mentioned above, one of our main interests is to see which tools in this new environment are best suited for such projects.  Not only the selection is important, the order in which such tools are used is interesting – you can’t start a BPX improvement activity with 40 different tools, because it would be too chaotic and confusing for the activity participants.

Owen and I have once again taken our beloved roles of Ernie (BPX) and Bert (Process Owner) and have recently started an activity that looks at the problems associated with a Brand Conflict process.

In our first scenario, Bert (The Process Owner) has already started the activity and has just invited the BPX (Ernie) to join. The question that arises which StreamWork tools do they use? Since they are working on a process improvement project, one obvious choice would be to immediately start with the Gravity tool – the process could then be modeled graphically.  Another possibility is to describe the as-is process via text and then move use RavenCloud to create an initial process model.   We’ve selected the second option.

Note: RavenCloud is presently not a StreamWork BusinessMethod, therefore, I’ve been forced to add the Process image generated by RavenCloud as a reference to the activity.

Other possible uses for RavenCloud

Before we continue with or description of Social BPM methodology, I’d like to take a short excursion and examine other possible uses of RavenCloud.

RavenCloud might later generate process diagrams on the fly based on voice commands or other input devices. You could then create processes on the fly that could run in existing BPM environments. 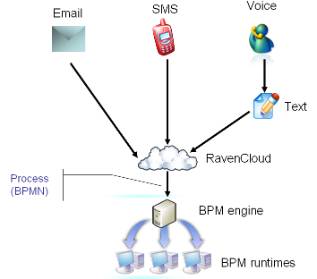 There are a variety of tools that use voice or text recognition to perform certain tasks. For example, if you look at the VoiceKit for Visual Composer, you will see something similar.  The use of RavenCloud and its ability to create BPMN models on-the-fly would permit the use of existing enterprise-ready BPM tools – these tools have functionality (monitoring, compliance, etc) that other process environments don’t have.  The integration with other enterprise tools / service would also be easier.

Of course, such scenarios might not be appropriate for more complicated processes and would have to deal with a variety of issues (parameter mapping, etc.) but think of the advantages in terms of dynamic processes – you could use RavenCloud to describe the process on the fly. Take a look at Apple’s purchase of mobile search vendor Siri for the importance of such environments.

If you also think about SAP’s on-device focus (purchase of Sybase, Project Gateway, etc), the use of such architectures would allow such mobile users to be much more flexible in terms of creating processes that reflect the dynamic context in which such workers exist rather than static processes that have a standardized structure.

In my opinion, there are two foundations on which to base Social BPM methodologies. The first is based on traditional BPM methodology while the second approach is based more on typical user experience from Web 2.0 environments – usually consumer-oriented).

However, the assumption that there is a single methodology for Social BPM projects may also be questionable. There probably shouldn’t be a single methodology but a set of tools that are available for Social BPM environments. Individuals involved in such collaborations could then select those tools which were the most relevant. One goal of the current BPX Community Project in StreamWork is to create one such blueprint that could act as an example for other such projects.

Obviously, this blog wasn’t intended to defineTHE Social BPM methodology but rather to start the discussion of this interesting topic.  The use of RavenCloud in such Social BPM projects is one possibility to assist participants to understand a process better.  As the BPX Community Project continues, look forward to our blogs as we examine the relevance of other tools in such endeavors.

for me the topic or term social BPM sounds a little too academic. I would reduce it to process related collaboration under use of what we call Web 2.0 tools. The main point for me is that we enable people to provide their valuable input and ideas for process improvements and that they can discuss these under use of a visual representation of the process.

This is the story and there are many new and older tools available that can already help here to a certain degree.

To avoid staying at an chaotic level I would recommend to have a "translation step" inbetween the "creative" phase and the final and formal documentation. This step helps in parallel to ensure the quality of results.