Once a variable has been created, the definition of some parameters (Processing By, Variable Represents and some others) can’t be modified within Bex Query Designer or IP Modeler.

This blog describes how to change some variable parameters after it has been created and saved.

As mentioned above it is not possible to modify some parameters within Bex Query Designer or IP Modeler after a variable has been saved. 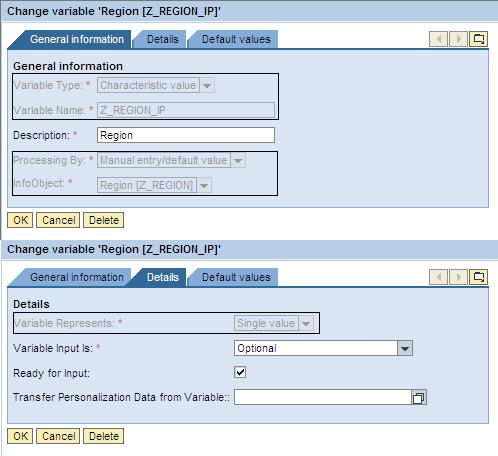 SAP recommended way to solve this issue is to delete this variable and create a new one with suitable parameter.

But what should we do if this variable already has been used within 100 queries ?

In this case we can use not recommended, but proper way – change these parameters directly via RSZGLOBV table.

When a result has been retrieved (it should be 2 records for one variable – M and A versions) select A version and press Change button (F6).

In the next screen it is possible to change any parameter of variable. In our case we want to change Variable Represents (Select parameters in RSZGLOBV table) parameter.

Change the content of Select parameters (VPARSEL) field from P to M and save the changes. 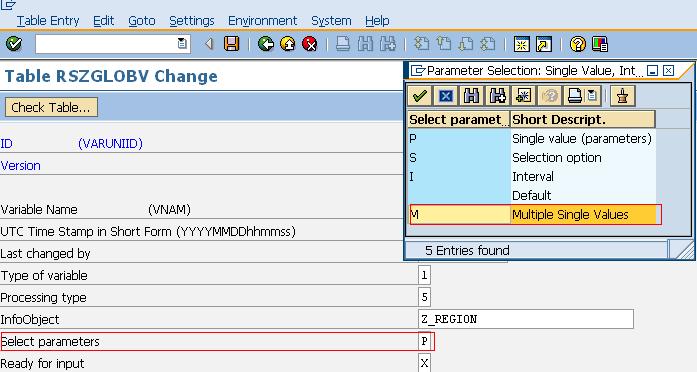 Do the same for M version entry in RSZGLOBV table.

Now we need to generate all the queries that use this variable.

Type info provider technical name with the queries to be generated and press Execute (F8).

Former Member
May 21, 2010 at 6:43 am
Nice work...
We come accross this scenarion many times , to change the variable , but as it does not allow to change..we have to create new variable..which leads in creation of many variable ....

Geafar Narcis
October 7, 2011 at 4:49 am
We tried to change the type of a variable from M "Multiple Single Values" to S "Selection Option" in this way, but it did not work. When we try to genereate the queries we got the error "Variable ... does not exist or is incorrectly used". Any ideas how to solve this issue?

I had the same requirement and received he same error message during generation. Did you ever find a workaround or creating a new variable is the only solution?