I’m decompressing from three intense days at SAPPHIRE 2010. It exceeded my (low) expectations by some distance but left questions unanswered.

Those who have been following the certification debate will know that the SAP Certification: The Certification 5 Report. The feedback has been awesome and on behalf of the guys, I want to thank everyone who has taken the time to study and feedback on our thoughts.

As part of the internal marketing, it was always the plan to present one of the co-CEO’s with one of Hugh MacLeod’s aka @gapingvoid‘s print. The cleaned up version of quality. In that cartoon, the idea that SAP geeks are into quality is not enough. They have to be amazing. It’s really a marketing idea. Something that SAP might want to run with in some fashion. It’s not a new idea, it reflects an idea Hugh MacLeod came up with for Microsoft called the Blue Monster but with a story and meaning attached.

I arranged with Hugh for his company to send a framed copy to Jon Reed who kindly transported it to SAPPHIRE. At that time, we thought Jim Snabe might be the person we’d wish to present it to. We were convinced he would be the right guy. We worked with Mike Prosceno who handles the blogger program to ensure we’d find a slot somewhere on Jim’s diary. It was always going to be a moving target.

A couple of Mentors got to meet with Bill McDermott, co-CEO. As I walked in the room the conversation went like this:

Mike Prosceno to Bill: “This is Dennnis Howlett”

Bill: “Hi Dennis thank you so much for the video.”

Bill: “The one with the cartoons. I totally loved it and we used it in a leadership meeting with the company’s top 200 executives just prior to SAPPHIRE.”

The penny dropped. This was a Six Questions for SAP Leadership video I recorded and posted on YouTube and which has seen around 2,570 hits. Now I know why. Each question is prefaced with one of Hugh’s cartoons. Included is the not-clean version of Quality because at the time, Hugh hadn’t made that version.

My head exploded as I looked at Jon Reed and realized that Bill was the person to whom we should give the print. (Sorry Jim, next time.) During the conversation, Jon started rambling on about the Certification Five and its work on the paper. I was sitting there thinking: ‘What the heck is my homey doing?’ As he finished, Jon had the nuts to ask Bill if he could help grease the squeaky wheels on this topic within SAP.

To more amazement, Bill didn’t hesitate and here I am going to paraphrase. “Sure…you know that I believe certification is important.” That gave me an opportunity to get on my ‘SAP certification should be something engineers value and which helps in improving implementation quality’ hobby horse. Bill got it straight way.

With Mike Prosceno’s help and Bill Wohl’s influence, (BW is head of field communications) we quickly cobbled up a new arrangement for giving the print to Bill the following day. The idea was to do this at a small presentation at the Influencer’s Dinner. Time’s ticking by and I’m sweating. Would Bill get side swiped by a customer? Then I’m thinking, I hope he’s not offended. Then I’m thinking…get me outta here. He was later than anyone anticipated for some reason. When Bill saw it, I had the opportunity to explain the thinking. I’ve now done this so many times I can remember the elevator pitch in my sleep. Bill was delighted. “Thanks guys, I really appreciate this. That’s going on my office wall.” There then followed a wee photocall that includes Bill, Jon, Martin Gillet and myself. (see pic left taken on Martin’s camera but uploaded to my Flickr for convenience.)

We must have lost Leonardo somewhere. That’s a darned shame because Leo’s commitment was intense despite the fact he had to field many of our conference calls at some airport or another.

Other Mentors were hanging around so if Bill didn’t ‘get’ THAT message then here’s reminding him. SAP Mentors get stuff done. SAP Mentors have balls – big balls.

There is a postscript to the story.

4/5 of the C5 were showcased by the Enterprise Geeks on one of their podcasts. Thanks to Rich Heilman, Thomas Jung, Dan McWeeney and ringmaster/uber geek Eddie Herrmann. If you don’t know these guys – they rock. Dan and Eddie are past winners of DemoJam and do ‘seriously sick stuff’ as Dan might say.

Do listen to the podcast. We’re honest in our assessment and were kept on our toes by Eddie who I swear was an investigative journalist and DJ in a former life.

The big question though is have we made a difference? I think so. However, at the line of business level SAP is reluctant to move away from the idea that SAP should refactor certification as a professional class qualification. It still thinks that tweaking the program rather than re-engineering it is the way to go. Between the four of us at SAPPHIRE Orlando, we consistently came up with people who said: “If certification was meaningful I’d be in line to have my people do it.” Even Eddie Herrmann, who has resisted the idea is coming around. He said to us: “If this was something that has value for me, I’d do it.” Like all things of this nature: the what’s-in-it-for-me factor looms large in our thinking but less so in that of SAP where numbers shoveled through the various academies seems to be the top priority.We think that’s fundamentally wrong and will not change the situation one jot.

This is not a discussion that will go away anytime soon.

I hope that in some way this encourages you. As we said on the podcast, if others (whether Mentors or not) want to do this kind of ‘big *** hairy’ project then we are more than prepared to share our experience.

In the meantime, I also want to extend thanks to Mark Finnern who did a bang up job ensuring that most of the Mentors (except me) were Mentor Compliant i.e. wearing Mentor rugby shirts. However cheesy you might think it looks it was an awesome sight on the hall floor and made the photo call with Bill McDermott, co-CEO a Mentor event that will live in the minds of my colleagues for a long time.

You guys (C5) had done an amazing job, and I know you will continue to do it...that's a strong probe that we SAP Mentors are a very important key inside the SAP ecosystem.
You know you can count with me, I don't need to tell you -;)

Jon Reed
May 19, 2010 at 9:01 pm
Blag, thanks for your good words. I believe that all of the "C5" consider it an honor to do what we do as Mentors, not the least of which is because of fellow Mentors like yourself who have our back as we have yours.

Tonight it is late and sleep must factor in before I can anything else coherent, but I would like to say to readers that Dennis has captured our viewpoints very well, really as only he can. The Mentors have been challenged to not simply point to the flaws but to provide a creative response to them. I can only say that we have taken that as our calling card.

Who knows why we have such passion for SAP or for certification in particular, but we sincerely hope the outcome has lasting impact. Too many thanks to acknowledge here, but Mike Prosceno and Stacey Fish of the SAP blogger program are instrumental in any such dialogues. Mark Finnern, Mentor chief, has provided the framework for these kinds of initiatives to grow. We are acting on behalf of community interests, so we always welcome your feedback.

Jon Reed
May 19, 2010 at 9:10 pm
One last mention: the remaining 1/5 of the C5, Michael Koch, was continuing the discussions at Frankfurt. I'm sure knowing Michael he advanced the conversation with his usual thoughtful conviction, but we missed his presence here. Michael, we could not have reached this point without you.

Also he will be presenting a session at SAP Inside Track London on Sat June 19.

Glad you guys hit a few home runs in Orlando.

Former Member
May 19, 2010 at 8:59 pm
I am not super excited yet - but I will be, once I see some proof of Bill doing something about it. He said the right thing in his meeting with mentors - if he said anything else, we all would have been terribly disappointed. So good that he said what he did.

Now it is time for action - I am curious to see where this will figure in the CEO's priorities for next year. Certification was not publicly put as a priority in any of the big announcements - so I am eagerly waiting to see how this unfolds. Till I see that I will hold judgment on he "gets" it.

But irrespective of what happens to it at the end - the 5 of you have done a tremendous noteworthy job, and have demonstrated the value of mentors to SAP and the community.

Dennis Howlett
Blog Post Author
May 19, 2010 at 9:59 pm
Vijay - I had to leave as you know at the point where I heard you about to launch into the topic but heard about it afterwards.

You are correct and I have to be mindful that a co-CEO has hundreds of conversations over the course of these types of events. Everyone wants a piece but any company will always give priority to customers.

However, one thing I omitted to mention: I heard Bill McDermott repeat the certification importance thing in the exec Q&A as part of a broader question that didn't touch on the topic. That sounds like something has 'stuck.' Or maybe that's the result of an over-active imagination?

As you correctly say: actions will speak much loader than any words.

Dennis Howlett
Blog Post Author
May 19, 2010 at 9:54 pm
I'm not sure if I've emphasized this enough. Purposeful TEAMWORK is critical to project success. We had that down pat almost from the get go.

Mark Finnern
May 22, 2010 at 5:32 am
Hi Dennis, Jon, Michael, Leo, Martin,
Reading your account of the events last week makes me so happy.
It beautifully validates the vision I had when I first pitched the idea to create a program around the most passionate community members. Give them opportunity to shine and magic will happen for the benefit of everyone involved.  Thanks Mike and Stacey for creating opportunities.
It is a great milestone, and I am hopeful that real change will follow and one day people will proudly tweet about being SAP certified.
Can’t wait and thanks so much for all the effort you put in.
Really amazing, Mark.

By the way, here is proof that Jim Snaabe got his Hugh Mcleod print too 🙂 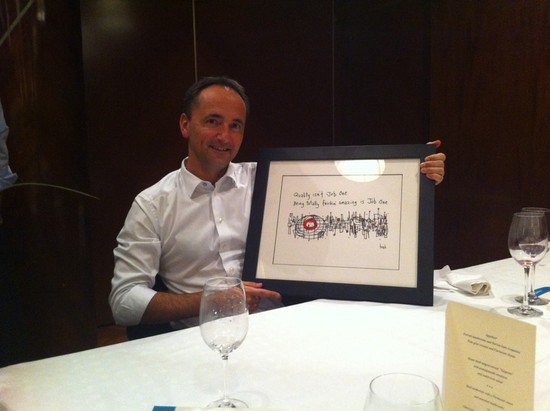