One of the things I did before I left town last week was to peek at the SAP sustainability report for 2009.  I will admit up front that I was in a rush, with many other tasks to complete before I traveled, so these are snap judgments, not deeply though-through critical analyses.

One aspect I’ve been hearing about from SAP folks is that the report will be more interactive, “cooler”, with use of new technologies to access and display the data.  I understand it is in SAP’s best interest to showcase their best and brightest, and if the report looks slick it will have a certain wow factor among many.  Those who know me will understand I’m not easily convinced of quality work by a slick-looking interface.  It’s a wrapper.  If it works great.  If the data make no sense, then not so great.  If it doesn’t work, the data can be right or wrong but people may dismiss it.

The first glitch I found almost right away, with a pop-up box of some sort showing up on the right side of the screen.  It hid the data behind it and I could not fathom what it was for, nor how to make it go away.  Maybe it only happens in the version of Firefox I use. 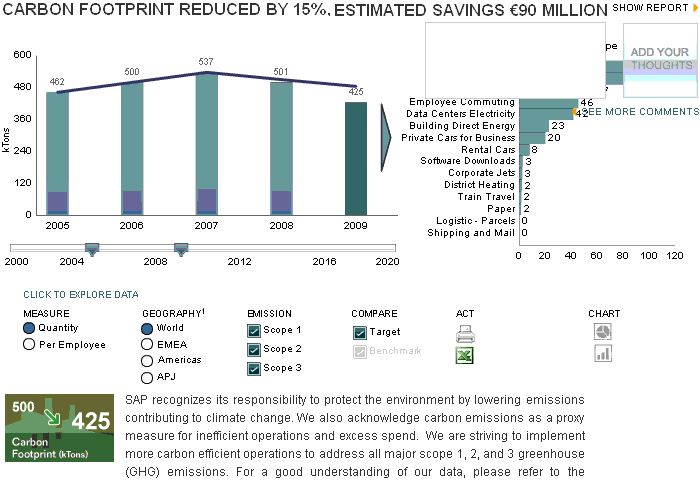 Note that I cut and pasted the images a bit to make them acceptable to the SCN 700 by 500 pixel rule.  It’s the same data, but you are likely to see more whitespace when you browse to:

The next several screen are where I attempted to get an understanding of where the improvements from 2008 to 2009 were, first looking at the world level, and then looking at the area (e.g., Americas).

This was not too hard, particularly since I was familiar with these breakdowns from the 2008  report.  As before, business travel is a big carbon footprint for an electronic services company such as SAP.  Reducing travel and having virtual meetings is almost a no-brainer, but it takes discipline and follow-through to make the gains stick, even when an economic uptick occcurs.

This chart is per employee. 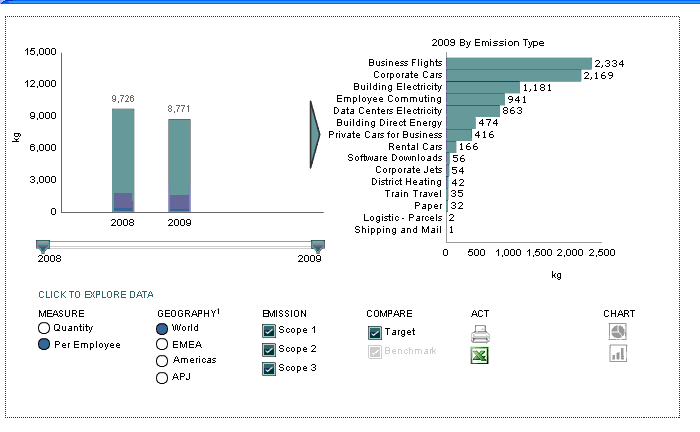 This data shows the Americas contributions, per employee. 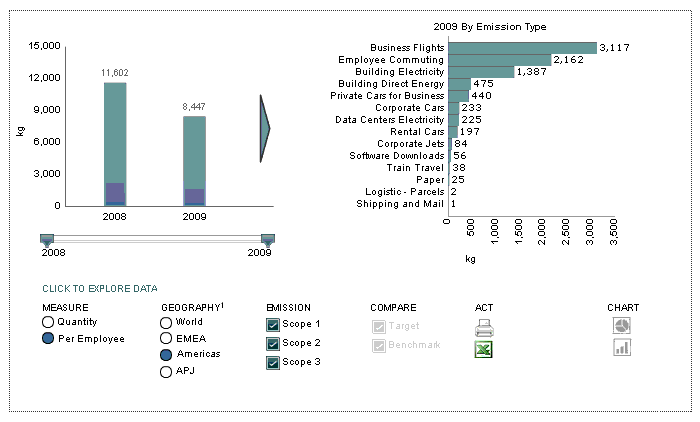 Here is the 2008 data, for comparison, in the Americas, by employee. 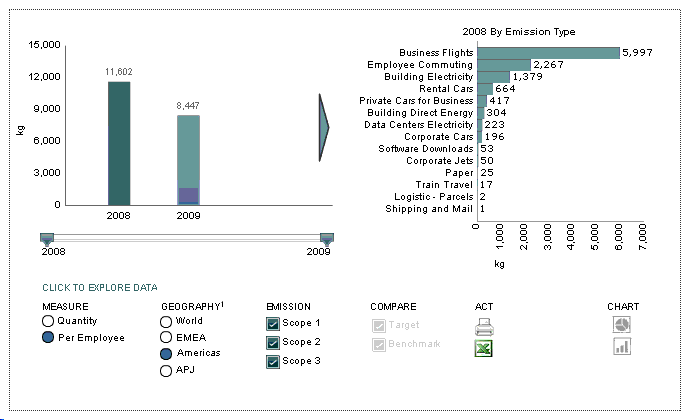 Unfortunately, when I tried to see this data locally, so I could draw my own charts and graphs, I got a 404 error.

SAP said they would work on this, but I have not tried it again. This chart of world data per employee  has a bit of data loss on one of the legends.  A minor issue, but annoying as that was what I was trying to compare. 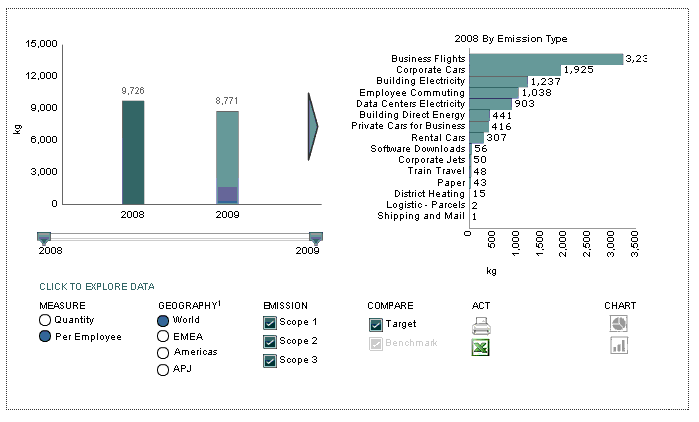 Made it to Orlando.  Here’s Rich Heilman and I waiting for the shuttle bus.  It worked, but was time-consuming, so carry water bottles, and hopefully you’ll find a friend to share the time with.

After my bus finally arrived I caught up with Bob Berntsen of the ASUG BITI team. 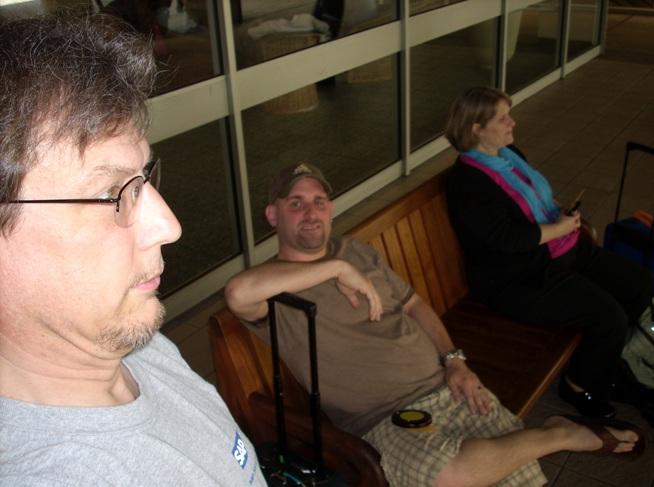 Bikes taxis on the street

This year, the fleet from Redi Pedi Cab Services is larger than ever, with 20 vehicles and drivers pedaling up and down International Drive and the Convention Center vicinity.

I had a conversation with the owner and several drivers on Sunday, after arriving on town, on the challenges of finding sponsors, dealing with traffic officers, and the generosity (or lack thereof) from customers and potential customers.  Because of monopoly arrangements, or perhaps others biases, these no-pollution, sustainable transportation vehicles are banned from certain hotels, and chased off the conference center taxi area. 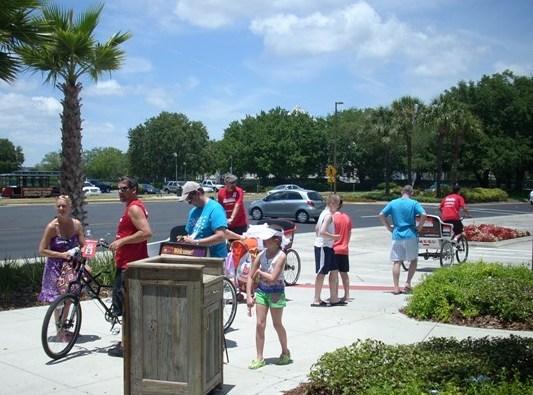 I’m pleased I was present for the first face to face meeting between Abesh Bhattercharjee and Jon Reed.  You can tell they hit it off. 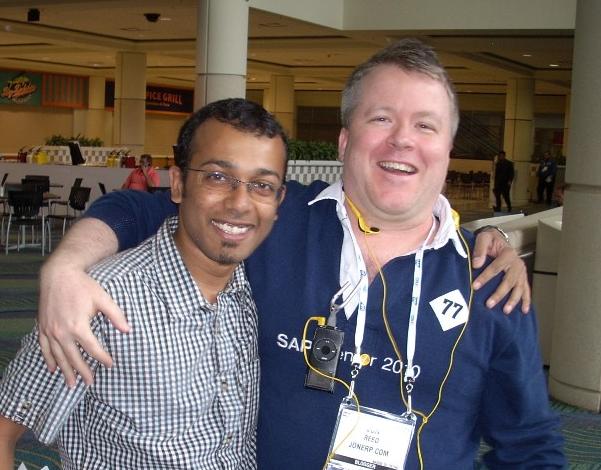 Mentors in the house

Can you spot and name the newest Mentors?

Can you tell us which new Mentors were late to the meeting?

That’s Kevin Benedict, in the green shirt, second from the right – I’ll be talking to him soon about mobile topics.

And Tammy Powlas is second from the right – she received one of the Leave No Trace water bottles I carried in. 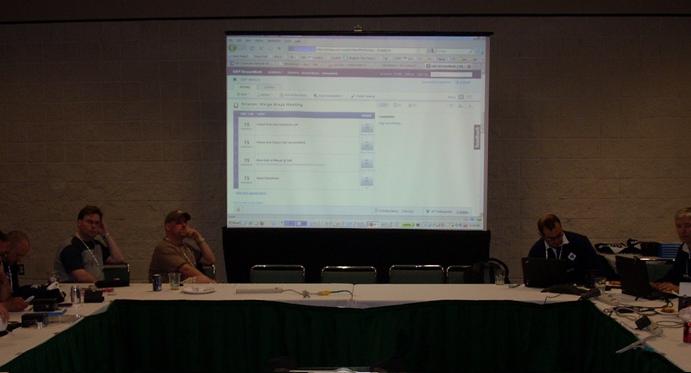 Abesh is plotting with Jon Reed on the far left – he also got a LNT water bottle, because he arrived without a drinking container.

Mentors behind the lens

Hopefully, you will see very soon a number of video interviews with and by SAP Mentors.  We got Flip cameras to record our findings, our opinions, and the crowd speak.

Check the SAP Mentor You Tube channel for more.

p.s. Simon To blogged on his first day, and has a bunch of SAP Mentor photos, on the ASUG.COM site (login required):