Continuing on with the “KISS” paradigm, I upgraded a C# and another viewer VB app to CR 2010. No errors this time. I deleted the app that was giving me errors re. the BusinessObjects.Licensing.KeycodeDecoder not found. Reopened the app in .NET and this time it worked. So I suspect that the error was due to some sort of conversion problem. See my blog “My day (1) training on CR 2010 Beta”

On to exporting. The viewer has the following export types available;

The following are export formats available off of the Report Document Object: 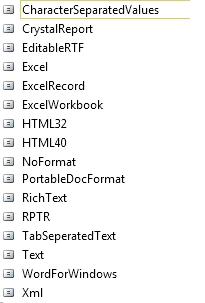 Thus two new formats; Crystal Report Read Only (*.rptr) and Microsoft Excel Workbook Data-Only (*.xlsx). A few cursory exports appeared to work well with no truncation or other format issues so familiar from previous versions of Crystal Reports. Except, rptr. An attempt to run a .rptr file in my simple app resulted in “Load report failed” error. Both using CrystalReportsviewer1.ReportSource and ReportDocument.Load. An attempt at opening the .rptr file in the .NET IDE CR design environment resulted in the following error:

As far as I am concerned, it’s OK that the report will not open in the design view. However I sure hope the error changes to something a bit more intuitive…
Oh, an attempt (just for kicks) to open the rptr file in CR 2008 resulted in the expected error;

“This document could not be opened.”

For export formats available in previous versions of Crystal Reports see the wiki “Available Export Formats, Crystal Reports 9.1 to Crystal Reports 2008“An FYI. If you are looking  for a working copy of the developer help files for CR 2010, click here.