My concerns with the SAP Provisioning Framework

0 0 327
This time I would like to talk about a couple of issues I have with the SAP Provisioning Framework. Overall, I

this post are not part of the standard. However, hope is left since the SAP Provisioning Framework will be

stack. Please notice at the bottom of the picture how the user creation is done. 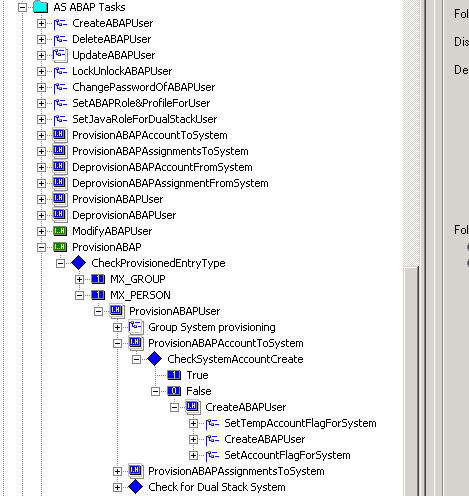 Configure a retry on all tasks that connect to the backend. I’m not going to talk about this one

much because of obvious shortcomings. What if the network is down too long and all retries fail? What if other

tasks than provisioning tasks fail? Do we have to configure a retry on all tasks in this execution tree then?

Configure an On Chain Fail handler on ProvisionABAP. See the following screenshot:

A very nice feature. Here we can add a task that is executed whenever a task in the task tree below

The second point is an excellent entry point for further considerations. What can we do with this? I’m going

to present 2 ideas. The first one is pretty straight forward and easily implemented, the second one is a

We could write the on chain fail handler to flag users whose provisioning failed. With a smart flagging,

corresponding repository. The funny thing is that there is such a background job in the standard which

almost does the job: It is called Initial Provisioning:

It sends selected users into provisioning again, only the filter that selects who is provisioned again would

have to be modified. And a mechanim is needed to remove the flagging once the provisioning has been