In our previous blogs, we have covered the following topics:

IAS 27 is a key standard for preparers of consolidated financial statements even though it does not cover all aspects of the consolidation process:

In this blog, we will focus on current consolidation procedures excluding translation of foreign operations (see How Starter Kits meet IFRS – IAS 21).

Defining the scope of consolidation

Accounting for investments in consolidated financial statements is different depending on the control or influence the investor has over the investee:

In the starter kit, the scope of consolidation can be automatically calculated, based on: Adjustments to local data may be necessary to in order to:

In the starter kit, adjustments are recorded by manual journal entries:

As regards operations between a parent and its subsidiaries or between subsidiaries, IAS 27 sets out the following principles:

Automatic rules have been configured in the starter kit for the elimination of:

Subsidiaries are consolidated using the full consolidation method, which means line by line adding together like items of assets, liabilities, income and expenses of parent and subsidiaries.

IAS 27 lists the following steps in the consolidation process:

Elimination of investments and calculation of non-controlling interests are automatically handled by consolidation rules. Dedicated audit-IDs are used to ensure a comprehensive audit trail.

As shown above, the elimination of parents’ investments in consolidated entities is made on the dedicated audit-ID INV10.

As regards booking of non-controlling interests, different audit-IDs are generated depending on the original audit-ID (on which the amount at 100% has been accounted for). In the example above, non-controlling interests are stored on audit-ID “NCI-PACK01” because they correspond to the NCI’s share in the “local” subsidiary’s equity (as entered in the package on audit-ID PACK01).

The correlation map between original audit-IDs and the audit-IDs used for NCI calculation is the following: 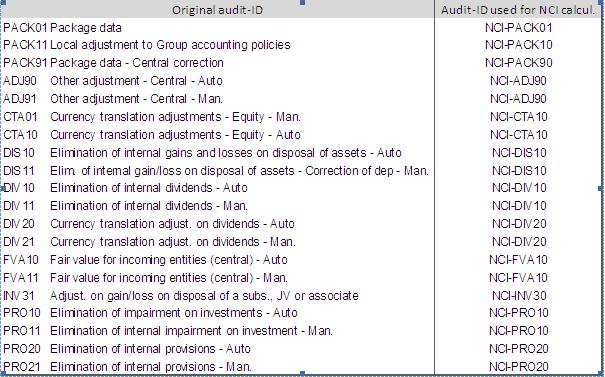 In the next two blogs, we will focus on how to handle changes in scope according to IAS 27 and using the starter kit: