I will soon be ready to capture my initial efforts as a Virtual Machine.

So, to continue, as readers of my previous blog, you would know, I hit a snag upon the installation of the NSP, which I fixed. In helping to find the fix, I installed the MaxDB Database Manager that came with the NSP. It’s documented with the NSP html help.

Also, documented and delivered with the NSP, is a SAP GUI. I’ll navigate to the location “C:Users
spadmDesktop     rialSAPNWABAP701SR1_TRIALSAPNWABAP701SR1_TRIALSAPGUI710C3” and install it. I do believe this may be a cut down version that does not have some of the Business Warehouse/Intelligence (BW/BI), functionality I may require, but we can always uninstall and replace it with the full LOGON version at a later date.

So for now, on goes the SAP GUI. After about 3 mins, I now have two extra icons.

The short duration of install worries me a little, as I feel there is not much in this version, but for now, I’ll try and work with it.

I will complete the “SAP Logon” setup as instructed by the NSP help. Then test it, by starting up the NSP, and trying to log on to client 001 and using the DDIC user. Well, as I speak, I got a connection error, and the NSP has returned to a status of yellow, and is not happy. I took a look at the Windows Services, and noticed again, that my “MAXDB: NSP” service is not started. So I will reboot and have another look.

After rebooting, the “MAXBD: NSP” Windows Service has started, so I started the NSP again in the MMC, and tried to logon again.

For the record, these are my Windows Services for the NSP install

You should have 4 MAXDB entries, and in my case, only the “MAXDB: NSP” automatically starts.

Then there are the two SAP, once NSP specific service

and finally the XServer

This time the logon was successful, and I am in. But, after a couple of compilations occuring, I get this !

So, I start “SICK”, and the the following message. “OS release Windows NT 6.1 7600 4x Intel 80686 (Mod 37 Step 2) is not supported with this kernel (701). Then it says “Severe problems were detected during initial system check. Please, do not use that system before fixing these problems”. What I am to make of that, I don’t know. Maybe it is complaining about Windows 7?

So I continued, and all seems well. Apart from the anoying noises it does. Sound can be removed using the far right button on the toolbar->Design Settings->Sound 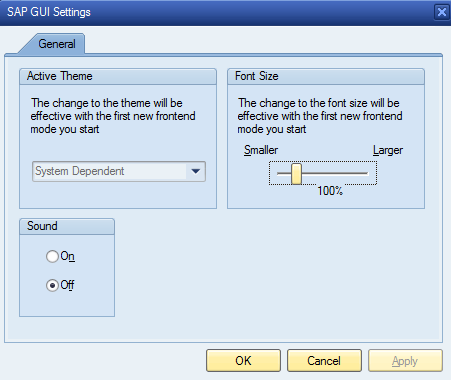 Anyway, I decided to Log on to client 000 as SAP*, then BCUSER, and DDIC. All are giving me the same “Database Inconsistency…” message, but no short dump any more. I played around with some transactions I knew, and after the compiles I eventually get in. I am beginning to confirm my suspicion that the message is because it does not know the operating system it is sitting on.

So, moving on, if, like me, you have ever logged into “Client 001”, as BCUSER for the first time, and have already done so here, you probably got a message saying that there is no “logical system” for “Client 001”. 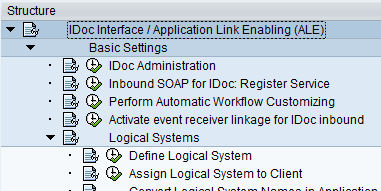 It may be a good idea, to log into Client 001, with BCUSER, and run a couple of transactions, e.g. RSA1, SE38, just to satisfy any doubts you may have about a working system.

Having successfully performed the small tasks above, I am happy that the start up message I am getting, is down to the OS. So for now, I will live with the inconvenience and attempt to make my first Virtual Machine (VM). In preparing for the VM, I am going to use the extra space on my hard disk and create a “D” drive partition for the VM files.

Download and install VMware VCenter Convertor to create the VM from my physical machine.

So to date, here is a summary of my software

Now to attempt the Virtual Machine. Will let you know soon.

Well I am delighted to report my VM worked a treat. I left it on overnight, just to see if the NSP would fail for whatever reason, but in the morning, it was still up an running.

Here’s how I converted my physical machine to a VM using the VWware Converter Standalone Client.

First I prepared the laptop. I “Stopped” the MAXBD, NSP, and XServer Windows Services. That’s a total of 6. Then I went to Windows Disk Cleanup, from which I managed to remove an astonishing 2gb. Where that from I don’t know. I powered up VMware vCenter Converter Standalone, and began.

On the first screen, simply choose “Convert Machine” to enter the Wizard

Leave the defaults, and “Next” 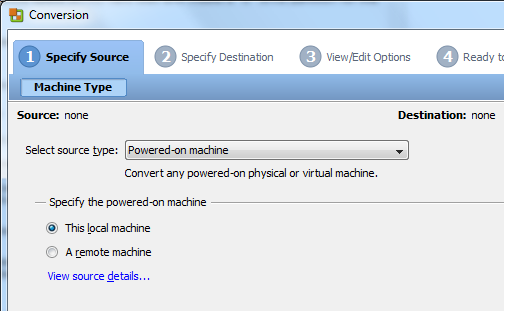 Give it description “Name”, and “Location” for the file, then “Next” 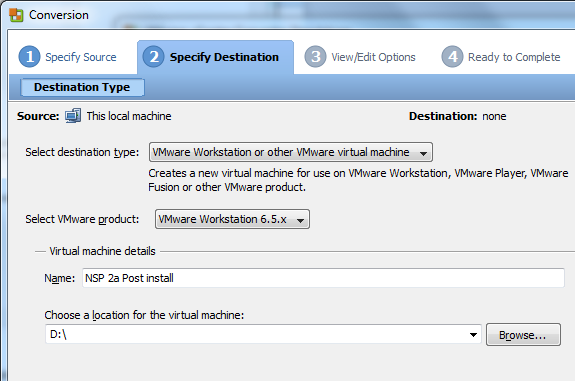 Check and review the options. Though I did get some warnings, I left them as is, then “Next” 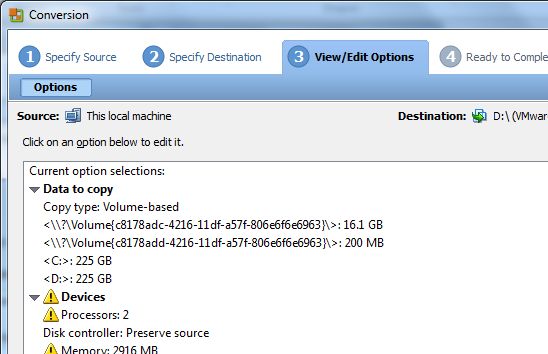 Finally, “Finish”, to kick off the process. 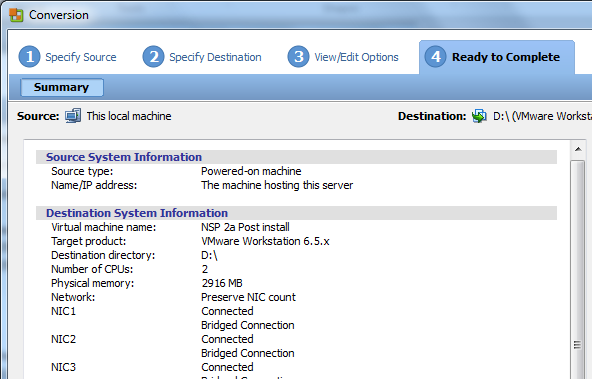 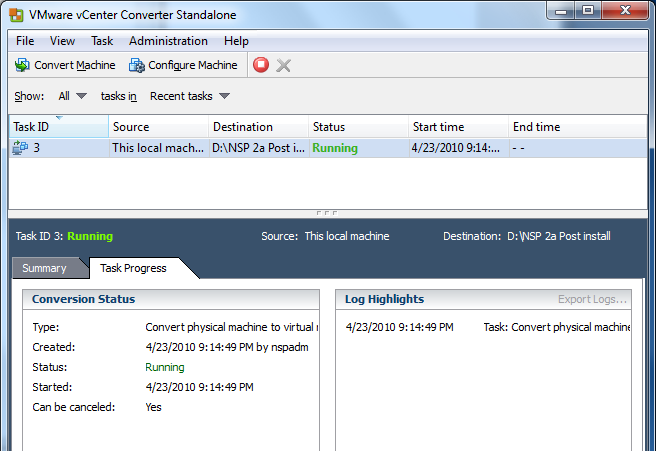 It took about four hours, then I had my VM file, sitting in a VM directory on my D drive. Don’t be fooled by the “Running” time, as it fluctuates when progress is made. At the beginning, it said mine was going to take about 7 hours.

To test the VM, I downloaded and used Sun’s VirtualBox.

The process is pretty straight forward, so I will simply show you most of the screen shots, what to expect. Just pay attention to the amount of RAM I gave the VM, and that I pointed it to my D drive, VM file. 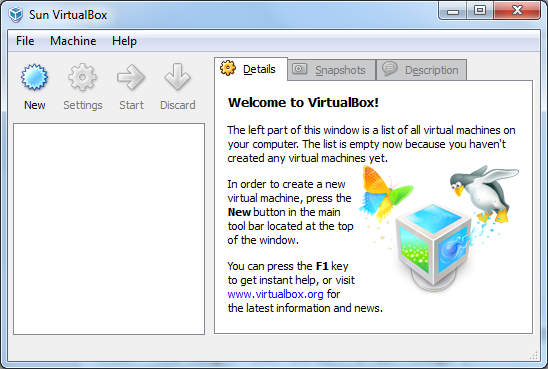 Here is where I told it, what OS the Virtual Machine is going to run. This is what is called the Host OS. If I had created this on an XP Machine, I would have chosen XP here. 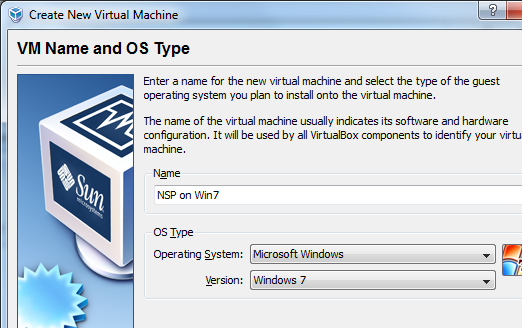 Here I just gave it everything I can for RAM 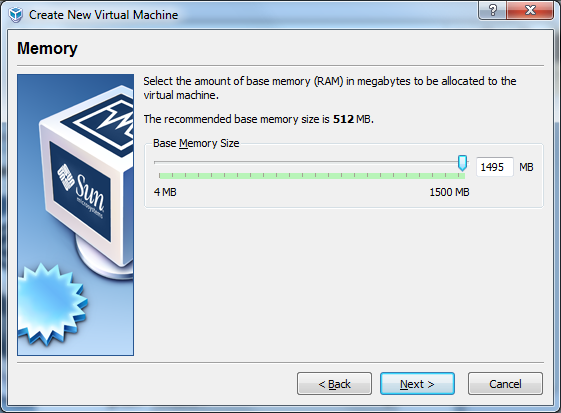 And here is where I pointed it to the VM file, “nsp 2a.1.vmdk”. You must select “Use existing hard disk”. Then you will get a screen from which you need to navigate to your VM file, and add it (sorry, but i missed capturing this here). This becomes your new VM in VirtualBox. The result from this step should look something lik below. 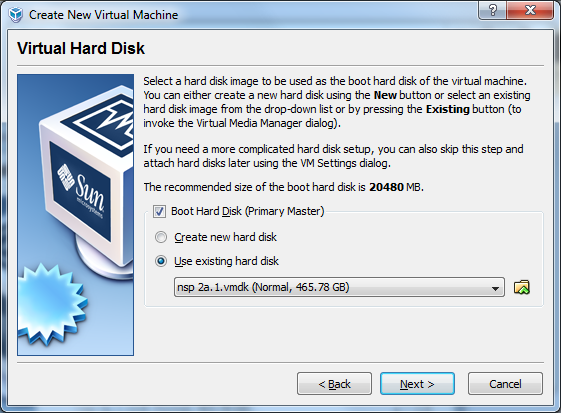 Now for the big test, seeing it running on my machine.

Select the VM machine we had just created, and click “Start” 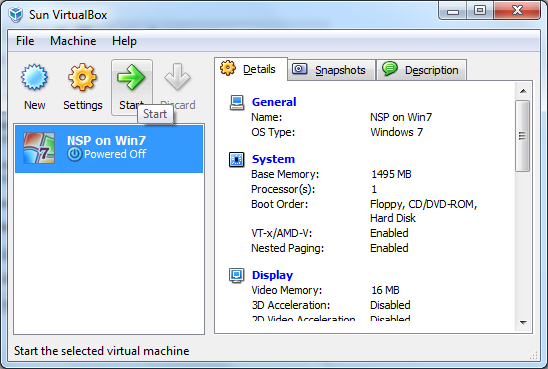 Finally the proof. It was difficult uploading the image base on the size limitation, but if you look carefully you can see the screen shot of my machine, with the VM running inside. You can vaguely make out the NSP MMC (green status), and the SAP GUI compiling a program, with a message. I am not too happy with the screen resolution of the VM, but I think I’ll have to play around with the settings. 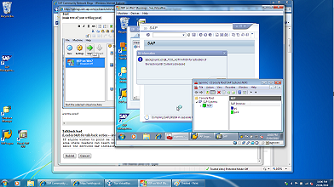 I will conside this my first milestone, and finalize this specific blog, as it is getting a little too long.

For more activities, continue to my next blog…

Steve Rumsby
April 23, 2010 at 3:02 am
I have also installed NSP on Windows 7 and get the same "SICK" message, and as with yours the system works fine after that as far as I can tell. I wasn't expecting to get this far, actually, because I knew Windows 7 wasn't supported. I'm happy to carry on using the system as it is, but if anyone knows of a way to persuade it that Windows 7 is an OK operating system, I'd love to hear it...!

Former Member
April 23, 2010 at 3:24 am
Great BLOG regarding your trials with the SAP NSP install.

Steve Rumsby
April 26, 2010 at 1:26 am
I did first try installing in the Windows 7 "Virtual XP" mode, but after an apparently successful installation the instance wouldn't start. No idea why. I should have tried VirtualBox or VMWare next, I suppose, but instead gave up and went for a native Win 7 install, which worked better than I expected. If only I could persuade it that Win 7 is OK (which it apparently is) all would be perfect. Is there a way of disabling the OS check, or is it buried too deep in the kernel?