When California begins welcoming spring, I try to take advantage of the beautiful weekend weather by hiking with my family (wife, Karen, and Gracie the wonder dog!) or taking the Harley out for a ride. But this weekend, I’ll be flying to San Diego, Calif. to fly somewhere in the Pacific to take advantage of a unique opportunity to embark aboard a US Navy aircraft carrier and have an overnight stay on the USS Lincoln for a firsthand look at life at sea. 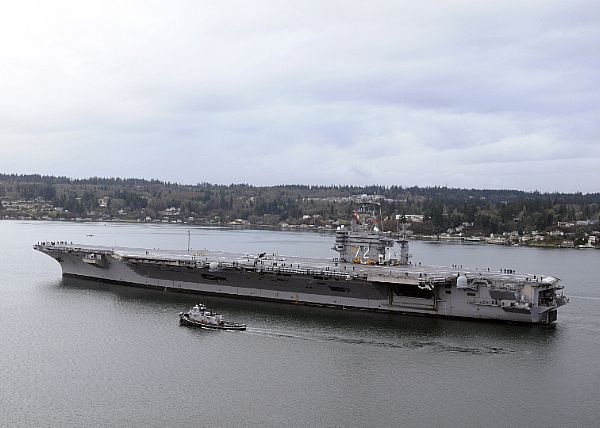 Commissioned on November 11, 1989, the USS Lincoln has been deployed to the Philippines, Somalia, the Persian Gulf, and Indonesia.  The 97,500 ton ship reaches a speed of 30 knots, powered by two nuclear power plants which can keep the ship running without refueling for more than 20 years. Four catapults help jets accelerate to take off from the deck in only a few seconds.

Here are some accounts from a few well-known influencers I’ve had the chance to meet in the past who did a similar trip aboard USS Nimitz last year: Guy Kawasaki, Robert Scoble, Charlene Li, Andy Sernovitz (see links in their posts to the other bloggers who comprised their group). I’m told we’ll be flying onboard the carrier on a COD (Carrier Onboard Delivery), sitting backwards in a windowless C-2 Greyhound. Here’s a preview of one landing on the USS Theodore Roosevelt:

A Crash Course…hopefully minus the “crash”

Though this is a fun, personally motivated expedition (and in fact I will pay all travel costs personally without SAP reimbursement, and will also reimburse the US Navy for their specific costs — so if you’re an SAP shareholder or a US taxpayer, put your mind to rest), it’s too interesting to not share this rare perspective with the SAP community. I began thinking about the business value I expect to find aboard the ship, and some of the themes I’ll be looking for and sharing over the course of my upcoming blog series are:

By the way, the US Navy is also a huge SAP customer, and very involved in social media.  (We’re both members of the Social Media Business Council.) It’s an honor to be able to partner with them on thesevarious levels, and I’m looking forward to sharing my experience with you after this extraordinary adventure with the men and women of the U.S. Navy.

"You lucky, lucky bastard!" - Prisoner in Life of Brian.

Susan Keohan
April 22, 2010 at 1:13 pm
What an amazing opportunity!
For my part, I would be interested in how processes are optimized (of course).  Even though the aircraft carrier is a huge ship - over time, any vessel shrinks dramatically according to the number of people aboard and the time at sea.  Smoothing out processes would make this time at sea much more efficient and comfortable. For example: How are so many housed aboard a ship, how is the supply chain utilized, and do they need an SAP workflow developer on board 🙂

But wait, I am also concerned that if all personnel took shore leave on an island, would the island tip over?
Cheers
Sue

I hope to learn more about the processes on board a Navy ship.  Not the specifics, but maybe some examples of how they shift and adapt.  I imagine they are very mature and some might seem antiquated traditions, so I wonder about agility... but suspect that in times of battle they can be quite agile and responsive to changes in their broader environment.

Also: When I was in college in rural Pennsylvania, we used to go "cow tipping" in the middle of the night (#stupidfraternitytricks).  I bet the Navy does something similar... sneaks up on islands in the night, everyone disembarks, the island tips over, and they sail away laughing at that silly gullible island...

P.S. - for those not in the loop, the second paragraph is an inside joke... here's the video: http://www.youtube.com/watch?v=bs23CjIWMgA