4 1 1,117
A couple of days ago I was browsing in the IdM Forum on SAP Developer Network and I read Sequence of event tasks. I posted a reply since I had been confronted to the problem earlier, then I thought this would be a good topic for a blog post. There are several use cases where you want to make sure that a certain task waits until another has done its work. One example is as follows: You have two connected target system. In one you can only create accounts if the user already has an account in the second one. The provisioning jobs may be kicked off more or less simultaneously, however, this doesn’t give you any guarantee about the order in which they’ll be picked up by the dispatchers. What one wants here is certainty.

Another example is what I present here in this blog post. I’ve implemented a simple request handler.

Two words about what I mean with request handler: It’s a workflow that handles a request, that is a workflow that operates on an instance of entrytype MX_ASYNC_REQUEST. A request handler architecture can be useful if you need to do complex computations before submitting an operation. In that case you don’t want to directly write data to your target objects, be it persons or roles. You first want to plausi check the values, for instance. If the data is not ok, you make the request fail and the objects remain untouched.

A simple example for such a request handler is part of the SAP delivery, if you download the Identity Services package you’ll get a very simple request handler.

So much about the general setup. Now imagine 2 or more different requests are being sent into this workflow doing modifications on the same object. Then those operations might interfere with each other, overwrite values in an unintended way and so on. Readers who are familiar with common server programming know what I’m talking about: There are lots of situations where one must prohibit concurrent access of more than one thread to the data. Same here.

In the Java programming language, one way of limiting concurrent access is the synchronized statement. The request handler I’ve presented here implements such a mechanism. It prevents the workflow from continuing when there is already another item already in process by the workflow. See here the structure of the workflow task: 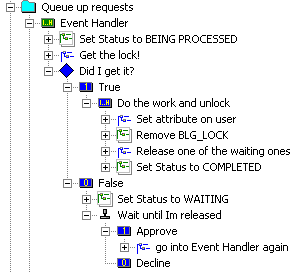 When a request enters the request handler, its status is first set to “BEING PROCESSED”. This is useful information for end users. If they request something manually via Web UI which results in creation of an instance of MX_ASYNC_REQUEST and that request is then sent into a request handler you can build a UI that simply displays the request object to the end user so that they can see in which status the request currently is. In this example we have only 3 statuses: BEING PROCESSED, WAITING and COMPLETED. In a more complex scenario that is closer to real life we’d probably also have WAITING FOR APPROVAL, FAILED, DECLINED and so forth. After setting the status comes the central task of this exercise: Get the lock! I’ll have to explain that later. If the request got the lock, the attribute BLG_LOCK is written (I added it to entrytype MX_ASYNC_REQUEST for this post) so that the following conditional task can easily check whether to wait (in case we did not get the lock) or to continue (otherwise).

In case we got the lock we simply continue. In case we don’t get the lock, we need to go into some kind of “waiting state” until the lock is released. In SAP NetWeaver Identity Management, this can be implemented by an approval task. This is exactly what we do here. If the conditional Did I get it? returns false we set the status to WAITING and go into an approval task which halts execution of this particular audit.

On the other hand the lock holder must release the lock when done. This is done in the task “Release one of the waiting ones”. If there are waiting tasks one of them will be selected and be sent into the request handler again so that another item will get the lock.

So much about the big picture. Now it is time to go into the details.

How does the locking work?

In order to answer this question let’s look into the task “Get the lock!”. It only executes the below script:

mskey is the mskey of the request being processed and parenttaskid is the task id of the “Event Handler” task. The crucial point is the SQL statement executed. Here it is again in a more readable form:

In my Identity Center the Event Handler has id 297 and the mskey of a request could be 1080. What does this statement do? Let’s recap what we want to do. We want to avoid that two requests are processed which will modify the same object. The object being modifed is pointed to by the request’s attribute MX_ASYNC_MSKEYVALUE. The first part of the query checks whether there are other requests currently worked on by the request handler which have the same MX_ASYNC_MSKEYVALUE as the given request. The second part checks whether those requests have the attribute BLG_LOCK set. Translated into human language this means “Is there someone editing the same object and has this someone the lock?” Why do we need the lookup in the provisioning queue (table mxp_provision)? Why can’t simply the lock holder get the BLG_LOCK attribute? The reason is safety. During request processing something might fail and the request handler stops processing but does not remove the BLG_LOCK. Then no request would ever be executed until someone manually handles this. Our check not only takes into consideration that the BLG_LOCK is set but also whether the request is still in the request handler and if it is not then it cannot block other requests and someone else can get the lock.

Another good question is why there cannot be two requests which enter the above script at the same time. The answer is simple: Jobs are executed sequentially. Even if there are two objects in the queue and waiting for execution of “Get the lock!” they’ll never be executed in parallel. This means that the first one will get the lock and the second one will have to wait.

Let’s get back to the script. The first one entering the script will now get the lock, BLG_LOCK will be written. For every following request the SQL query will return at one entry at least as long the first one is still being processed. In this case the second and all other following requests will run into the approval task and wait. This brings us to the next question

How is the lock released?

In a similar fashion we can now identify which requests are waiting in the approval task. We simply do a similar check: Look into the provisioning queue and filter out those requests that are waiting for an approval (when running into an approval, the runtime writes an MX_APPROVALS attribute to an entry, see also the first blog post). 302 is the id of the approval task in our example. If there are such requests, we pick the first one and approve it with the built-in function uIS_SetApproval.

In the approve branch of the approval task the request is simply sent into the request handler again and get a new chance to get the lock this time.

Some more comments about this:

I tested this. I wrote a job which kicks off 10 request more or less at the same time. All of them are going more or less simultaneously into the request handler. Please see an excerpt from the log: 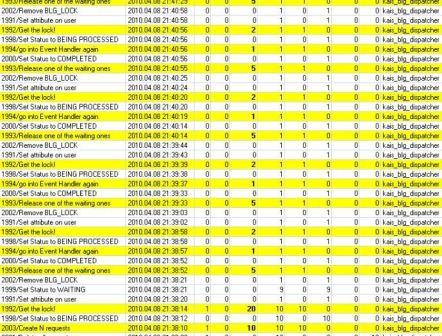 You can see at the bottom that 10 requests are created and then 2 log entries later 10 items to into the “Get the lock!” task. But only one execution of “Set attribute on user” and 9 go into the waiting state. And so on.

I’ve created a query for the DB how the attributes BLG_LOCK and BLG_REQ_STATUS evolve. See the result here: 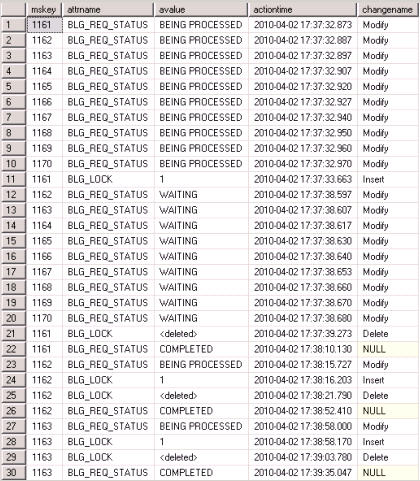 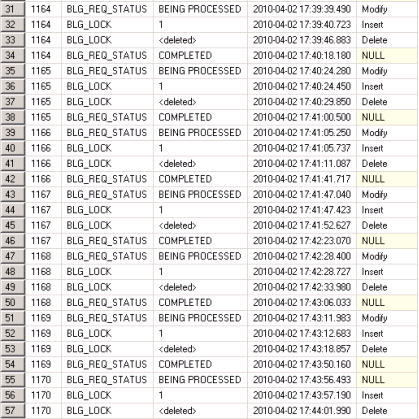 This allows you pretty well to follow what has happened. Please note the different mskeys in the first column.

Thanks for reading this! Stay tuned until the next post.

Former Member
April 22, 2010 at 8:06 am
I understood almost everything, but one thing is still unclear: is it possible to start request handler from SAP IDM GUI? Want I want to achieve:
administrator edit some attribute of user(for example, MX_ADDITIONAL_PHONE) and request is going to approvals before change is saved.

Kai Ullrich
Blog Post Author
May 1, 2010 at 6:26 am
Hi Ivan, I agree, the example is not well chosen. However, there is a point in using a request here. It allows you to store additional information like who requested and when, who approved and why so that the change can be more easily tracked compared to complicated lookups in mxp_audit and other tables.
But i agree the post doesn't outline well the advantages of a request handler.