Last week, SalesForce released the beta of its collaborative feature Chatter  to selected customers and partners. As co-project lead for Apache ESME, I watched the release presentations to see how this technology was being used in a SAAS environment.   Like many in IT, I’ve followed the development of on-demand software and not only have I developed on cloud-based platforms but I’ve also integrated such platforms into on-premise environments. During the presentations about Chatter however, I had an epiphany regarding the power of such platforms.  I thought abut how much time / effort it would take to provide an innovation (such as ESME) to existing on-premise customers. I admit I was envious.

Salesforce provides a SAAS-based development environment (Force.com) and since Chatter is an integral part of this platform, developers using this environment had this functionality available for their customers with limited integration work. Compare this to developers who develop software for various on-premise customers. For such customers, the necessity of deploying such new core functionality across all layers takes a lot longer. This ease and speed of deployment means that such innovations are much more rapidly available to end-users of SAAS systems.

NOTE: On-demand systems also have a variety of problems associated with them. There are other blogs that discuss such issues.

Although SAP has a wide variety of on-demand innovations (BByD, StreamWork, Gravity, etc.) their main focus is still on on-premise – also because of the large existing customer base – many of which are still on older legacy systems. For such customers, a stable core is critical. Despite the associated demand for stability (users don’t want to continually implement upgrade projects) , there has been criticism recently from analysts and other pundits that SAP has lost its mojo and isn’t innovative.  If you look at the various developments that occur at the edges (SAPLabs, etc.), you’ll find, however, that innovation is there but hasn’t moved to the ERP core as rapidly as some have desired.

In my opinion, SAP’s treasure chest is the immense process-related knowledge / experience that is stored in these back-end systems and it is this foundation that differentiates SAP from the competitors.  SalesForce might not have the “baggage” of existing on-premise customers but they also don’t have the experience that is based on the long-term interaction with such customers. Many of the SAAS newcomers might have a technological advantage (ease of deployment, etc.)  that comes from being a pure on-demand platform, however, the broad base of knowledge in a wide variety of industries isn’t present – yet.

The $10,000 question is how do you combine this immense on-premise process knowledge to the on-demand platforms with their intrinsic innovative speed / potential.   The easiest answer is to open up APIs on the on-premise systems for use in on-demand environments.  The question is which APIs do you provide? In the case of SAP, would this be Enterprise Services? Something simpler – perhaps REST-based?  Although there are certain restrictions to such access – many of which are related to fundamental Corporate IT issues (security, identity management, etc.), the technology to make such APIs available to on-demand environments isn’t a problem.  These APIs have existed for a while – what is missing is the SAAS offering from SAP to take advantage of these services.

The following diagram provides my interpretation of the current situation. 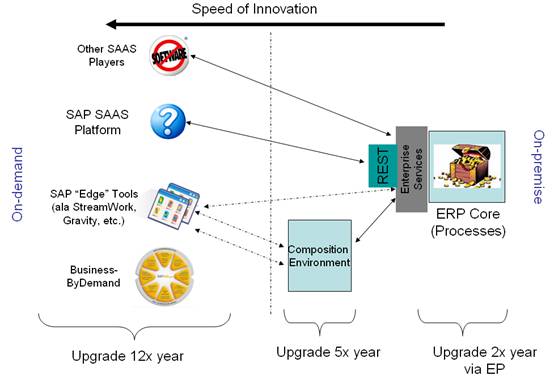 Note: The number of actual upgrades is probably different in each environment but I wanted to give a general feeling for the distinctions regarding such upgrades.

There is no single answer to this dilemma associated with demonstrating innovation and stability. The situation is complicated by the fact that different customer types place a different emphasis on which characteristic is more important.   I also do not have the solution but asking the questions is sure fun.

Thanks for another insightful blog. I recently worked on a project which required integration between SFDC and SAP ERP. While there are limitations in what you can achieve with Force.com, especially in case of a full-blown internet-focused mobile device supported e-commerce website, the apparent lower TCO and ease of use makes FDC a very viable candidate to be used for most of custom development scenarios. So the question that comes to my mind is: while SAP has a SaaS strategy, what about a PaaS strategy?

It has been a while since SAP got on the Application Development/Integration Platform bandwagon and it is about time that SAP looked hard at how the SaaS model impacts software development platforms.

In the platform space, I believe Azure and FDC are clearly challenging NetWeaver's future market. It would be good to know what SAP thinks of NetWeaver PaaS.