What Is New in ABAP Language, ABAP Workbench, and Enhancement Framework With SAP NetWeaver 7.0 EhP2

In this weblog I will present the new ABAP Language features, enhancements that we think make an already strong language even better. These include the following:

Let me now present you the new features and the problems they solve in some more detail.

In principle type f was not so bad for business programming insofar as it had a large range. Unfortunately it calculated in binary mode and sometimes this could lead to inappropriate, that is, incorrect results:

For example let us have a look at the following calculation:

The new decfloat (“decimal floating point number”) data type combines the advantages of both data types f and p while avoiding their respective drawbacks. It calculates as exactly as p on a larger range than f. It comes two you in two flavors:

It is based on the standard IEEE-754r.

You’ll probably want to know when to use this new data type and under which conditions you could still use the classic data types: To sum up the situation as it is with the new decfloat data type, let me just say: If operands and result of a calculation are whole number and the domain of p is not sufficient, use decfloat. The same applies to situations in which you need a fixed number of decimal places and the domain of p is not sufficient. In general, f is no longer recommended for business calculations. If you still want to use type f you should use the new keyword EXACT that forces an exception if the rounding leads to an incorrect result as I show in the example.

Before SAP NetWeaver Enhancement Package 2 you had only one (primary) key for an internal table which could be either unique or non-unique.

Optimizing the key by choosing a SORTED and or HASHED key speeded up only one access path. For all other ways to access the data from an internal table that used other criteria than those specified in the primary key you had only the standard access, which meant a full table scan. Unfortunately such a full table scan could be terribly slow: The time needed for such an access increased linearly with the number of rows as shown in the figure: 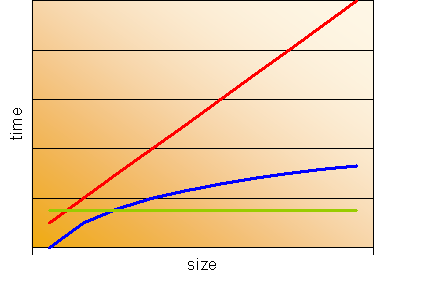 In contrast to reading data from the database there is no optimizer which chooses the best key for a particular search operation, but you have to define yourself in the relevant statement (LOOP, READ …) which key should be used by the system.

Of course, every secondary key has to be created and updated by the system. To keep the update costs low, all non-unique secondary keys have a so-called lazy update behavior. This means the secondary index is only updated when the next access that reads data is performed. In contrast, unique secondary keys are updated each time the table is changed.

This means for you that you should be restrictive in using secondary unique keys. In general, as already mentioned each secondary key needs memory and has its creation and update costs. Given this, it is a good rule to use secondary indexes for tables that are seldom updated and often read. 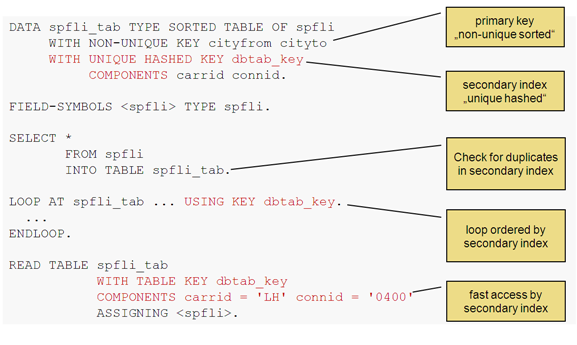 All these restrictions meant for you as a developer that your code got more and more complex and unreadable because you needed to use auxiliary variables.

In general, expressions can be used as operands

You can make your code leaner and more elegant by using “in-place” expressions.

Let us have a look at some examples that show you to which large extent the new expressions in ABAP make your life easier: 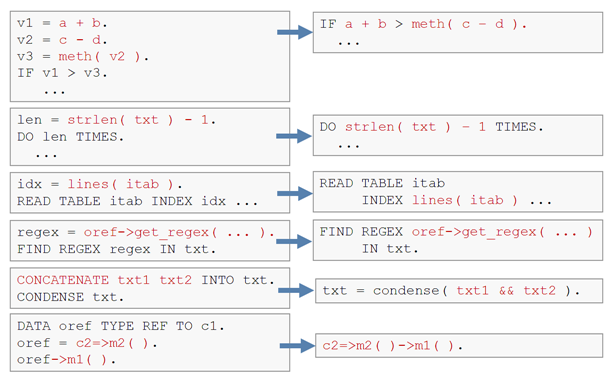 Before SAP NetWeaver Enhancement Package 2 string processing in ABAP meant a lot of work, you could even say it was to some extent quite painful. Surely, there were some basic statements like

And a few embedded functions such as

You had access to a substring by offset and length

On the whole you could say, string processing was possible, but it was no fun.

With SAP NetWeaver Enhancement Package 2 you have quite a lot of options to comfortably and efficiently process strings in ABAP. There is a new operator for concatenation (operator &&), and there are a great deal of new embedded string functions like distance, condense, concat_lines_of, escape, find, find_end, find_any_of, find_any_not_of, insert, repeat, replace, reverse, segment, shift_left, shift_right, substring, substring_after substring_from, substring_before, substring_to, to_upper, to_lower, to_mixed, from_mixed, translate. There are also new predicate functions for strings such as 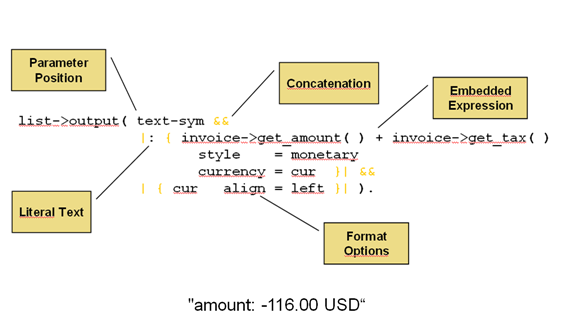 You can resume the exception at the position where it was raised if a number of conditions are fulfilled:

Using resumable exceptions lets you, for example, raise an exception and just write an entry in a log file in case something goes wrong. In the example in the next figure we repair the error and resume processing after the exception. 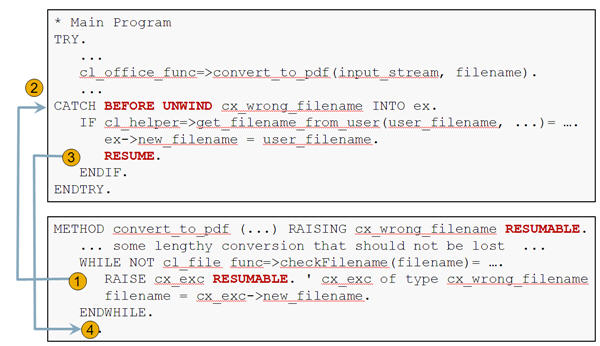 What is New With SAP NetWeaver Enhancement Package 2

As of SAP NetWeaver 7.00 there was a limited code completion that was mainly restricted to key words.

In the Class Builder you could only work in the classic form-based mode. It was not possible to see the whole code of a class, that is the code of all methods, on one page. The next figure shows you what was possible before SAP NetWeaver Enhancement Package 2. 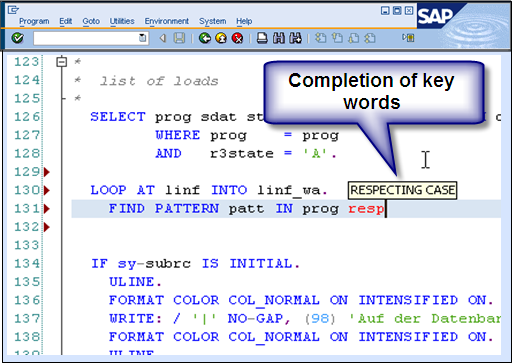 EHP2 brings you a code completion capability that is similar to what you may have encountered in state-of-the-art editors of other programming languages.

The example in the next figure shows you the code completion for a function module: 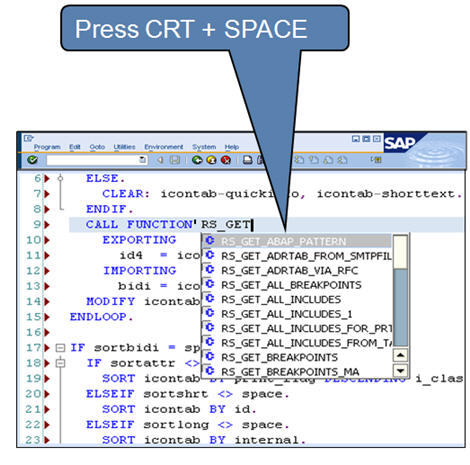 With the new source-code based editing capability in the Class Builder you can toggle between the classic form-based view and a new code-based view: 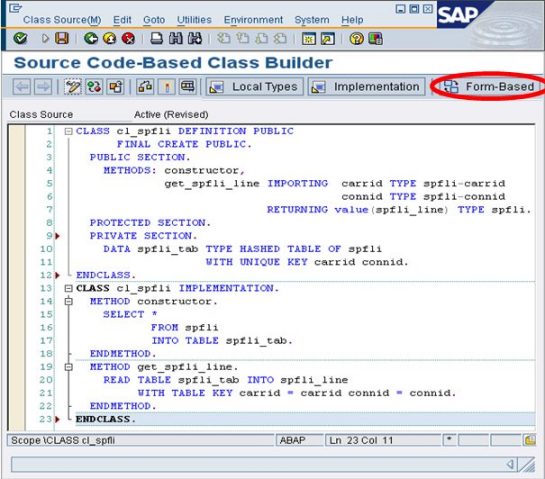 And Even More Features in SAP NetWeaver Enhancement Package 2

There are a lot more new features and enhancements in theABAP language in EHP2. I will just mention a few of them here.

You can now use a dynamic WHERE clause for internal tables. This way you can avoid the expensive dynamic creation of programs. The syntax for those dynamic where clauses is just the same as what you are used to in Open SQL.

There is now a RETRY-Statement for exceptions. If this statement is processed in the CATCH block of an exception the whole TRY block is processed again.

With the new UML functionality you can easily present class diagrams (function modules are shown as classes). The diagrams reflect inheritance, interface composition, dependencies, friendship, exceptions, and events. And the whole is configurable. This means you can choose which detail level you want to see from a lightweight diagram to a full blown view with all details. 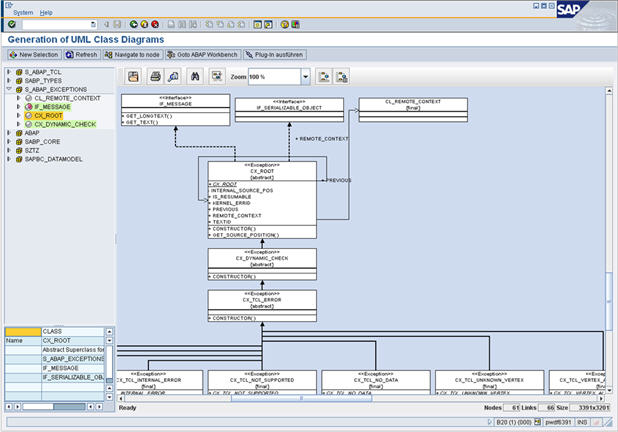 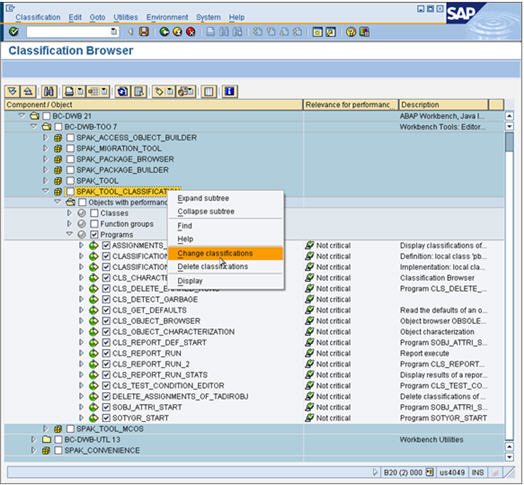 And there are many more features I can only mention here in this weblog:

I hope this weblog has convinced you that SAP continues to invest heavily in ABAP. You probably have some ideas about