Performance is one such parameter which has not got its due attention. Having worked for Performance on SAP CRM while development, i sincerely feel that there is a wide improvement possible.

SAP CRM with its new Web UI has gained majorly on the usability. Customers are convinced with the product they invested in, but sometimes there is a huge noise created on Performance of SAP CRM. Performance degradation can be because of variety of reasons. Some major ones are mentioned below.

Most of the Customers have many legacy systems and the vision is to have one single SAP CRM system which will replace the need for multiple systems and thus also reduce the cost of maintenance apart from giving the 360 degree view for which SAP CRM is famous for.

In the event of achieving the goal many requirements becomes performance overhead. At the time of designing, the technical details are not thought in detail but while doing the actual implementation, performance aspect has to be thought from day 1. Performance is also a parameter of quality and hence it should not be made a one time event rather should be a continuous process.

If the process is not institutionalized then during the time of stress testing there may be surprises which would hamper the quality of the Product.

It should be kept in mind that the implementing team should be guided on the performance aspects of the System well before in advance so as to have successful implementations.

There are few transaction through which Performance can be measured. Traces can be taken and then analyzed. Few such transactions are STAD, ST05.

ST05 Screen below – ST05 is used to take the SQL trace which generally helps in analyzing the SQL queries or the call to DB from the UI layer. 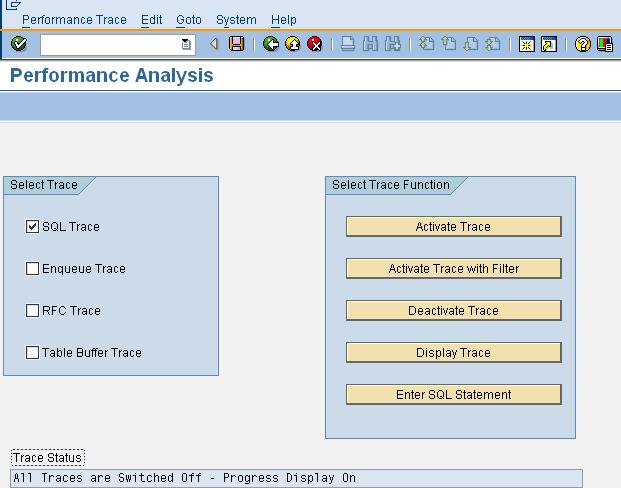 STAD Screen is shown below – STAD is generally used to take the detail measurement of the programs that runs during a process and also gives the clear picture of memory consumption and more such details. If Performance parameters are not given due attention, then it may have serious repercussions. Proactive approach is much better then the reactive ones in this case.