SAP Project Management: Path to Hero or Point of Failure?

About 10 years ago I decided to leave the road from being an SAP consultant.  I found an opening at washingtonpost.com for an SAP project manager that was 18 miles from my house.  I didn’t think anything of it – I interviewed, applied and took the position.  Truly, the only thing going for me at the time regarding project management was my AcceleratedSAP certification and FI/CO certification and PS experience.  I had never even been a project manager.

My first project as project manager I was able to succeed due to the following:

Additionally, I diligently met the ASAP deliverables at each phase:

We even had a setback due to 9/11, but we were able to successfully work through it.  I had one negative lesson learned – the customer manager was expecting a change to the bar code scanner that I said wasn’t in scope.  Did we have a scope document?  Hmm…

I decided I didn’t want to be a project manager; I felt I didn’t get the political support needed from management at the time.

A few years later, my manager at the time told me he wanted all of us functional analysts to take the PMP (Project Management Professional) exam.  Both my office-mate at the time and I decided to take it.  It turns out I had very little knowledge of formal project management.  While I have experience in SAP project systems and understanding Microsoft Project, I realized I had a great deal to learn.  I remember thinking “an SAP PS network is something I’m just never going to understand”.

Then, as I was studying, I finally learned that networks are not an SAP term, but really a way to manage the project activities.  S-S, S-F, F-F, F-S – those didn’t come from SAP!

Fortunately, after hard study, I passed the PMP exam – you need stamina and endurance to take a 200 multiple choice question test!!  Then, the interesting part came when I decided to apply the concepts I learned to the projects I was involved in at the time.

We had 2 completing projects at the time – I was on a ramp-up upgrade project for an industry solution we were using.   First, we met with the project sponsor and asked him his expectations.  Then we created a one page project charter, which the sponsor signed.  I framed and gave it to him, so he would remember what this project was about.  What is a project charter?  It is an “approval to proceed”.  Solution Manager has project charter templates, and good ones, but we decided not to use it and keep it simple.  My favorite project charter format is from Rita Mulcahy, rmcproject.com, link http://www.informit.com/articles/article.aspx?p=1400865 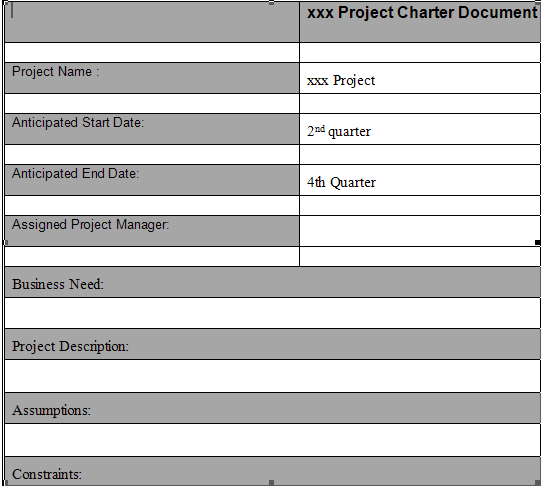 We held a kick-off meeting and explained up front that this upgrade, while of great benefit, would require some system downtime; a master data freeze; and at some point a development freeze.  We explained the upgrade phases and what was expected at each.

Another example can be found at http://www.docstoc.com/docs/13291351/Project-Management-Templates

During the “realization” phase, we developed a responsibility assignment matrix (RAM) to assign and manage resources.  Here is an example:

Each week, we had a standing status meeting, with notes and action items.  For that we (finally) used the Solution Manager template provided.  The issues list was reviewed.  We measured % completed by the “RAM”.

Meanwhile, we lost our key FI/CO resource for the upgrade and I had to step in and take her place; a key part of this upgrade included Finance.  I felt we were never going to make it.  Fortunately SAP came to the rescue and I was able to spend 30 minutes with a key SAP developer who set us on a simpler upgrade/migration path.

The other competing project failed; many people quit or lost their jobs.  An independent party came in and did an assessment of this failed project:
1)    lack of program management
2)    lack of risk management
3)    lack of formal project training for the project manager

If you had asked me 6 months before we went live who was going to succeed, I would’ve said the other project as they had a flashy, articulate “project manager”.  He was well-liked.  He had a beautiful blueprint document that was held up as a standard for all of us to use.

A key takeway is a MS Project Plan does not equal Project Planning; an MS project plan is nothing more than a Gantt chart for management’s review.  My office mate, who also passed the PMP exam, and I felt we had a better understanding of the SAP Project Systems module as well.

Three months after our successful upgrade ramp-up project, SAP came in and our account rep told us we were the first to successfully go live on this industry solution/version; the customer looked at me and said “thanks to your hard work…”.  It was a team effort, but at that brief moment, I got to be a hero.

SAP Proj Mgmt is as much (or more) an art as it is a science. And there is hardly an "average" SAP PM - either this person is a hero, or a zero - rarely is some one in between these extremes. I have seen it make and break careers.

Strictly personally, I am not a fan of PMP certification- I don't think that makes me a better PM. But I have no issues with any one else wanting to do that. This is an issue I have with all certifications - not just PMP.

Some how, throughout my career, I have always worked in huge big projects - right from the time I was a developer, to now when I do the management. In these gigs - my core principle is that "People fail more times than processes fail". So, barring few exceptions, I insist that my projects establish and closely follow an established process. It is very boring for a lot of my team members, but I think it is a fair trade for reducing risk of failure.

Tammy Powlas
Blog Post Author
April 2, 2010 at 10:39 pm
Hi Vijay,
Thank you for the excellent feedback.  Regarding the PMP certification, for me, it was a motivator to obtain more formal project management education.

Additionally (similar to a Certified Public Accountant) you have to obtain 60 credit hours of training/meetings/etc. over a certain period.  That forces you to get trained (or retrained again). I realized that I was behind on my credits so I am back "in school" to keep my certification.

On the job, I think we sometimes forget to follow an established process.  The Project Management Institute standards remind me to do this, especially since I don't always do project management on a daily basis.

Thanks again for the feedback and responding.
Tammy

Former Member
April 5, 2010 at 1:55 pm
Tammy,
Congrats on a great blog! Managing SAP projects is indeed a challenging job, especially when you are playing dual-role of a functional consultant and a project manager. In my opinion, the contents of PMBOK are very useful. The processes and templates help you control the processes and risks effectively.

Many people start their career as SAP functional/ technical consultants and then step up as project managers. To someone without any prior experience or training in Project management,it provides a very good understanding. Once you have internalized the learnings, it becomes a second nature to you and you proactively start managing the factors that are likely to impact your project.

Its interesting to note that the new ASAP 7.0 methodology launched recently, has derived heavily from the PMBOK. Its nice to know that the new accelerators and templates are now in line with the PMI standards.

I too have noticed that people fail more often than processes. But in my experience, the right processes in place help you in getting an 'early warning' about impending disasters!! It makes all the difference between a hero and a zero
🙂

This blog is obviously old but was recently re tweeted, hence the delayed response.

Really enjoyed reading this. As someone who has recently entered Project Management it's nice to see a success story by 'keeping it simple', and having the key processes in place will certainly help to ensure the project goes well.

Your experience obviously went something like 'SAP > Project Management' - mine is quite the opposite, from a completely non technical/IT background (in-house Resourcing for a SAP Partner) in to Project Management.

Your route obviously means deeper solution knowledge of the project you are managing. Any tips for non SAP/Tech PMs managing SAP projects?

I hope you see from the above you don't need to know SAP necessarily to manage projects.

For both non-SAP (and even SAP) project managers I'd say communication is key and people skills certainly help.

Follow the Project Management Institute (PMBOK) steps and for sure you are on the way to success.  Simply having a signed project charter, framed, where the sponsor sees the project is very helpful.