3 1 7,456
*Before you start:* Please read the “Before you start” section in this blog first: [Single Transaction Analysis (ST12) – getting started | Single Transaction Analysis (ST12) – getting started] We’ll use the same tracing options as described in the above mentioned blog. Therefore the explanation of defining the measurement scope is skipped here. Note that the so called “User Trace Scenario” which is for a similar scenario is not discussed here since it is obsolete. The “Tasks and HTTP Scenario” is like an extended version of the “User Trace Scenario”. *ST12 – The Tasks and HTTP Scenario:*Please note the warning if you set up a trace for your own user. Depending on the task type (e.g. in case of “D DIA” or “*any” a trace request will be used for ST12 itself when you close the popup). Other actions you are performing in the system while tracing might use trace requests as well. Additionally ST12 tracing activities (namespaces /SSF/ and /SSA/) will appear in the performance trace (SQL RFC). Please use the “Current mode” scenario which is described in the above mentioned blog, or logon as another user to work in ST12, if this is possible. However it is possible to use this scenario for your own user, just keep in mind the things mentioned here.

If you click “Start trace” (Nr. 5 in figure 1) you will see the following information in the small table that is just above this button.

You can use the refresh icon (see nr. 6 in figure 1) to update the figures in this table while your trace is running.

*Stopping and collecting the traces*

After starting the traces the text of this button (Nr. 5 in figure 1) changes to “End traces & Collect”. Press this button if you want to stop the measurement. In case no traces have been recorded there will just be a message at the bottom of the GUI saying “No traces found for collection”. Reasons could be that there was no request that matches the user you specified or the trace has been setup on the local application server only and the requests arrived at a different server. If traces have been recorded they are presented in a popup. All servers that have been specified for the trace recording (Nr.2 in figure 1) will be checked for trace files.

What you see here is the ABAP trace files taken with SE30 which was “remote controlled” by ST12 (ST12 calls SE30 and ST05 under the covers).

On this popup, mark all traces (Nr. 1 in figure 2), or hold down the SHIFT key to mark several ones, and import them (Nr. 2 in figure 2). The traces will be imported in the database then. You will see the traces in the table at the right bottom of the main screen of ST12 (as described in this blog: Single Transaction Analysis (ST12) – getting started (Single Transaction Analysis (ST12) – getting started) ). For a better overview you can use the list button which is just above this table in the main screen (as described here: ST12 – storing additional information and managing traces (ST12 – storing additional information and managing traces) ). In this list you will see a column named “Duration” which shows you quickly the recorded runtime in the collected traces.

*Some background information on trace recording* This section describes what will be traced with this scenario. For the given username and task types on the given server(s) a new ABAP trace will be started for each transaction / LUW (logical unit of work) . That is from the first roll in of a transaction while the trace is active. The ABAP trace will be stopped when this transaction is finished. The performance trace (e.g. SQL trace), on the other hand will be started immediately for all requests for the given user, task type and server(s). It will be stopped when the trace in ST12 is switched off. The following figure illustrates this: 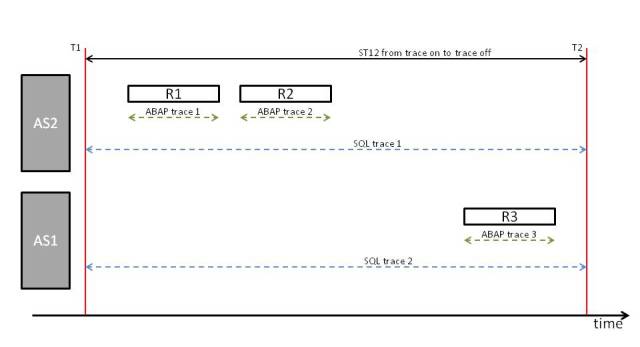