One Million Acts of Green Part 1: The Power of the Human Network

Canada welcomed the world recently when we hosted the 2010 Olympics Winter Games in British Columbia, a source of great pride for Canadians.  Unfortunately, the truckloads of snow rumbling down the mountain to the ski hills also drew some unwanted attention.  Although it’s not unusual for Vancouver to experience mild winter conditions, some people saw this as a sign of global warming.  Climate change and sustainability at large get a lot of media air time, which is a good thing if it motivates us to take positive action.

Back in 2008, the folks at Cisco had a big idea.  They set out to rally a nation around the premise that every person could make a small difference in the health of the planet, and if every person made their small contribution, together we could all make a big difference.   This is the power of what Cisco calls “the Human Network Effect“.

Cisco launched a campaign called One Million Acts of Green (OMAoG) in October of 2008 in conjunction with CBC television, and in particular George Stroumboulopoulos, the enigmatic host of The Hour.

In its most basic form, One Million Acts of Green was a simple call to action:  log into the Web site and record your “act of green” – something positive you were doing or pledging to do on behalf of the planet.  An act of green could be as simple as drinking tap water instead of bottled, taking the stairs or donating old clothing.  Each act of green was awarded an environmental score, meaning that you could immediately see the impact of your particular contribution, as well as the cumulative effect of everyone’s efforts, in terms of trees saved or cars taken off the road. 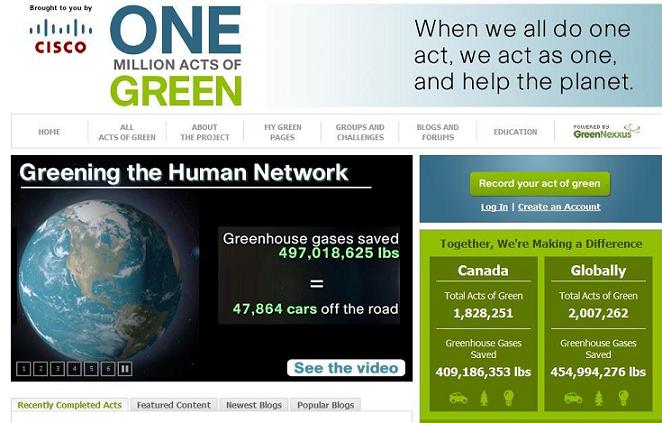 Within 3 months, the program had exceeded the initial target of one million acts of green, and by July 2009, Canadians had logged 1.8 million individual acts of green, and saved 106 million kg of greenhouse gases.  Then the site went global at http://onemillionactsofgreen.com/.

Canadian Ray Zahab, founder of Impossible2Possible (I2P), recently ran 7,500 km across the Sahara Desert to raise awareness for the water crisis in northern Africa.  His journey was chronicled in Running the Sahara, a documentary narrated by Matt Damon.  Ray talks about the ripple effect of One Million Acts of Green here.

And ultimately, it all began with the power of one person in particular:  Willa Black, Cisco’s VP of Corporate Affairs.  Willa conceived of One Million Acts of Green along with her team, and it was her personal power, influence and perseverance that brought the program to life.

For me, this is also a story of the power of technology to enable people to do something significant.  Through technology, Cisco created a movement that inspired a country, and now they’ve set their sights on the world.  The new goal:  1 BILLION Acts of Green globally.  Perhaps you’ll decide to become a part of it.  http://onemillionactsofgreen.com/  You can also find them on Twitter (@1M_ActsOfGreen) and Facebook.

To be sure, Cisco did not embark on this program for purely altruistic reasons.  This was a marketing campaign, a highly successful one which will be the subject of “One Million Acts of Green Part 2:  A Social Media Case Study“.

But for most people One Million Acts of Green was an opportunity to learn, share, make a difference, and become part of something meaningful.

Marilyn Pratt
March 12, 2010 at 1:33 pm
I love the connection made here between the Olympics being held in Canada and the Sustainability topic.  To me, living a bit south of you, Canada has been a role model for many exemplary types of behavior.  I did my initial ABAP certification training and testing in Toronto back in 1997 and was exceedingly impressed with local people's social and environmental   values as I experienced them living for a few months in Ontario.
I was also truly pleased to read this week about my Canadian SAP employee colleagues commuting habits in this piece called:   Canada Beats US at Olympic Commuting .  I also love it that our employee communities share their own "acts of green" and I am so excited to know that  The return of the "want a free water bottle offer" for Sapphire US / ASUG09  "Take back the Tap" campaign (against the use of plastic water bottles) is now coming to our offices in Newtown Square.  By learning from each other we can enhance our abilities to "do our part" and in viral manner spread the green.  Thanks for taking the time to surface all this content here.

Sorry all!  I'm moving my old blogs to the right space in the new SCN platform - I see they reposted as "new".