Before we start we should talk about some terms first.

A tool or function provided by the DBMS (Database Management System) that makes an execution plan visible.

A parsed, optimized, compiled and executable SQL statement stored in the so-called SQL cache of the database. Using the explain plan the SQL execution flow of this plan can be made visible textually or graphically. The execution plan shows the sequence of the detailed steps that are necessary to execute an SQL statement.

For the various databases that are supported by SAP there are often different names used. The following matrix should help you to get an overview:

We will use the SAP names here.

Within SAP you can find the explain plan in two important transactions: ST05 and ST04.

It is important to understand what you can see in these execution plans. For the same SQL statement the content of the execution plan might be different in these 2 transactions depending on the database platform.

We have to distinguish between an “estimated plan” and the “actual plan”. The main difference between these two is that they tell you how a statement will (probably) be executed, or how a statement actually was executed.

The following matrix shows what type of execution plan you can see in which transaction for the different databases:

Getting the execution plan with ST05

Since ST04 is database dependent you will find the explain plan in various places within the tool. This is not discussed further here. We will finish with the description of how you can get an execution plan in ST05:

Once you have created a trace with ST05 you can obtain the execution plan with the explain plan function in the trace list or the statement summary like it is shown in figure 1 with numbers 1 and 2.

Note: In the trace list the explain function (number 1 in figure 1) is only possible on lines where the operation (Op. column) shows OPEN or REOPEN. On some databases e.g. DB2 there are more valid positions (e.g. PREPARE, DECLARE)

Another option in ST05 is to enter a SQL Statement (Button “Enter SQL Statement” in the main screen in ST05) manually. If you want to use this function you have to use native SQL, which is database dependent. This option is not discussed here but might be included in future database specific blogs. 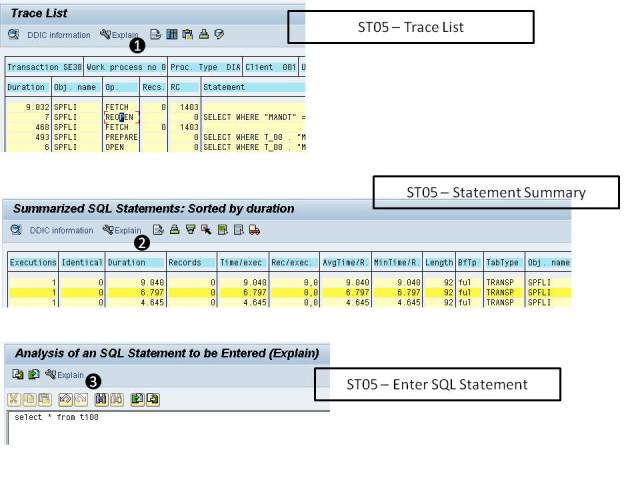 Generally you can get the following information in the execution plan:

Former Member
March 4, 2010 at 2:43 pm
Hermann , Thanks for sharing this information . But i have question you - How do I say the cost of the data selection is high ? , I have seen some cases where the INDEX search's cost is more than the actual data selection cost due to the wrong selection condition fields. Still in many cases I could not able to determine whether the cost is actually high or low or it okay.

Any standard way to determine this ?
Will DBA's only have more knowledge on this ?

we often hear people saying that a SQL is "expensive" sometimes because the estimated costs are high. If or how this costs are derived is database dependent. On ORACLE e.g. the cost expresses the estimated amount of work to be done to execute the SQL. So the estimated nr. of physical I/Os and the type of the I/Os as well as the estimated CPU cycles needed are taken into account. However, all these estimations are based on the statistics. So estimated costs are just an assumption. What matters is the response time, istn't it? E.g. how long does it take to read one row?

To answer you question: No, i'm not aware of any standard KPIs reg. cost. I suggest to focus on response time.

Former Member
March 5, 2010 at 10:07 am
Thanks Hermann , that make sense and that's what i do basically after reviewing the explain SQL query.

Thanks for your initiation at this topic.

If the CPU cost is not useful, why SAP is displaying when you click on EXplain SQL.

I think some meaning would be there for this CPU cost to evaluate query performance.

i didn't mean it is not useful. One can use the cost estimation to understand why the optimizer prefers something over something else however than the details of the cost estimation process has to be known as well. The cost should reflect the time as well but this doesn't work always since it depends on several things (satistics, assumptions, ...). I use the cost sometimes when i try to understand optimizer decissions. But talking about query performance i start with time, not with cost. The estimated costs are not necessarily the real costs. You can see the real costs after execution as time or with database specific monitors (e.g. buffer gets,...)

What is the difference between the Execution plan cost and Open statement duration. I have observed that when I modify something in the Select statment in abap program, my execution plan remains same with values in terms of estimate cost, number or rows and I/O cost but duration of the OPEN statement keep on changing. It's very difficult to say  now that performance of program is improved or not based on the explain plain analysis.

Please help me in understanding the facts about the OPEN statement duration. On which parameters this duration varies if execution plan remain same and where we do we can do analysis of thos parameters.

it depends  on the DB platform. On some platforms the OPEN includes the first fetch. Then it would most likely be influenced by caching. You need to look in the shared cursor cache and the KPIs there to find the reason for the time diff.

Thanks for your reply. I have checked the details as you said but still not able to make clear picture on the OPEN statement duration.

Secondly I have tried to check the expensive SQL statments and under SQL cache, I found the SQL query but it's showing Buffer gets/Row processed as zero and Buffer quality as 98.65% but in opposite to this my Open statement duration in ST05 is still huge for that query.

lot's of questions and i think this is not the correct place to diskus them.

If you send me an email with your analysis i can comment on that.

Could you please give me your email id .

send me a direct message in scn with your email please. (There are 10 Manish Garg registered in SCN... 😉

Very Well  explained  the basic terminologies about the database!!!