Before I answer the question “What’s so special about March 24th?”, I’ll ask another question.

Do you know Ada Lovelace?

Probably not, since she lived some 160 years ago.  In fact, I had never heard of Ada Lovelace until March 24, 2009 – the first international Ada Lovelace Day.  That’s when Marilyn Pratt enlightened me with her Ada Lovelace Day and the SAP Community Network.

So who was she?  THE WORLD’S FIRST COMPUTER PROGRAMMER, that’s who!  Coincidentally, Ada Lovelace (1815 – 1852) was also the daughter of famous poet Lord Byron, although sadly she never knew her father.  You can learn more about Ada Lovelace on Wikipedia.

How incredible that a female mathematician living in the mid-1800’s is credited with writing the world’s first “computer” program!  This amazing woman and her accomplishments should be commemorated in the hopes that it will inspire and encourage other women in the technology field.

By now I’m sure you’ve guessed …

According to http://findingada.com/:  “Women’s contributions often go unacknowledged, their innovations seldom mentioned, their faces rarely recognised. We want you to tell the world about these unsung heroines, whatever they do. It doesn’t matter how new or old your blog is, what gender you are, what language you blog in, or what you normally blog about – everyone is invited.”

I’m not a “technical” woman, but I am a woman in the technology field, and I’d be honored to shine a spotlight on some special women this year.  That’s why I plan to celebrate Ada Lovelace Day by writing about some of SAP’s brightest and best.

I’ve made my pledge at http://findingada.com/ and will be publishing my blog here on the SAP Community Network.  Marilyn Pratt has offered to support others who wish to do the same right here.

Will you join us? 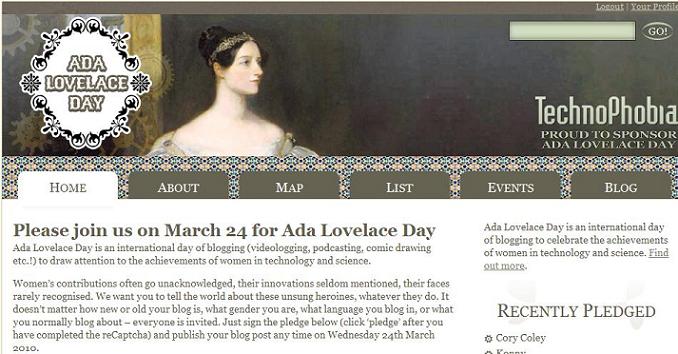 Cory Coley-Christakos
Blog Post Author
March 1, 2010 at 3:42 am
Marilyn Pratt has made it easy for you to participate in Ada Lovelace Day, even if you don't have your own blog.  Just add your recognition here:  http://wiki.sdn.sap.com/wiki/display/events/Ada+Lovelace+Day.

Marilyn Pratt
March 1, 2010 at 4:09 am
Thanks Corey so much for kicking this off! So excited that other colleagues are thinking this way.  I saw a few things in our community that made my day.
Ada Lovelace Day – recognize the women techies in your community by March 24 was created thinking how to encourage more folks to recognize women in technology.  And this wiki page was created to help people pledge and create easy, short testimonials to women in technology even if they don't have a formal blog here or in other environments.  Also, I would highly recommend commenting in both your blog and in Nalwen's about women to be highlighted.  I have provided a simple template in the wiki but it could also be part of the comments we track here:
To Create an Ada LoveLace Day Entry
1. answer the 3 questions below
2. Put a title on the page with your heroine's name and your name (for example: Sandy Kemsley by Marilyn Pratt )
3. Add wiki label adalovelace (by editing the label of your page)
4. Save
The questions:
Who is your Ada Lovelace Day inspiration? (Name)
Why is this person a role model?
What are some of the accomplishments of this heroine?
It would be great if others would take the pledge on the  findingada website and even better from my perspective to see folks highlighting not only historic women, but women here in our community or in our work community that we know and would like others to know more about.
And here's something else that gave me a huge smile last night. Forum moderator and SAP superstar Matt provides a mysterious and intriguing link in the forum:  My hero .

Former Member
March 1, 2010 at 4:41 am
It's always a challenge year after year to recognize people in response to a specific day, last year I recognized a great woman who is also part of this community - last year I wrote, http://fridaymorningreport.tv/2009/03/24/women-in-technology-i-admire/ which I followed shortly after with http://fridaymorningreport.tv/2009/08/20/women-speaking-and-whats-fair/

For 2010 how ever shall I I recognize this great woman again without repeating myself? Perhaps I should tell her personally and then write about another? This of course is one of the major problems I see with special days about special people - part of me thinks we should not wait for a single day to do this but rather do it often - maybe this year I will dedicate a portion of my upcoming 24 Hour Marathon to recognizing great women in technology?

In either case I will take the time to recognize the women of technology I admire most - who else will?

You raise a very good point - why do we wait for a special occasion?  Personally, I'll take advantage of any opportunity for a bit of celebration, and I love the "buzz" it creates.  But I'll take your thoughts to heart and remind myself to recognize deserving people more often.

Looking forward to the FMR marathon!