Alexander Dreiling recently published a Gravity – Collaborative Business Process Modelling and Application Development entitled “Gravity – Collaborative Business Process Modeling and Application Development” in which he describes the latest version of SAP’s Collaborative BPM tool – Gravity. New is that the tool can also be used for application development. Even more interesting is the fact that the processes can now be deployed in the cloud. This means that a cloud-based BPM runtime engine may be involved.

Note:  I have no idea how the tool functions internally, so I’m making an assumption. Although the presentation describes this as “application deployment in the cloud”, this also requires some sort of a process engine.

Take a look at the screenshot (at 6:47 during the screencam) below which shows deployment of the process model plus application components to the cloud. 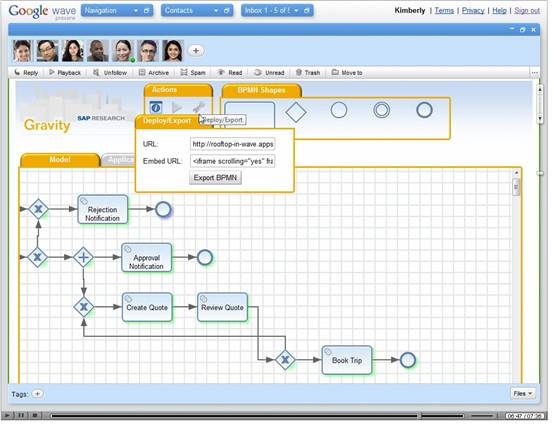 A cloud-based deployment model has a variety of serious / interesting ramifications:

Obviously, this version is still in an early development stage. Still, I’m excited to see that SAP is examining the cloud not only as an environment to design processes but also as a runtime environment. There are a variety of existing players in the same market. I’m curious to see how they respond.

Former Member
February 26, 2010 at 12:38 am
Hi, my name is Emily Brown. I'm from San Francisco California and am the owner of Emilia Ceramics, a great website with a large collection of italian ceramics and mexican ceramics. The inspiration behind Emilia Ceramics comes from the people I have met while living and traveling abroad – people who truly prioritize the enjoyment of family, friends, and good food. I believe this attention to life's simple pleasures is manifested in their colorful ceramics

Emily, let me say that it is comments like yours that prove the value of collaboration in this ecosystem.

I for one am glad Emily posted on your blog, because it prompted this idea:

Could ceramics be the key to connecting on premise to the cloud?

Martin English
February 28, 2010 at 10:56 pm
Jon, Emily,
The PM (Pot Making) module was developed at the SAP Research offices in Brisbane Australia.  Unfortunately, being based in the southern hemisphere, this gives rise to a subtle and little known side effect - when the PM module is installed in the northern hemisphere, you need to include counter rotation code to ensure it spins in the opposite direction (due the effect of being on the opposite side of the equator).

It is my belief that this single design flaw has been one of the major reasons for the slow uptake of both COTS and in-house developed Ceramics in the Enterprise.

I'm assuming that Emily was part of the PM development team - perhaps as a management consultant. If you read her initial comment "The inspiration behind Emilia Ceramics comes from the people I have met while living and traveling abroad". Although she doesn't mention her involvement in the project - (She's not only modest but is also a firm believer in upholding NDAs), I could see her influence in the originality and true innovative potential of the project.

Former Member
February 26, 2010 at 12:50 am
Great blog, Richard. Just yesterday, we were discussing BPM & the cloud internally, and I am taking the liberty of posting this on Yammer as well. It is indeed a topic of great interest and debate (expecially post Benioff's comments on SAP & the cloud)

I also think it is of critical importance.  For me, Gravity is one example of SAP's cloud efforts, many of which are ignored. I assume SAP is starting on the edges and then working it's way toward the core.

IMHO, BPM is an excellent choice for cloud-based deplyoment. More important, however, is the intergration of off-premise with apps behind the firewall.

Former Member
March 3, 2010 at 11:30 am
Thank you Jon Reed for clarifying where to find this discussion.  I was losing my mind trying to find the Ceramics SAP discussion.  I can think of 3 ceramic implementations at my house, but I'm not sure if they are related to SAP.  Possibly.  Or perhaps related to Oracle?

Marilyn Pratt
March 3, 2010 at 11:41 am
This is a fine kettle....err...ceramic pot of fish.  Now I can't delete the spam because of all the responses here.
More seriously, this comment raises a question about why anyone would masquerade as Emily and post on a cloud blog.
I'm assuming that Emily would be smarter than to try to market her wares to process experts and smart developers.  Emily, be warned.  Not very crafty to bait the audience here.

Richard Hirsch
Blog Post Author
March 3, 2010 at 7:44 pm
I checked the user's business card and the account was created and then the user immediately posted a blog comment - assuming it was random and I just got "lucky"

I thought it would more appropriate to try and humiliate the spammer and the content that was promoted than just delete the comment.

Former Member
March 4, 2010 at 8:04 am
My name is Emily Brown... the real Emily Brown. I do in fact sell ceramics... handmade, hand-painted pieces that are both beautiful and functional.  But I have to admit, their power is limited to tasks like serving salads and displaying bouquets of flowers... and can't help at all when it comes to cloud building.  I also have to admit that I have no idea what cloud building is and the number of times I've read and reread your very interesting blog has not helped me.  So I'm going to go back to selling ceramics.

I sincerely apologize that my (ahem, low budget) SEO company posted this... I promise to be more responsible and hold them to a higher standard of accountability in the future.  In the meantime, if any of you ever find a need for truly extraordinary ceramics, maybe we could discuss an SAP discount!

Thanks for your understanding --
Sincerely, the Real Emily Brown

Marilyn Pratt
March 4, 2010 at 11:31 am
Thanks Emily (the real Emily) for your courage in coming forward to apologize here to the author and the community.  Your SEO's behavior raises an interesting point about the quality of service we derive from service providers we engage with.  As you discovered you didn't get good value from yours.
And although you claim not to have learned much about cloud computing, I think you had a good lesson in SEO quality.  Good luck, and let the real comments resume and hoping that such distractions are indeed a "barely repeatable process" in the context of our community.

thanks Emily and the rest of you - it is great to stumble unexpectedly into something as entertaining as these blog comments. great.