As Enterprise Businesses grow, the overall data volume and data traffic between various systems in (or outside) the Enterprise landscape grows. As we move forward towards distributed yet integrated ERP architectures, integrations are becoming more data heavy; hence more and more requirements come to build more robust and scalable integration in order to operate various systems and operations seamlessly. Yet we need to build integration architectures such that the control mechanism of various distributed systems are coupled with proper logical integrity with vivid error handling, recovery point and monitoring facilities.

Our client is no exception. They have a vast distributed landscape containing various components of SAP NetWeaver suite namely –

Beside it has it’s mainframe based legacy systems like

As this project started to evolve our client’s Enterprise business system in 2005, all these systems were not data heavy. So the integrations were not dealing with such high volume.

However, in recent days, as client’s business grew and more and more operations are performed on SAP systems (migrating from legacy system) data flow between various systems has grown exponentially. So special care has been taken to put up a more robust design, so that we can handle high volume interfaces with higher performance; yet not loosing tightly coupled control mechanism end to end.

SAP XI/PI has a double stacked architecture where it has an ABAP based backbone engine. And on top of that it has the Integration Engine Java Runtime where the middleware mapping is done. Given in diagram 1 is the standard SAP XI architecture with its various components. The mapping programs are built in the Integration Builder: Repository or Enterprise Service Repository (ESR) and the configuration of the various end to end scenarios are done in Integration Builder: Directory or Configuration. At runtime the adapter engine which directly interacts with external systems and converts data to XI messages pushes data to the ABAP based Integration engine (IE). Integration Engine then allocates the messages in internal pipeline services to dispatch them to the Java Runtime. Java runtime holds the mapping program which maps the source to target structures. Target messages are then being dispatched back to IE to deliver back to target Communication Channel. 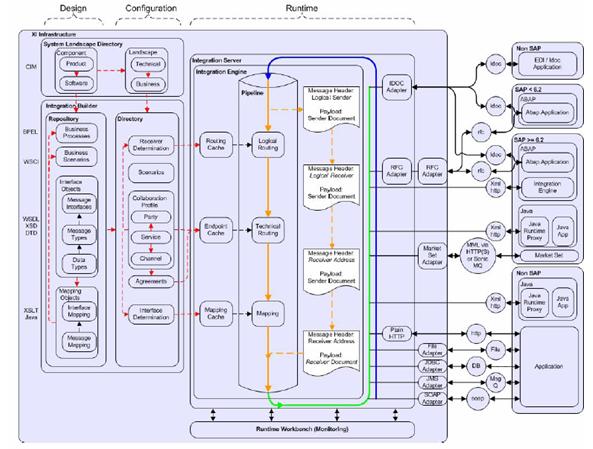 So in the end to end integration process, the message flows between the ABAP pipeline service queue as well as java runtime. For large volume persistent data flow file based integration is a very common scenario. Message flow in a FTP-XI-File scenario in a typical common architecture can be depicted as below:

In the scenario above, files are pushed/pulled from FTP server to various SAP systems like ECC, CRM via Network file system (NFS). In a typical XI architecture the files are read via FTP/File adapters and pulled into Integration engine of XI. Then the payload is pushed to Java runtime for mapping. In most of the file to file scenarios we find no transformation  of the payload. So this becomes a pass-though interface. Next the outgoing pipeline service (out queue) dispatches the message payload to inbound file adapter to write the file to NFS. The reverse direction data flow is similar where data are pushed from NFS to external FTP server via XI.

1. In a pass-through scenario where we need not to have a payload transformation, the mapping piece is redundant. This unnecessarily takes more performance overhead to send the payload to Java Runtime from ABAP stack and vice versa.

2. Even if we bypass the mapping piece by putting dummy entry in Interface Determination, there is still a major performance issue. Since the file adapter is reading the entire file, it tries to transform it into XI message payload. So no matter if we use mapping or not, the pipeline services are used for the heavy messages. The major issue with this architecture is:

3. On the other hand after the files are delivered to NFS, there is little control over the respective programs in SAP systems that are using the file. Because file adapter cannot control or trigger the target program directly from integration standpoint we lack the control to trigger the end process.

To meet this type of typical customer need where data volume cannot be reduced and middleware is used mostly as file transporter not file transformer, we proposed a new design.

The major challenges are:

The new architecture for high volume file-to-file integration is as follows:

Since the actual payload is not passed through the message queuing of XI, the scenario is virtually flexible for any type/size of payload. The actual throughput depends on the network bandwidth but not the middleware system. In our client, many scenarios that are handling multi-GB file move between systems are using this architecture.

Since the architecture is independent on the size of the payload, there is virtually no impact on the overall performance of the middleware even if we need to handle multiple multi-GB scenarios on the enterprise landscape.

This architecture not only acts as a file transporter, but also integrates the file processing end-to-end starting from source system to target system. Since the integration scenario is dealing with the metadata, that additional comm.-channel allows us to put better control mechanism in the target system beyond middleware reach. The trigger Idoc/inbound proxy not only helps kicking off the file processing subsequently, but also provides valuable error diagnostic in the Idoc / proxy message. This allows us to put better re-processing mechanism and recovery point.

In this project, there are number of legacy and distributed ERP system (as explained in section 1. We have got the following business benefits from this design:

1. We used to have performance issues with high volume interfaces. In conventional design the middleware was taking too much of time sometimes hours to process very large volume files. Now we are processing such scenarios in few seconds. For this reason many of the critical very high volume interfaces were manually run; not via integrated automated-process.

The entire design was based on a reusable framework. The inbound trigger Idoc / proxy framework can fit in various types of file processing  modules in form of plug-in function modules without modifying the file transmission mechanism. So the code for error handling/ reprocessing and basic file validation is part of the reusable framework. Only the application specific core file logics can be plugged-in.

Former Member
February 17, 2010 at 3:13 am
Thanks for the blog. It was an innovative thought.With PI 7.1 we have the advanced adapter engine which can play a similar role in increasing the through put.

PI 7.1 offers much more capabilities which can be used as a standard.

Hope we can avoid any kind of confusion !!

I dont see the exact use of PI here as you have processed your file through normal ftp mode with  point to point mechanism. And calling a JCO call from PI in the UDF to transfer the file is just like normal FTP. Really not sure the relation between PI and high volume here. Probably it might mislead some of the customers on ACTUAL capability of High Volume scenarios in PI?

Former Member
February 18, 2010 at 6:34 am
I think I have mentioned we are usng PI 7.0 where you do not have AAE. And this scenario is limited to multi-GB file pass-through scenario where you need no transformation/mapping. PI 7.0 is used as a control agent to coordinate the file move and file process here.
I have also mentioned that my client used to use many Control M jobs to do the same thing, by using PI 7.0 this way we have streamlined that process.