In this blog I will be discussing the  details of how to configure and set up the work status along with its featues. In the next blog in this series we will be covering the practical aspect of the same.

Concept of Owner and Manager (Mgr) 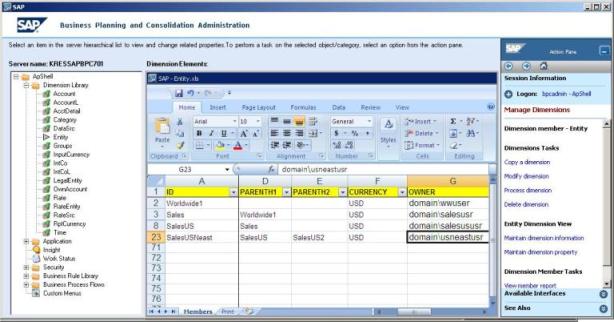 Similarly the MGR for the same entity would be the OWNER of the parent of the controlling entity. In the above example for entity SalesUSNest the owner would be domainusneastusr and the manager would be domainsalesususr. We can mention more than one user or have team id instead in this field

Note: This field is validated during the dimension processing.

At the application set level the work state can be maintained and configured. Work state lists the different status of a data combination. For example in a planning scenario the work status could be Unlocked, Submitted or Approved.  BPC allows adding additional work state to this default list. 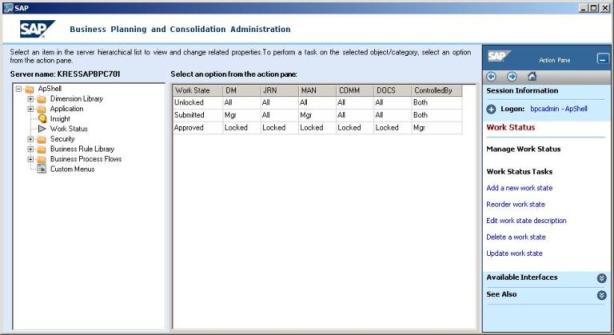 The work state also has a predefined sequence (order) in which it can be used. For example only after submitting a work it can be approved. This order can be changed using the “Reorder work state” option.

For every work state, there are five additional properties or attributes that needs to be configured to determine the lock behavior for different interfaces. The settings available for these interfaces are

A.    Locked – This locks sending the data via the interface for all,

B.    Owner – Allows the OWNER to send data via interface,

C.    Mgr – Allows the manage to send data via interface and

D.    All – Allows everyone to send the data via the interface (if the user has access via to the member via the security)

A.    DM determines the lock behavior of the data manager

B.    JRN determines the lock behavior of the Journals

C.    MAN determines the lock behavior of the data sent manually via the office

D.    COMM determines the lock behavior of the comments data

E.    DOC determines the lock behavior of the support document

The administrator can set the locking behavior for each of these interfaces at different work state levels. In the above example once the data intersection is submitted the data can be changed (manually/data manager) by the manger only. And once in the approved state it is locked for all the interfaces and users.

The controlled by column determines who can advance the data intersection in the given work status level. The three options available are owner, manager and both. In the above example the approved status for an intersection can be changed only by the manger (the owner of the parent member). 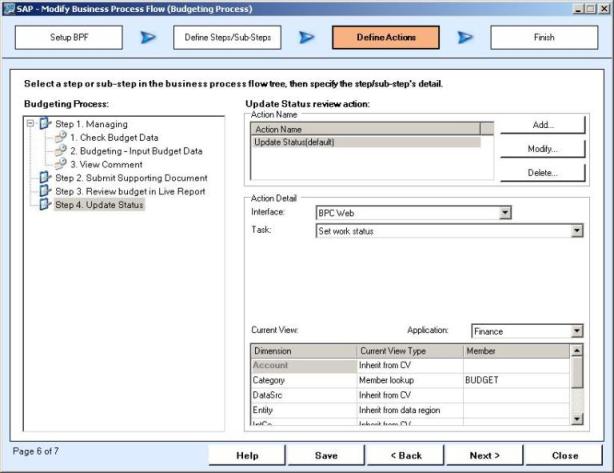 For the non work state dimension it is mandatory to specify a default member, this member is used as the default value in the back end tables.

For the work state or owner dimension it is mandatory to specify which hierarchy to be used.

Once these settings are done the settings should be saved. If this setting changes later point in time then all the historical information stored might be lost.

After following these steps you are ready to use the work status feature with in BPC. As we continue with the next blog of this series, we will cover the practical applications and aspects of configuring work status.

Jay Roble
February 17, 2010 at 4:56 am
Can you just confirm which BPC Versions & Support packs support this?