This first series of four blogs is dedicated to handling IFRS adoption for consolidated statements. They provide an overview of a new SAP “How-to guide” called “IFRS Adoption in Consolidated Statements using SAP® BusinessObjectsTM Financial Consolidation, starter kit for IFRS“. The objective is to bring practical guidance to end-users in order to manage successfully all the issues raised by the adoption of IFRSs and to get the maximum benefit from SAP® BusinessObjectsTM Financial Consolidation. The blogs will cover:

At the end of the fourth blog, we will provide a link to the “How to guide” including more charts and a complete illustration of the operating process to handle the IFRS adoption with SAP® BusinessObjectsTM Financial Consolidation, starter kit for IFRS.

These blogs have been written by members of the SAP EPM (Enterprise Performance Management) Starter Kits & Innovations team that develops starter kits on top of SAP financial consolidation products, Financial Consolidation (FC) and Business Planning and Consolidation (BPC). The starter kits are preconfigured contents created to deliver business logic, to speed-up the application deployment and to provide guidance to help maximize advantages of the product. The contents provided in the starter kits consist of reports, controls and rules for performing, validating and publishing a legal consolidation in accordance with IFRS. SAP starter kits for IFRS are provided to BPC/FC customers at no additional charge; they can be downloaded from SAP service market place at http://help.sap.com/.

In 2010, the EPM SK&I team will provide several series of blogs around IFRSs and consolidated statements.

To find out more about Starter Kits & Innovations materials, go to the Starter kit for SAP BusinessObjects solutions Wiki

Now to the first blog!

Adopting International Financial Reporting Standards (IFRS) is one of the most fundamental challenges that companies will have to deal with over the next few years in many countries. According to all publications on this topic, this project involves consideration of issues related to local and group accounting policies, financial reporting process, IT systems, internal control or stakeholder’s relations. Many countries have already announced plans to adopt IFRS, Brazil (from 2010), Canada, India, Thailand and Korea (from 2011), Malaysia and Mexico (from 2012), USA (possibly 2014), Japan and Taiwan (expected after 2014).

There are two ways of adopting IFRS:

On a specific day, the local Generally Accepted Accounting Principles (GAAP) is replaced by IFRS. The transition approach results in a “brutal” switch in a period of one year, during which, companies have to produce financial reports in both local GAAP and IFRS formats. European countries used this approach in 2005 and Canada will use it in 2011.

Countries adopting IFRS using the transition approach must apply IFRS1 “First-time Adoption of International Financial Reporting Standards”. IFRS1 establishes that an entity shall use the retrospective application of IFRS (with some mandatory exceptions and optional exemptions).

The following flow chart illustrates the dual reporting necessity (2010) implied by the retrospective approach under IFRS1: 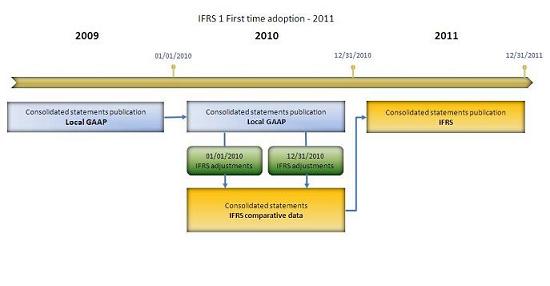 Domestic GAAP evolves progressively in a prescribed period of time in order to reach full compliance with IFRS. In this second approach, there is no “brutal” switch like for transition; it is a longer process that can ensure a smoother change. Australia, China, Japan and India have chosen this approach.

The convergence approach applied is not a dedicated IFRS standard; the operating mode is defined by local regulations. In such a case, there are two primary options:

One of the differences in the methods of financial reporting systems for consolidation purposes is that the Retrospective method raises more issues than the Prospective method, because it requires the reprocessing of past data.

In the IFRS Adoption In Consolidated Statements – Part 2 of this series, we will look at the operating issues to deal with in financial reporting systems when adopting IFRSs.

Acknowledgements to Fabienne Rojo, Patricia Meteil-Dutartre and Laetitia Lamoureux from the EPM SK&I team for their high contribution to the “How-to guide” paper.

Your comments about the contents are very welcome. Let us know what you wish to write about.
International Financial Reporting Standards (IFRS)