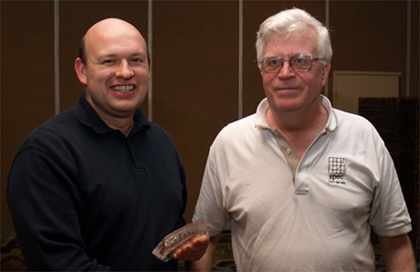 The SPEC organization honored Bernhard Riedhofer by giving him a “SPECtacular Award for Outstanding Contributions to SPECjEnterprise2010”.

Goal of the Standard Performance Evaluation Corporation (SPEC) is to provide a standardized set of relevant benchmarks for various technologies. One of the SPEC benchmarks is SPECjEnterprise2010, a Standard Industry Benchmark for Java EE applications, modeled after an end-to-end real-world business case.

SAP has been a member of the SPEC organization since 2003, and has participated in the Java subcommittee since 2006. Bernhard has made major contributions to SPECjEnterprise2010. His excellent work helps to give credibility to SAP’s strong support of and commitment to Open Standards.

Thanks and congratulations to Bernhard!

Here is the full laudation:

At SPEC’s annual meeting in San Jose, a SPECtacular Award for Outstanding Contributions was given to Bernhard Riedhofer for his work in the development of SPECjEnterprise2010. He was honored by his SPEC colleagues – your customers, suppliers, partners, and competitors – for excellent work and contributions to the organization. That which is measured, improves. And when the right things are measured in a fair and representative manner, then the improvements benefit the entire industry. Thanks to Mr. Riedhofer’s work in SPEC your customers are able to evaluate system performance with confidence, and your cost of standard benchmark measurement is significantly less than would be the cost of dozens of one-off benchmarks of lesser quality.  And for academia, the SPEC benchmarks provide a common reference point from which to begin performance related studies, and now also energy related studies.

Mr Specification.  Bernhard has contributed much of the SPECjenterprise2010 code and has made fixes to almost all components. Bernhard speaks very quietly and politely, and the development group learned early on that when Bernhard speaks, it pays to listen.  Bernhard most frequently contributed the phrase  “but I think in the specification it says…” . Of all Bernhard’s contributions to the benchmark and its overall quality, it is likely that his fixes to make the database loader run truly parallel are going to be the most appreciated by folks running large submissions.