With a wide vision what SAP Edentity promises,there is no doubt that it  needs to have a wider System landscape to support a gigantic database to hold on to the mammoth authenticated data which can be retrieved at any point of time on a finger tip.
SAP Edentity can be developed with the existing standards of SAP Applications. Completely hosted on ESOA, below is how Technically the System Landscape would look like. 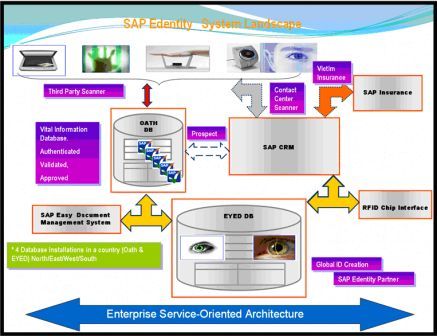 NOTE 3: SAP Edentity System has different Interfaces to bring in the desired Level of Accuracy and Authentication that is required.

In the next edition of the SAP ZIPPED 2022-Listen, Adapt & Zip- Vision 1.3  lets see Unique Number Creation considering India as a countires Organization Structure based on its Administrative Structure.

Disclaimer: The ideas mentioned in all the Visioneditions to come in SAP ZIPPED 2022 are all my imaginary visions and are  witha noble intention to envisage SAP as a life saver and with a viewpoint to seehow SAP will transform all our lives in the years to come. So request all myreaders to share your opinions. Good or bad, anything that would make me much moreconstructive and to publish Future Visions.

As such the ideas are purelymy personal ones  and I shall surely indicate wherever there areany cross any references.Anything  in case is already existingis purely coincidental andnot with personal intentions.