When it comes to collaboratively governed master data creation and maintenance processes in heterogeneous landscapes, SAP NetWeaver BPM together with SAP NetWeaver MDM provide the perfect environment for setting up end-to-end data governance workflows that span across several systems.
By combining SAP NetWeaver BPM and SAP NetWeaver MDM in such contexts, companies can flexibly define data creation and maintenance processes where a new master data record (for example, a customer or a supplier record) can be requested, checked, approved and finally created in a coherent process flow that includes required automated and manual tasks and associated roles. 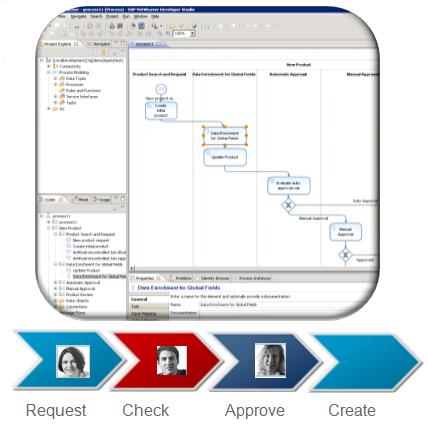 A Look at the Underlying Architecture 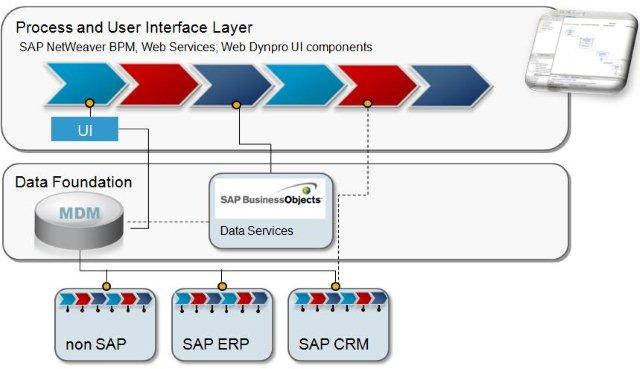 From an architectural perspective, such a scenario consists of different layers.
First, there is the process layer, in which a logical process is composed by defining an end-to-end workflow that involves automated steps and human interactions. The automated steps are based on WebService calls to the respective data foundation which consists of SAP NetWeaver MDM, SAP BusinessObjects Data Services, and any other WebService enabled backend-system. For human interactions, you have the user interface layer, for which you compose specific UIs based on WebDynpro technology that can be directly integrated with and consumed by SAP NetWeaver BPM.

Major data foundation components in this sample process are:

Process steps such as data creation approvals can be accessed through the portal-based Universal Worklist (UWL).

For an up-to-date picture of the overall functional scope of SAP NetWeaver MDM 7.1, see the overview presentation.

Markus Ganser
Blog Post Author
February 9, 2010 at 3:39 am
In the context of this MDM-BPM integration, you may read also the brand new
How To Consume MDM Web Dynpro Components how-to guide.

Former Member
February 11, 2010 at 12:14 am
Sorry, now I see it. I searched it in SAP Installations & Upgrades section. Not in Support packages and upgrades.

Jun Wu
February 24, 2010 at 7:38 am
thanks for the reply, the link is working fine when i access it from home.
My company may disable the access to internet media.

Markus Ganser
Blog Post Author
April 13, 2010 at 4:12 am
There is also a new article about SAP NetWeaver MDM integrating with SAP NetWeaver BPM that you may want to read for additional insight. See Enterprise Master Data Management.