Whatever happened to that shy guy? (fast forward to 2014)

Below is a post I wrote in 2010 (Feb 4, 2010 6:13:51 PM to be precise), about a former SAP executive.  Not only are many of the original links broken, but so is the company this story was about.  I won’t even pretend to analyze the failure in any depth – it was done to the hilt here: A Broken Place: The Spectacular Failure Of The Startup That Was Going To Change The World.

About all I can do is try to fix some links, and at the end of the original post, summarize my thoughts.  The Better Place site is down, for good, so I won’t even search for archived repositories for them.  And Shai’s blog on SCN seems to have suffered a memory lapse, as the link to weblogs.sdn.sap.com/pub/u/6806 goes to the main page.

Large hotels seem to routinely provide copies of USA Today, which I don’t make a habit of reading, typically stepping over the doormat copy like roadkill.  I go to the gift shop, and pick up the local newspaper.  Or better yet, I find a copy in the rack outside a local restaurant and enjoy the minutia of the local culture while partaking of the cuisine surrounded by people who live and work there, not the global transients at hotels.  At the ASUG planning meeting in Atlanta, however, the Atlanta Journal-Constitution was not in the rack where it should have been. I settled for a New York Times.  As it turned out, I didn’t finish reading it for a couple days; the flight was quick, I talked to a colleague in the airport before “enplaning” and on arrival home practically went right back to work.

Stuck inside page B3 was the headline “Sites to Refuel Electric Cars Gain a Big Dose of Funds” and a tiny picture of http://weblogs.sdn.sap.com/pub/u/6806 [original link is broken], former  “SAP Executive Board member in charge of the Product and Technology Group, among other things” (according to his http://weblogs.sdn.sap.com/pub/u/6806 [original link is broken] tagline).  The article talks about an infusion of money that Shai’s company has received from banks and venture capitalists, in exchange for the traditional seat on the board of directors.  We’re talking big money here, more than most of us will earn in our entire lives, and maybe our childrens lives too.

I’d make an analogy between Better Place [link is dead] (the name of Shai’s company)  and Twitter, that darling of the instant gratification, er, messaging set. Both are start ups with visionary ideas, taking off in entirely new directions.  Twitter keeps getting more capital, and spending it, while not quite making money yet.  There is revenue, as far as I can tell, but it’s not a pay-per-use model, except to cell carriers who exact their trolls. Better Place is also getting capital, and spending it, but not only does it not have revenue coming in, it doesn’t have a consumer product yet. There have been demos, which promise to reshape the world of transportation as we know it.

What is a Better Place?

Probably the question you’re asking now, is what does this topic have to do with SAP, other than someone who worked at SAP is now building a global electric charging station network, not selling software?  First, a few links for background [anything betterplace.com is dead]:

On the one hand, I can see the conversion from fossil-fuels to electric powered vehicles is not just a necessity from a price, pollution, and global warming perspective, it’s an idea that seems inevitable.  Yet, there have been several false starts, and with an economic slowdown not only has the price of oil stabilized from peaks of 2 years ago, investment money has been difficult to pry loose for alternative energy projects in some cases.  So it’s an amazing story that Better Place continues with their plan to roll out electric charging stations.  I’d drive one of their cars if they were available.

In SAP’s Sustainability initiatives, tracking executive automobile use as well as other fuel use.  That’s a topic we’ll explore in an SAP Mentor webcast on 15-Feb-2010.  See sapmentors.sap.com for more details. If you have questions or comments throw them on the blog and we’ll do our best to answer.

An October 2009 [dead] press release said that a pilot will be conducted around Jerusalem over the next 18 months. The articles above demonstrate good press, good showmanship and good salesmanship.  What I’m not seeing so far is the kind of Consumer Reports reviews of the technology.  The only link I found from that august group was a blog from April 2009 in an “auto show” style.

(this SDN profile picture was too good not to link to 😉

As I could not locate Shai’s SCN blogger profile, I am taking the liberty of linking to an image uploaded in 2004 to SCN by Brian Willis ( Is Shai Agassi an Über Geek? ) –

As an aside, during the Jive SCN ugrade a couple years back, we were given the opportunity to move our “personal” blogs to a specific space on the newer site.  I chose not to do so, as I had posted something like 300 “weblogs” and the amount of work seemed more than the return could be.  After I finish editing this (please don’t lose my changes Jive, pretty please), I’m going to attempt to move this to the Sustainability site.  If that works, it’s going to throw a spanner in the works of all the happy chat about technology fixing the world that I’ve seen go by lately, and barely have time to stave off, I mean, moderate.

As for replaceable battery tech for cars, this massive fail will seriously weigh on the minds of potential future investors.  Fool me once, okay, but who’s going to ask for this funding scale again?  As for that shy guy, who knows? The Fast Company story hints he will be back.  In the Bizarro social media world, the betterplace page still exists, on Facebook.  He’s got over 12,000 ‘followers’ on LinkedIn, with no current job title advertised.  On twitter, there’s a German company with the handles @betterplace_org and @betterplacelab, but no apparent relation [ betterplace.org/de/ verified ].  Shai’s twitter handle: sagassi. I will end with this tweet from the man, just after the FastCo article hit: 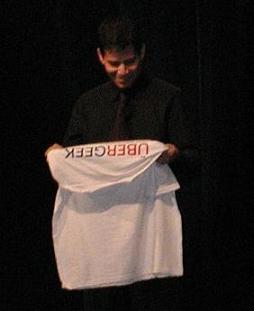 Former Member
February 5, 2010 at 5:06 am
Also for a little bit lighter side, he made an appearance on the Colbert Report.  You can check out the interview at http://www.colbertnation.com/the-colbert-report-videos/249718/september-22-2009/shai-agassi

Clinton Jones
February 5, 2010 at 9:58 am
The January issue of the IEEE's spectrum ran a good article describing concerns about charging stations overloading the grid http://spectrum.ieee.org/green-tech/advanced-cars/speed-bumps-ahead-for-electricvehicle-charging and around the same time Autosavant ran a good posting alluding to grid overload as well http://www.autosavant.com/2010/01/14/plug-in-vehicles-and-the-power-grid/

From an SAP systems perspective I see further roll-ons being more detailed customer statistical analysis in the BI/BW space and geosystem reporting, infrastructural enhancement planning and of course mass adds and changes to data in SAP systems in PM and possibly PLM in response to business activity to cope with what could become a significant pressure to increase utility companies' physical capacity and the  management or resources and infrastructure.

In the non-SAP space, who knows? We may even start to see gas station real estate being repurposed to make way for more electricity transformer substations.

Gregory Misiorek
February 8, 2010 at 5:21 am
i just heard Mr Agassi has raised almost $1B for his new venture, so check it out when u are in Denmark or Isreal any time soon and let us all know how u liked it.