PI/XI: how to preserve values from communication channels during importing?

As we all know some of the communication channel parameters get overwritten
during the import procedure. This is actually good as we don’t want to
have an activated channel on production that would pick up the files from DEV/TEST
environment and as those values get overwritten you cannot activate the channel
so it’s safe until you manually put correct values inside it. But there are times
when preserving those channel parameters might be useful and it can safe a lot of time
like migrations to a new environment or different sorts of recoveries.

There is no standard SAP supported way of doing this so please keep in mind
that the way proposed in this blog is not SAP recommended – it’s just a workaround.

Let’s take an example and try to preserve value of the Source Directory of the file adapter
as in standard during the importing procedure it would get replaced with a default value -> ‘/’.

1. When we open Enteprise Services Repository you can find SAP BASIS SWCV
and underneath namespace – http://sap.com/xi/XI/System

2. Open this namespace and go to adapter metadata.

3. Open file adapter metadata and go to the change mode (you need to make your SWCV – SAP BASIS
editable first)

4. Search for file.sourceDir attribute and it should look like the one in the Figure below: 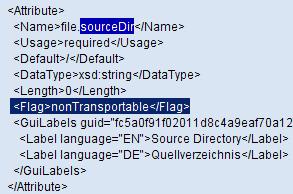 5. As you can see there is a field – Flag with nonTransportable option checked

6. Remove this flag so it will look like in the Figure below: 7. Now you can export and import the communication channel and you will see that
for all file channels field sourceDir (availabe in the sender File adapter) was
the same as before the import – so it was not changed.

8. You can do it for all other fields which have the nonTransportable flag option.

2. This procedure is not SAP recommended – use it at your own risk.

I’d like to thank Mariusz Marczak for this excellent idea.

Shabarish Vijayakumar
February 3, 2010 at 3:00 am
Guess SAP should provide this as a standard feature.

As one of my friend was mentioning, it can be a great option for XI/PI migration projects

I can add a little workaround so this will also work for password fields - at your own risk of course... 🙂

In the adapter metadata xml, change all occurrences of Attribute isPassword="true" to "false".

( this is also a way to display a forgotten password on a channel! )

Remember to import the metadata xml on both source and target system.

1 + 4 may not be needed, but I am not quite sure it will always work if the source SAP_BASIS can not be found on the target system.

Even if you never activate the imported channels, it may sometimes still make sense to import them in order to see the full configuration for the channels, including passwords. There may be situations where you do not have access to the source system when working on the target system. Then it is very convenient to have a full configuration visible. This eliminates the need for extra documentation, like screenshots, to complete the configuration.

Note the following when doing the password trick:
1. You may want to check SAP Note Number 1240862 "Incorrect password returned when ispassword=false in AMD"
2. Be sure to revert to the original SAP_BASIS version as soon as you have done your changes.
3. Try to avoid changing SAP_BASIS while other users are changing/activating channels. This may lead to confusion and possibly inconsistencies/errors.

Thanks again for sharing this idea!

I wrote: "Remember to import the metadata xml on both source and target system".