What are its major features and what’s new for the SAP Netweaver 7.2 CE release?

The Composite Designer unifies in one perspective most of the toolsets for the well-know technologies and standards (SAP and non-SAP) for building composite applications. For example, these could be Web Dynpro or Visual Composer for user interface creation, Java EE-based or SOA-based objects for business logic realization and so on.

Using only this perspective you directly start wizards for creating various development objects which otherwise you would create using a dedicated perspective for each one of them. But while switching between numerous perspectives you could lose the central focus on developing your composite application.

Then once having the objects, you create possible relations between them with a simple action – drag and drop a pointer from the first object to the second one.

Moreover, as a central entry point the Composite Designer provides a graphical overview of a composite which visualizes all development objects in the composite application.

Probably the best facilitation for you is the presence of the so called “palette”, containing most of the necessary development objects for building a composite application. The palette is simply a window from which you can directly “drag and drop” the desired object in the graphical overview of your product.

Here is a picture illustrating the graphical overview of an example (not real) product including the “palette” for development. 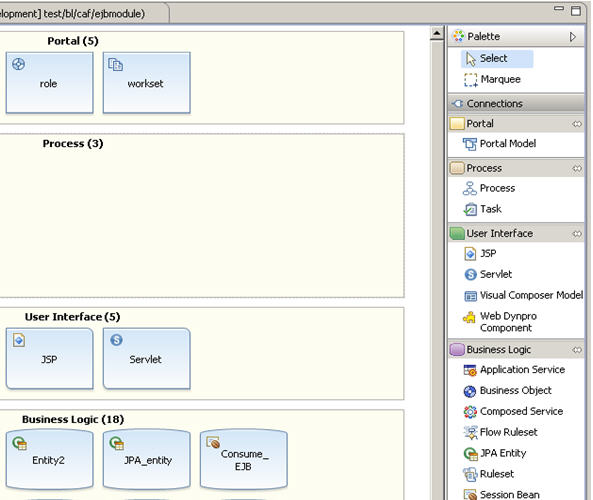 Another important feature of the Composite Designer that you can use is the possibility to display all the relations for a specific development object either within the central composite application overview, or using a separate view – the Relations view. The Relations view provides a deeper level of details. It also visualizes intermediate elements that are not displayed in the application overview. For example, an intermediate element could be any kind of interface such as Java interface or Web Dynpro component interface definition. The first picture illustrates the central overview relation case, and also demonstrates the different levels of objects display that the Composite Designer allows. As you can see the portal, process, and business layer objects are one level smaller or they can be even hidden if you want. 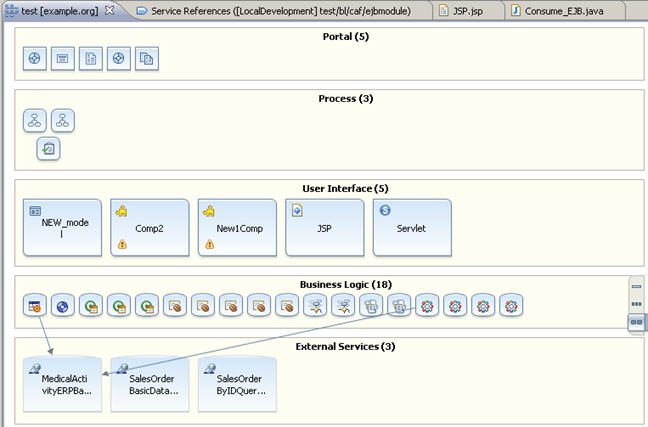 The second picture represents the Relations view case which you can execute from the context menu of each development object. Then the objects relations are displayed in separate window.

Except displaying the existing relations you can test a relation for which an error is reported. You can execute this by choosing the corresponding relation and then right-click on the “Check Results”. 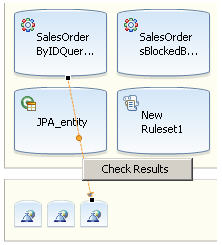 Having all the objects and the corresponding relations visualized would significantly facilitate your work and would help you to illustrate and design the “skeleton” of your application. Of course, once having the “backbone” of your composite application, later on you (as a specific area developer) need to go deeper and provide specific implementations for the development objects you have designed your composite with.As you can see the development objects in the palette are grouped under layers that are part of the standard structure of the composite applications.The following layers are represented in the Composite Designer:

What are the new features for the Composite Designer in the SAP NetWeaver 7.2 CE?

To review the difference between the SAP NetWeaver 7.2 CE release compared with the older one (NetWeaver 7.1 CE EH.P1 release) we created the following list: