Supernova is a great conference. One of the main reasons is its host Kevin Werbach’s background. He is professor of Legal Studies at the Wharton School and co-led the review of the Federal Communications Commission for the Obama Administration’s Presidential Transition Team. Therefore he brings a Washington as well as a legal perspective to our Silicon Valley world of technology and startups. It is at the intersection of different disciplines where the real interesting things are happening.

Unfortunately I was really busy that week and was only able to participate one day. My tweets of that help me get my thoughts organized:

I brought an SAP Mentor ribbon from TechEd to the event and added it to my badge. Adam Greenfield talked about our changing world and how pervasive connectivity is altering everything from our social interactions to our cities.

I love what Vivek Hutheesing  and team are trying to do with rBlock: Creating community around the block where you live. Vivek got his motivation for this from reading Bowling Alone, which covers the collapse of the American community. To try to revive it and bring us closer together is a worthwhile task.

But there is also another dimension to it: Coming from Germany the block is strongly associated with Blockwart of Nazi Germany: From Wikipedia:  Blockleiter [Blockwart] (block leader) was the lowest official of the NSDAP, responsible for the political supervision of a neighborhood or city block. … It was also the duty of the Blockleiter to spy on the population and report any anti-Nazi activities to the local office.

Adam Greenfield said that the turnover within an apartment building accelerated dramatically once they installed a bulletin board for the whole building. With it everyone got to know everyone else in the building.

His reasoning was that we don’t necessarily want to know or are comfortable with knowing who all of our neighbors are and what they are up to. Or they felt supervised ala Blockwart.

I think we need a longer study to get to the ground of this. Wouldn’t self selection click in and level off the turnover after a while? But if true it will be tough for rBlock to succeed.

Who is watching the watchers? David Brin’s Transparent Society is recommended reading for he is tackling in that book the intersection of technology, privacy and freedom. It came out in 1998, but oh so relevant a decade later.

finnern: San Francisco is Montana for liberals @anildash #sn09: FCC did enable Wi-Fi — But FCC could open up so much more spectrum. Reply · View Tweet

finnern: The role for government is to be a platform, to create content on open standards so that everyone can pick them up and repost. #sn09 Reply · View Tweet

Excellent position for a government to operate from. Whatever we do, we are the platform to enable our citizen to be successful. Let’s make everything that we are doing transparent, extensible, mashable, … to the benefit of everyone involved. I am writing this as a citizen, my employer probably has a different opinion. Models are possible and we should work towards, where the code is transparent and the APIs are open, but you are not allowed to copy – paste – resell existing code. 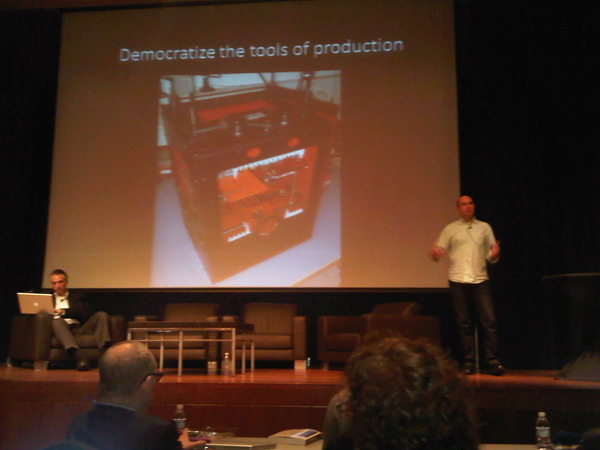 That onewas sweet to see. As in 2005 we had Neil Gerschenfeld from the MIT Lab at the Future Salon talking about FabLabs. Back then he said: Regarding manipulating the physical world and creating almost everything, we are about as far as we were with computer in the 70s: You still need a big room and $30K to be able to do that, but let some miniaturization go over that and it will be possible to do it with a little printer on your desk. (Check out the FabLab Future Salon video. He starts off with super dense information, which went over most people’s head, but after those he really shows some interesting examples of working FabLabs.)

Now Chris Anderson showed a picture of a prototype printer that you can buy today for $700 confirming Neil’s claim 4 years later. Keep an eye on that space, a lot of accelerating change will happen in the coming years. It is one of the reasons why Make magazine and Maker Fair is such a success, one of my favorite trends in recent years.

Using the model of amateur collaboration and DIY Chris Anderson has created a community around do-it-yourself -drones: DIYDrones.com.

He found the best model airplane and community expert for the development of diydrones.com in Jordi Munoz. back then a 19 year old high school dropout from Tijuana now living in LA.

Chris said Jordi has a “Google PHD” as in he is clearly a top expert in the field of developing and programming drones, and he got to the level of expertise not via formal education, but by using Google search.

Universities or for that matter higher education as we know it is doomed. You can find the knowledge via Google and YouTube searches. It doesn’t make sense to spend all that money for schooling. Much more important to hone your skills in learning and finding out what the unique gift is that you or your kids bring to this world and follow that bliss.

I hear you say, but don’t forget the connections that you will get through your Ivy League education. It wasn’t the case before, as a study showed comparing the success of Ivy League folks with the ones that would have been admitted to one, but choose to go to a regular college. There is no difference in success. See Malcolm Gladwell’s excellent New Yorker article: Most likely to succeed. If you are passionate about something to get connected to others in that field is easier than ever.

Another great post regarding the future of higher education is Jon Robb a Future Salon speaker who writes about the Education bubble. We have reached the point where you are not able to earn back the price for your education during your lifetime of work.

Application.  As MIT is finding out, JIT (just-in-time information) in combination with simulated application of the concept to real scenarios is the best method for success.  The advent of computer simulated virtual worlds for in the computer gaming industry have proven this combination (JIT info and immediate application) can train kids to adults in complicated and complex tasks in a fraction of the time other methods require.

Entrepreneurial innovation.  As student populations at the collegiate level dwindle due to cost pressures, a major University (with a brand as good as MITs or Harvard), opts to offer full credentials to online student (at a tiny fraction of the cost of being in attendance).  Ten million students enroll in the first year to attend Harvard’s virtual world.

I should go deeper into this trend in a separate post.

finnern: Interesting insight .@blephen: Innovation is driven by the flame of anger. 1 can tell products designed by committee vs the flame #sn09 Reply · View Tweet

The old saying is: A camel is a horse designed by committee.

I made the experience years ago, when I was responsible for creating the SDN Crew and for the first time SDN Mentor shirts. Back then we gave the most active SDN members during TechEd the same shirt as our team. Just instead of SDN Crew is said SDN Mentor.

I wanted really cool turtlenecks, not realizing that for most these are too warm during a tradeshow. Limited budget and a couple of rounds of committee sessions and we ended up with a baby blue mock turtleneck, which was almost universally disliked. (Even though I wore it again the other day and it isn’t that bad 😉 The year after, there was a lot more scrutiny regarding the shirt design.

From that experience, I worked mostly in stealth mode when designing the SAP Mentor Rugby shirt this year. I saw that at Ralf Lauren you can create your own vintage Rugby shirt. That gave me the idea that we could create individual shirts for every SAP Mentor with their own name and number on the back. Many chose their twitter handle as the name, which made it even more interesting.

I only consulted with a handful key fashion conscious people to make sure that I am not totally off the mark. Thank you Anne Katherine Petterøe, Jodi Fleischmann and the best wife of all for convincing me to go with a white collar instead of an SAP yellow one 😉

I had to fight big budget battles as these shirts were over 5 times more expensive than regular ones, but I was determined and didn’t budge: Yes, we need the SAP Mentor ! sun, better known as lemon, on the sleeve. 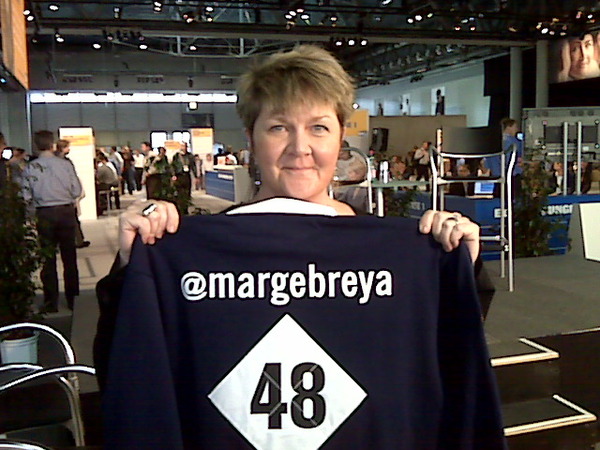 The shirts were a total success and worth every penny, even the Enterprise Geeks mentions them in one of their latest podcasts (min 28+) when they did their TechEd review.

Jeff Schwarz  aka @blephen later at the reception came up to me and said: Your Future Salon sessions, not always but often cover and make me aware of things that are coming true years later. – That made my day.

finnern: #sn09 food for thought: @zephoria authenticity versus sincerity online. I think we need a glass of wine with that food 😉  Reply · View Tweet

During a break Kaliya Hamlin, Stuart Henshall and I talked about how Twitter is changing the backchannel at conferences. Before Twitter IRC Chat was used to, oh well chat about what is going on.

I never really got into IRC, as it seemed to cliquish. A couple of people would dominate the conversation and drown out any dissonance. You felt like you stumbled into a party, that you had not been invited to and where you don’t know anyone.

These dynamics totally change to the better on the Twitter stream. No one is dominating it. You like a thought or have an observation and like a little wooden toy boat you send it off into the twitter stream. You watch the stream and see other little boats come by carrying messages from their senders and if you like one, you give it a little rt: push and the boat’s message gets a little bigger.

During the evening reception I talked to ESME Vos. She wasn’t too happy to hear that there is an Enterprise Short Message Experiment (ESME) project. (Great post by Richard Hirsch by the way: 12Sprints ESME integration

She is heading a really interesting startup that develops technology/social sites that enable fans to find and buy what they see on television, especially cheap knock-offs.

Example for the TV show Gossip Girl, I am so non hip, that I didn’t even know it existed even though it has 1.8 Million Facebook fans. ESME’s startup has created a ShopGossipGirl.com where they post cloths that were worn on the show, ideally cheap knock offs and get a cut when there is a sale.

I am convinced every show will have that soon, even in different levels: Here is the original Prada for $30.000 and here you can buy the knock off from Zara for $300.

I am crossing my fingers, that the show producers will white label ESME’s technology to do that.

Brad Templeton (who prefers IRC chat over Twitter as conference backchannel) left me with an interesting thought. Soon face recognition software will be good enough to recognize us, even on old security camera footage. Computers will be able to analyze vast amounts of videos and stitch together almost every move in your life. First it will hit president candidates and celebrities. Will hiring managers have access to highlights of your footage? Vanish is an interesting Wired article about a reporter trying to get away and the collective net trying to find his whereabouts.