Why are my calculations wrong? (Redux)

I had previously written a very technically focused description of what values you can expect when two calculations intersect in a Voyager workspace (see the above URL). I have since come up with a much less technical explanation comparing Voyager to what you can do with Excel formulas.

Imagine you have some data in Excel:

You now want to find percentage growth between 2008 and 2009 so you add a formula for each cell in column D.

Now you are interested in just the total of B and C so you create an extra row and start filling in the formulas. 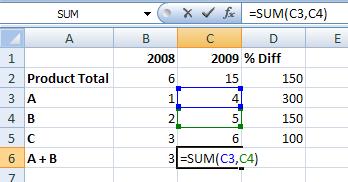 When you get to cell D6 which formula do you write? Is it the sum of D3 and D4 or the percentage difference of B6 and C6? It is clearly more useful to know the percentage growth of the 2008 and 2009 totals for A and B than it is to sum up the percentages in column D. So you can choose to enter that formula in cell D6.

So if both calculations have a solve order of 1 which one wins?  This unfortunately does not have a clear explanation so it could come out with the right or wrong answer depending on how lucky you are.

The exception to this is the Voyager rollup calculation. This has special behavior as it has a lower solve order than any calculated member it interacts with (the roll up calculations uses the MDX AGGREGATE() function which has this special behavior). If instead of doing the sum of A and B in the above example, you do the rollup of A and B then you can guarantee that the percentage calculation will win.

A deeper more technically focused explanation of this can be found here Why are my calculations wrong?