I would like to present a series of weblogs on iWay Siebel adapter. Recently I got an opportunity to work on integrating Siebel system with SAP system using XI/PI. We used iWay Siebel Adapters for connecting the Siebel system.

Part1:  In this weblog I would explain the importance of Siebel iWay adapter,use of    iWay explorer and also about Siebel workflow process.

Part2:  Present the different protocols in Siebel adapter and its advantages and Siebel Outbound Scenario with example of business case.

Introducing the iWay Adapter for Siebel:

Adapter is a communication object which can connect to any application from or to XI/PI system and exchanges the data .We have  SAP provided adapters in the system which would would be available along with installation like File,JDBC,JMS,IDOC adapters etc.

Sometimes we need to connect different systems with SAP which cannot be supported using the SAP provided adapters as mentioned above. So the company iWay has come up with set of third party adapters which are called iWay Adapters to meet any kind of requirements. Following are some of the iWay adapters Siebel, PeopleSoft, Sieburger, JDEdwards etc..

We have to separately buy this iWay adapter as per the integration requirement and should install it in the landscape. Once we install the iWay adapter, we can see the installed adapter in normal adapter list in the Integration Directory.

Siebel adapter is one of the iWay Adapter which can be used for connecting the Siebel system to exchange business data between Siebel systems and SAP XI/PI. We can also connect to other third party applications directly using this Adapter.

There are three different data objects in Siebel system which are Integration objects, Business objects and business components. 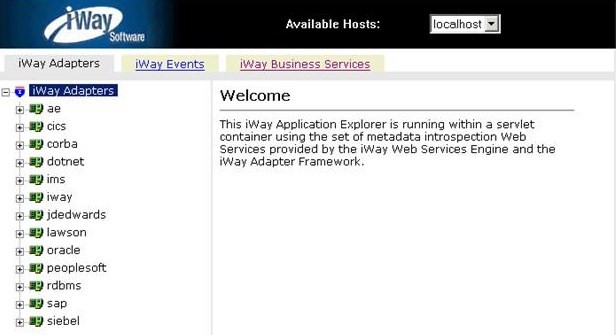 We can access the explorer as shown in above Fig. once iWay adapter installed in the landscape. This explorer can be used for accessing the Integration objects, business objects and business components and also used to create the XSD’s from these objects. These XSD’s can be directly imported under “external definitions” in Integration Repository objects.

You can access the explorer using the below link.

We can also create the channels and check the status in iWay explorer separately.

This workflow triggers when any new  operation performed in siebel application and converts the Siebel data into XML message and sends to SAP PI/XI as explained below.

1. Calls the Siebel EAI Adapter, which queries for the newly updated account record, and places the data in its original internal structure.

2. Calls the Siebel XML Converter, which converts the data into an XML message.

After the message is placed in the message queue, it is retrieved by an iWay Adapter for Siebel  and sends the message to XI/PI system for further processing.

In this example, upon receipt of the XML message in the message queue from XI/PI, the applicable transport protocol (EX: Siebel MQSeries Receiver server task) initiates a Siebel Workflow process, which in turn executes a series of following steps:

2. Calls the Siebel EAI Siebel Adapter, which applies the newly updated account record based on the methods defined in its service .

Ex: update the account data in Siebel application which is received from XI/PI.

Former Member
December 6, 2009 at 10:13 pm
This is an excellent blog.It's great to see content like this.Thanks for taking time and effort to publish such a great blog.
Hoping for more such insightful blogs.