If you have read ThingFinder + MS Outlook = happier enterprise information workers, you know what it is. You might have also seen me presenting with Hans Peukert during the TechEd Demo Jam in Phoenix, or with Alexander Dreiling in Vienna.

During the Demo Jam, we spent roughly last 30 seconds of the presentation showing Yowie in Google Wave. We didn’t go into much detail, as the project is still not finished, but I though it would be fair to let the SDN community know what we are up to.

In this short post I am going to briefly describe Yowie Project in Wave – that is, what we’ve developed and how it works.

If you want to know further technical details, try the limited version of Yowie Project yourself, or even contribute to it, please get in touch with me.Most importantly: please leave some comments if you believe we can improve the prototype!

But let’s get to the prototype. Sarah (you might know her from the Gravity – Collaborative Business Process Modelling within Google Wave video) is a Business Development Manager. She has just finished a meeting with a customer and wants to discuss the meeting with Mary (Customer Relations Manager) and Tom (a sales representative).

Google Wave is the collaboration environment of choice in Sarah’s organization – so she creates a new Wave and adds Mary and Tom. She also adds Yowie – to streamline the communication. If you know a bit about Wave, Yowie is a Gadget and a Robot at the same time. Sarah adds Yowie Robot, so that it can read everything that is written in the Wave, and Yowie Robot places its own gadget in the Wave. Yowie will put all of its findings into this gadget. We had initially allowed Yowie Robot to write about its findings directly in the Wave conversation (just like any human user would), but later we realised it was not that good – people were a bit confused, especially when they already knew what Yowie was writing about. So we decided to go for an approach similar to the traditional Yowie – providing a separate space for all the related information and actions.

In summary, Sarah creates a wave, and invites Mary, Tom, and Yowie. Here’s what she sees. Initially nothing very exciting, but this is how the conversation unfolds. Yowie keeps reading what Sarah writes. Immediately after she has written a blip about her meeting, Yowie takes the text and sends it to our text analytics engine (the engine is running in the cloud, so it’s accessible from anywhere). The engine replies with an analysis of the text and Yowie presents it in the gadget. 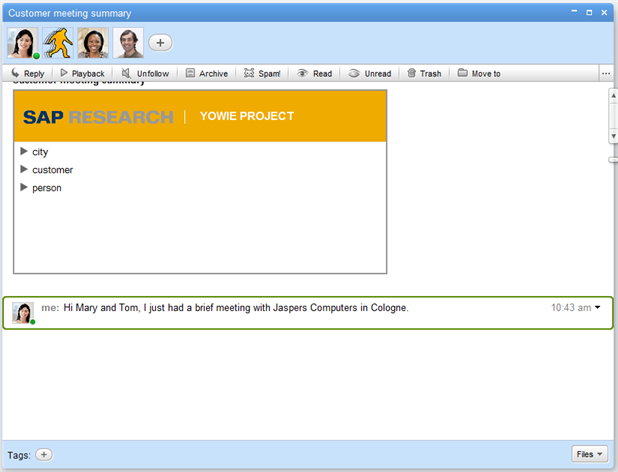 Yowie does even more than that. After checking with the text analytics engine, it goes to another service we host, a service that provides suggestions on what could be done with the recognized entities. We see that with the recognized city of Cologne, we can read some Google News about it, see it on the map, view nearby customers, or even view a Wikipedia entry. All of it is fully customisable – we can use services on the Web, or enterprise services (provided they are accessible by Yowie). You might remember in Phoenix and Vienna we showed an additional service – nightclubs in the city. As I said, Yowie Project is fully flexible! 🙂 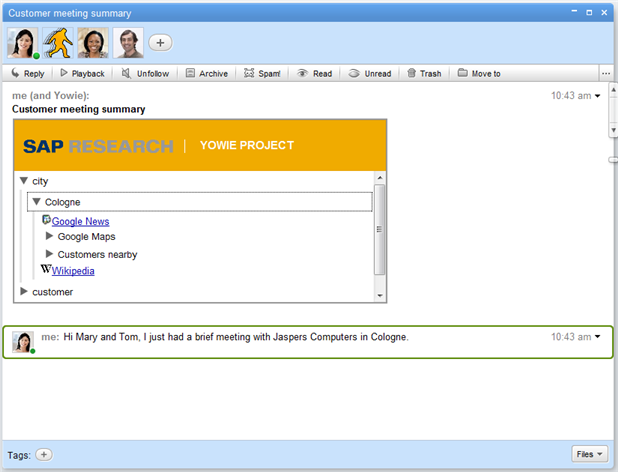 Here is a screenshot of what Yowie shows about the customer – we can retrieve all sorts of information from enterprise systems and include it in Yowie. 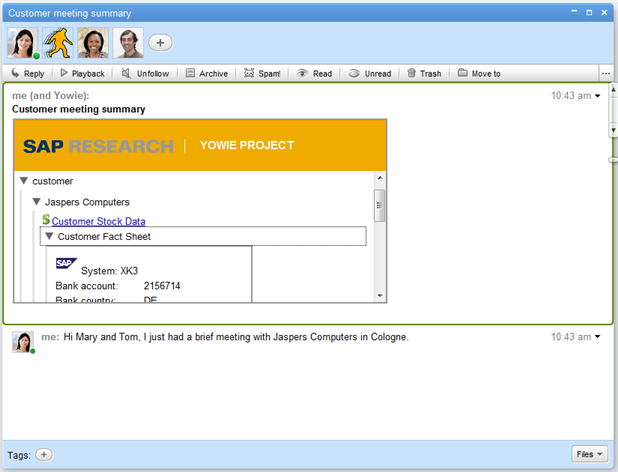 Mary has a similar view in her conversation. This is where Yowie becomes very important. If Mary didn’t know anything about Cologne or Jaspers Computers, rather than using other applications or asking people in the conversation, she can quickly check Yowie, and now she is well informed!

Yowie keeps analyzing the conversation. So the next time somebody writes about an entity that Yowie is able to recognize (and provide more information), it updates the gadget. 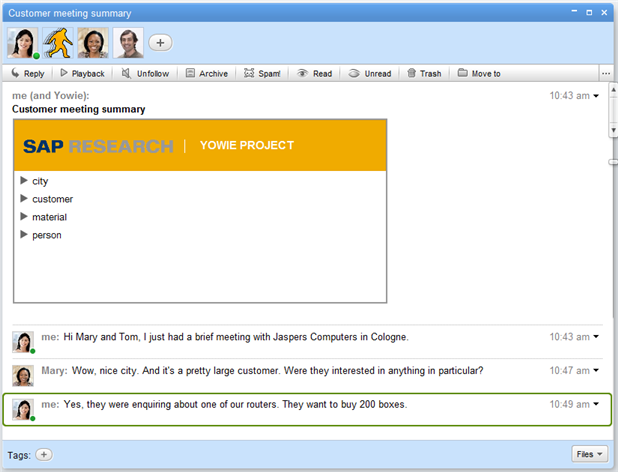 And again, this proves to be very helpful for other participants in the conversation. Here, Tom can quickly check stock levels of the routers Sarah mentioned. There is some ambiguity, so Tom has to ask one more question… 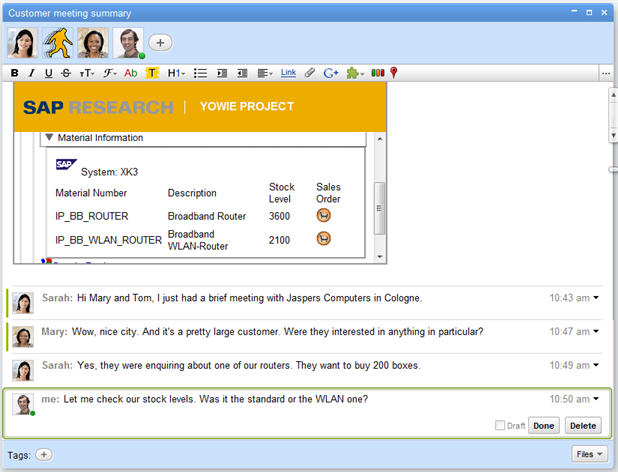 Now Tom can just click on an icon in the Yowie gadget to go directly to his SAP system and create a sales order. He completes this straight from Wave, no need to remember transaction codes, no need to start the SAP client! Why have we do this? Just like with the An unconventional use of SAP Text Analysis application, we are trying to show how easy to use text analysis services can be. And how they can enable completely unforeseen scnearios.

For all of you who made it that far into this post, here’s a video of the scenario!

We are currently looking at various text analysis tools to integrate in Apache ESME - an open-source Enterprise Microblogging platform. We'd love to integrate with you guys. You could take the analysis engine which is used in the wave and use it to perform actions on back-end systems based on message contents. If you are interested, contact me - either via the details on my business card or ask Alex - he has all my contact details.

Former Member
November 25, 2009 at 4:14 am
I have been involved with Wave for some time now and it's great to see SAP being involved in it as well.  It would have been nicer to use some Webdynpro screens instead of the SAPGUI screens, that would have made the demo even more impressive IMO.

Former Member
November 25, 2009 at 9:22 am
Very interesting!!! And you made the blog really easy to follow with the screenshots. Thanks.