Free style hierarchy group feature has been provided to manage the mass device scenario where managing multiple devices with multiple application is a cumbersome job. One of the most important activities of mobile administrator is to deploy applications to the mobile devices. In a productive scenario, there will be thousands of mobile devices and assigning application to each and every device is a complex job of administrator.
Hierarchy groups are introduced to make the administrator job easy in assigning applications to devices. For every node in hierarchy, devices, MCDs and device templates can be assigned. If a device template is assigned to a node in hierarchy, it will go to all the devices assigned at this node and to all its child nodes automatically.

This feature suffices the migration of all the hierarchy groups running in Mobile Infrastructure 7.0 to new Mobile Middleware i.e. DOE. This functionality supports the backward compatibility from DOE to MI 7.0 versions.

In the SAP NetWeaver mobile a link has been provided for the freestyle hierarchy groups. Where administrators can go and create the hierarchy. A pictorial representation of hierarchical group looks like: For every device in RMM store, the attributes DEVICE_TEMPLATE, DM_SWCV and MCDNAME_VERSION are already defined as multi value attributes. That means one device can have any number of device templates, DMSWCVs and MCDs assigned to it. We will see by several use cases how the freestyle hierarchy group feature is useful in managing the devices from device inventory:

Case 1:
When a device template, DMSWCV or MCD assigned new to a node in a hierarchy group, then get all the devices assigned to that node and also from its child nodes and set the corresponding device attribute values in the RMM store.

Case 2:
When a new device is assigned to a node in hierarchy group, then get all the device templates, DMSWCVs and MCDs assigned to that node and to all child nodes, and set the corresponding device attribute value in RMM store for that device.

Step 4: After creating the group you can create the node in the hierarchy as well as delete the already created node from that hierarchy.

Step 5: In any of hierarchy four nodes has been provided namely DEVICES, DEVICE_PROFILE, DMSWCV and MCD. User can select any of the nodes any add or remove the entries by using Add/Remove button. For each of the node search option has provided where user can select and assign to the hierarchy group node. 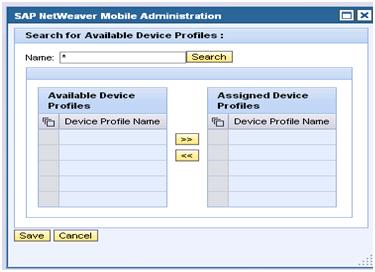 After the completion of all the steps a new hierarchy group is created and ready to use for the mass device management.