B Velu Pillai already described the SAP Community Networking Reception held in honor of Top Contributors and mentors here in Bangalore and Mark Yolton even managed a comment (gesh you guys are so very fast).  See:

But before we jump into the full activities that launch later this morning here in SAP TechEd ’09 India, I want to share a few impressions of the evening.

In this video clip Michael Bechauf presented our mentors with their Rugby shirts so they join the rank of the fabulous numbered crew.

One of my favorite networking interactions during the TechEd events is meeting new folks.

There were a number of “net new” attendees and we all did some intros.  I grabbed a shot of two top contributors in the Portals and KM areas respectively.  It was a pleasure hearing them introduce themselves and learning that they (who know each other well online) were together again for the first time! 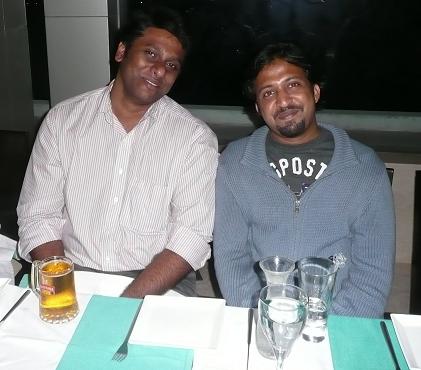 Marilyn Pratt
Blog Post Author
November 18, 2009 at 2:18 am
It's waiting for you in the Community Clubhouse Desk or look for me

Former Member
November 18, 2009 at 10:26 am
Marilyn, thanks for the gesture..it was indeed an evening to be remembered for a life time.

G Lakshmipathi
November 18, 2009 at 8:51 pm
It was nice to chat with all friends on 17th night and thanks for the special invitation though I am not a Mentor

where can we find the on stage photo of our little group?