An unconventional use of SAP Text Analysis

So what do you do when you get stuck in traffic?

Use SAP to help you?

Well, maybe next time you will, especially if you have an iPhone.

At SAP Research we enjoy playing with new technologies. We also enjoy finding new applications of SAP solutions. You might have seen some of our work during the recent TechEd 2009. In Phoenix we scored second place during DemoJam with our ThingFinder + MS Outlook = happier enterprise information workers. In Vienna, apart from Yowie Project, we also showed Gravity – Collaborative Business Process Modelling within Google Wave. What we didn’t show publicly was the “BNE Traffic” iPhone application, which was being reviewed by Apple for the AppStore.

BNE Traffic is a simple iPhone application that shows Twitter messages on a map. And it does it in a smart way – it uses SAP BusinessObjects Text Analysis technologies to understand the Twitter messages. As the name of the application suggests, it analyses messages about traffic conditions. BNE stands for Brisbane, location of one of the SAP Research centres where we developed the application.

The iPhone application is just a client of an advanced solution running in the Amazon cloud. Over there, we host a system that constantly monitors Twitter, searching for messages about traffic conditions in Brisbane. Once a message is found, we apply text analysis (provided by SAP BusinessObjects Text Analysis) to identify any mentions of a location in the message. Then, we turn the location information into geographical coordinates and save it together with the message. The iPhone application accesses the server, downloads all the messages and their locations, and – simple as that – shows them on the map. 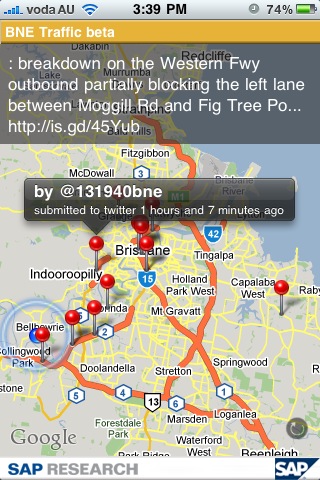 We did not originally build the application with traffic in mind. In fact, we built it to help ourselves during recent floods that hit Brisbane. Twitter was the best source of information if you were interested in finding out what was happening in various parts of the city, and Brisbane citizens sent more than 1200 twitter messages over 3 days of the floods. However, as we are a bunch of busy folks down here, it was too much for us to read every Twitter message so we were looking for a simple solution to make our lives easier. All we cared about were messages that were describing the situation between the office and our respective homes. So we thought – let’s do what we can do best – apply some SAP technologies! On the last day of the flood the server application was up and running, and we could finally spend more time on Faceb…well…I mean spend more time developing such tools as Gravity and Yowie Project. [update: the actual development of the server application to a stage when we could roll it out, plus building the iPhone application, took a bit longer than that]

You might still be asking yourself: why has SAP Research come up with a traffic application? What does it have to do with SAP? Well, the answer is pretty simple – with this application we want to demonstrate how flexible SAP technologies are. We want to show that, contrary to the popular myth, SAP is Web 2.0 ready. And we also want to show that in SAP Research we are eager to explore areas that are not currently covered by SAP solutions. But who knows what comes in a year or two from now? Our role at SAP Research is to try and take our best guess and have some fun in the process.

Oh, and by the way, BNE Traffic is the first ever SAP application in the AppStore! 🙂

Click on the image below or here to go straight to the AppStore (you need iTunes). 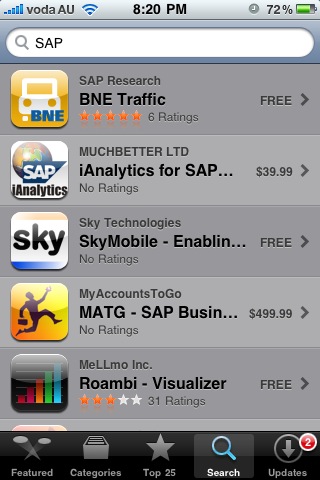 We are currently finalizing a version of the application which will include most of the major Australian cities. Stay tuned!

Very interesting, nice to see a real world example of SAP & Web2.0 in action (aside from that fact that I'm an Apple user). Out of curiosity, what is running in the Amazon cloud that provides the glue between Twitter and presumably the BOBJ Text Analysis services? Look forward to seeing how the community responds to this.

You're right, we have the BOBJ Text Analysis services running in the cloud. The glue between it and the Twitter is our own server application. It is heavily using twitter's APIs (specifically getting the messages in RSS). On the other hand it is using BOBJ Text Analytics as a web service (we have wrapped it in a RESTful interface). There's quite a bit of piping and storage of geo information (our own simple gazeteer) in the app.

With regards to the response - we didn't advertise it much in the first week, and still got a couple hundred downloads. Lots of request to include other cities, which we are doing now. At this stage our gazeteer covers Australia only.

Dan Everett
November 13, 2009 at 7:00 am
Text analytics, geospatial mashups, and some people still think SAP is an old stodgy company. 😉

I could see this being used by delivery companies, especially in large cities.
Or even field service personnel.

Simon Kemp
April 28, 2010 at 2:43 pm
This is great... fantastic innovation.... The only downside I see is people causing accidents by twittering or using the app while driving!

Former Member
Blog Post Author
April 28, 2010 at 2:53 pm
Thanks Simon! Of course to use your phone while driving is illegal in many countries (including Australia) and we do not encourage people to do so. The app should be enjoyed responsibly 🙂
(BTW: we're working on an improved version with some cool new features, it should be out soon)