What does Record Comparison mean? Earlier I used to become confused between Comparing and Matching of records in MDM but later I realised that there are many difference between both.Some of the key differences are:

1: Matching needs some preparation (You need to define some strategy, rules etc.) but for record comparison no preparation is needed.

We can compare records in MDM via two ways:

Important points associated with this concept are:

(a) For record comparison we have two options:Compare Records, Compare with original.

(c) The result that we get after comparison does not have fields that do not have values in any of the records to be compared.

(d) Comparison can be performed only in record mode.Using Data Manager directly is very simple just right click on the record to be compare in record mode and select the option (compare with original or compare record) accordingly. A pop up will appear containing the values of the fields. 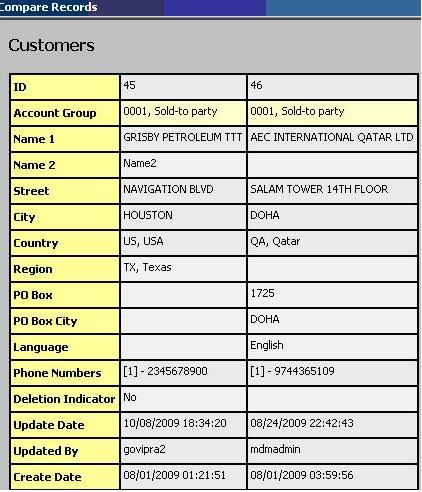 I have a requirement where in I have set of records which are chekedout.

After checking out. I need to compare each record with their original record. and high light the fields that were changed by the users who have checked out the original record.

Please can you advice on how I can use ComparisonRecordResultSet in this scenario.

In Data manager it highlights the fields which were changed.

Want to achieve this through portal.

Please can you help me in this regards.