I am sure that you know the “Four Yorkshiremen” Monty Python sketch. If you are not familiar with it it involves four old gentlemen reminising about the times past when “times were tough”. They each try to outdo each other getting more outrageous with story.

The final line is: “Don’t try telling that to the kids of today, they won’t believe you!”

We of course have it easy.

I remember rummaging through an old cupboard in a disused corner of a shed that finding a whole set of 78’s that may have belonged to my grandfather. These, of course, could be handily inserted in a portable 78 player and all the classics could be enjoyed as you walked around town.  To think that whole collection could now be stored on a microSD card with oodles of room to spare 60 years later is just astounding.

We could go on about the advance of technology for years. Lets look at us. SDN. Where have we come from. I am sure I have talked or written about this before but I remember stumbling across an early pre-beta SDN site in the middle of the night in 2003 and signed up to be a beta user. A month or two later I was sent my ‘P code’ . 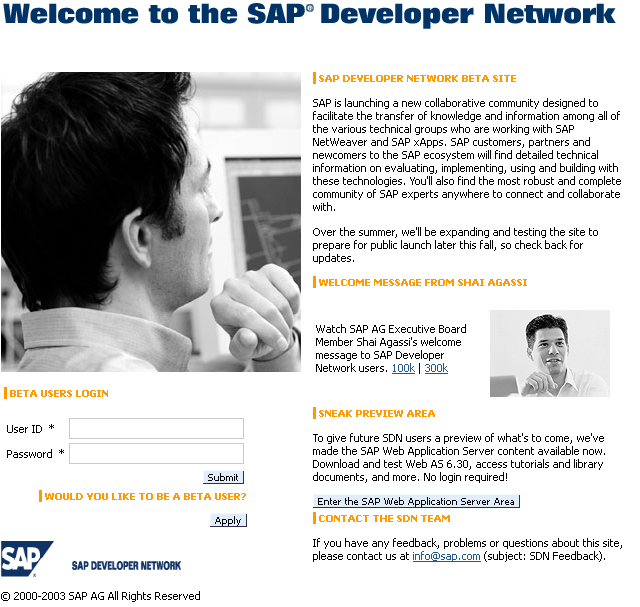 I initially signed up to get hold of the new download with WebDynpro demo. I thought that was the coolest thing since nitrous. I eagerly fought to install it on my company supplied laptop with 0.75Gb of RAM. Luckily I found this process Installing the new Netweaver Preview on later versions of the downloads.

That link, incidently, was my third blog and I got an email from Craig asking for a new photo. I didn’t and I found our why a little later that week as that blog post was mentioned on a SAP mail out. Cue me getting stirred at work. I have since updated my photo. My current one is from TechEd 2007 and I am wearing my majority desk – get your wiihands on!

Along the way I have become a blogger. When Marilyn approved my application I promised here I would not be the next Thomas Jung but would just be myself and write a bit about ABAP and coding etc. I think I have stayed true to that promise. I like to put my weird abstract sence of humour into what I write and I think I owe that to my Dad who was always (and still is) making strange jokes.

One day I sent Craig an email from something I had seen in the Microsoft community. Locally run developer days. After the fun of TechEd in 2007 Darren Hague and I put our heads together and come up with a SAP London Community Day – Saturday 26 April 2008.  This year we did the SAP Inside Track London Event 2009 – Review after rebranding them ‘Inside Track’ and a lot of the European mentors came along, including the Dennis Howlett who brought his InsideTrack London: IBM presents sMashInsideTrack – Oliver Kohl’s WordPress plug-in

It has been great to see these events taking off around the world. Organised by SAP Mentors, supported by local companies and open to all.

The official community day has now gone virtual. This year there were very many great talks and unfortuately I could only attend a couple in person but all the recordings are available.

The site itself has improved. The blogging experience has New toys for the bloggers with TinyMCE and to think that we had to do strange things in the The 1-2-3 Steps To Producing a Weblog.

“Just try telling that to the kids of today and they won’t believe you.”